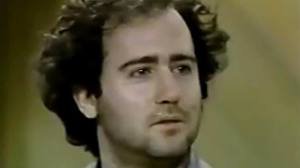 Andy Kaufman is a better candidate for a Levinasian inversion of the comic target, which I mentioned at the outset of this blog series.   He is a “stand-up” (as opposed to Portnoy, Philip Roth’s “sit-down”) comedian.  In a Levinasian sense, this means that he stands-up and faces us.  And we see, in his response to our laughter, how we are targeting him.  This comes out in our ambiguous relation to the character.  I have two videos that illustrate this.

The first video comes from a stand-up routine in LA.

Four minutes into his routine (actually 4:30), Kaufman is accosted by someone in the audience who targets him as a washed-up comedian.  He tells him that Kaufman’s routines don’t “work” anymore.  Kaufman has no new material.  The audience member makes Kaufman sweat and we can clearly see that he is the target.  In these moments, we don’t know whether we should feel sorry for him or not.  Has he failed to keep us excited?  How do we judge him?  Is our judgment too painful to even deal with?

Another example, which is more to the point, comes from an appearance he made on the David Letterman show (June 24, 1980).

In this clip, Andy is clearly out-of-his-wits.  And this deficiency turns the tables on us.   We don’t know whether or not he is really suffering.  This comes out, first, when he tells the audience to stop laughing.  But it comes out most clearly when Kaufman goes out to the audience for alms.  In this moment, he confuses the target and exposes the audience to its targeting.  He has them realize that they may be complicit in such targeting by disarming it.  He differs from Portnoy, who I discussed in yesterday’s blog entry; Kaufman is a schlemiel of a different variety.  His failure takes on another shade, altogether.

Emmanuel Levinas’s philosphy can be applied to both Roth and Kaufmann.  In Roth, the multiplicity of targets and the total disregard for responsibility make Portnoy into a caricature and a target of humor.  He makes us forget about his vulnerability and exposure by targeting his mother, sexuality, and Naomi (a Sabra who dubs him a schlemiel, in the most derogatory sense).   And in looking at him as pathetic (as Naomi does), we are complicit in this effacement.  The problem with this is, as I noted in the last blog entry, it requires an interpretation.   Moreover, for this reason, it’s easier for us to turn to traditional philosophical interpretations of comedy which are based on targeting.

On the other hand, with Kaufman we can see that we are complicit, quite simply, by seeing Kaufman’s responses to the audience and to his pleas for help.  In both, our judgment is suspended and the target is inverted.  We feel obligated to help, but we don’t know if or how we should.  Kaufman’s schlemiel – as opposed to Roth’s – acts to suspend the target rather than, as we saw in Portnoy, to mark it.

The Problem with Levinas’s Reading of Comedy

Levinas’s concept of inversion works; however, his understanding of art and bewitchment, which we see in his essay “Reality and its Shadow,” need revision.  The “meanwhile” – comedy without interpretation – implies that comedy, in itself, is mythology.  However, I would argue that there is a distinct difference between the “sit down” and the “stand-up” comedian; the former can, perhaps, be “bewitched,” but the stand up comic cannot.

Levinas argues that comedy, like tragedy, can “bewitch” a reader or viewer.  The reason for this is because comedy (like tragedy or any story) is, for Levinas, about endless repetition. In Henri Bergson’s sense, comedy doesn’t become; it is static.  Levinas goes farther than Bergson to associate the static aspect of repetition with “mythology” and being “bewitched.”  The time of myth is the time of what he calls the “interval” or the “meanwhile.”  For Levinas, it’s time is the time of myth.  The only way out of this is through interpretation.

As I have suggested, this may be applied to Roth but not to Kaufmann.  In the latter, one leaves mythology by virtue of relation not interpretation.  Our relationship to “stand up” (rather than “sit down”) comedy is ethical.   And in this comic relationship with Kaufmann, we are exposed to our targeting.  He is released from the meanwhile and given over to becoming by virtue of our confused response to his confused response.  We bear witness to the fact that we are complicit in targeting and that we may NOT be able to help the other.  In Roth, on the other hand, we see Portnoy caught up in his own targeting.  And his effort to efface that targeting by enjoying his “impotence” may wound the target but, ultimately, they set the character into an endless repetition of failure.  Nothing changes for Portnoy except for his words.

In Levinas’s reading of Don Quixote, which can be found in his Sorbonne lectures of 1976, he notes that although Quixote was “bewitched” by images and imaginings, he was awoken from his slumber in images by virtue of the “hunger of the other man.”  This hunger reminds Quixote that he was bewitched.  With Stand Up comedy, I would suggest that we come to learn that we are the one’s who are bewitched with the power of consciousness and targeting.   And this is the case because, with Kaufman’s “stand-up,” we see the suffering of the comedian; we literally see his hunger communicated by way of comedy.

To be sure, Andy Kafuman uses comedy to expose us to how bewitched we are by violence.  Strangely enough, all of the theories of comedy we evaluated at the outset confirm our fascination as these theories are all based on targeting and the superiority of reason, consciousness, madness, etc.  These theories are challenged by the one I am proposing and by virtue of a comedy like Kaufman’s which turns the tables.

Schlemiels are well-known for missing their targets.  And, in the scenario I have just drawn up, it is fair to say that when Kaufmann misses the comic target, so do we.  And this comic failure can have ethical effect if and only if the comedian exposes us to his vulnerability and its relationship to violence.  Comedy of this nature, as opposed to comedy that is obsessed with targeting, can loosen the grip of reason, culture, and masculinity over all of us.  In other words, it can release us from the superiority espoused by comic theories from Socrates to Paul deMan.  Comedy, by inverting the target, can expose us to the hunger of the other man.  And this possibility, I would argue, resides in the very character that makes Portnoy into a target: the schlemiel.

Yes, indeed, the schlemiel is here to stay. But we still need to ask whether the schlemiel is a “sit-down” comedian or “stand-up” comedian.   Comedy of the latter variety can be ethical, while comedy of the former variety may not be.  However, as we can see in many comedians today, some “stand-up” comedians are really “sit-down” comedians.  And, strangely enough, these kinds of schlemiels never miss their target (even if it is themselves).