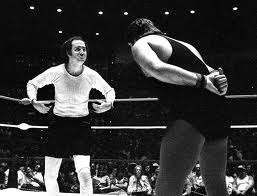 “Eternal nothingness is O.K. if you’re dressed for it.” (Woody Allen)

Comedy is inseparable from targeting.  Take a look at any joke and you will notice that it most likely has a target.  And, sometimes, the comedian or author may make him or herself into a target.  Whether one targets oneself or a target other than oneself, the target spurs those who laugh (in the audience) to feel or bear witness to some kind of superiority.  To be sure, the philosophy of comedy translates targeting into theory.  From Immanuel Kant and Thomas Hobbes to Henri Bergson and Charles Baudelaire we see the same gesture which posits a subject who (or which) is superior to the person or idea which is the target of this or that joke.

Even dialogical forms of comedy work on a similar premise of targeting and overturning – inter-subjectively and dialogically – this or that idea or object by way of inversion.  We see this, for instance, in Mikhail Bahktin’s theory of the carnivalesque in which low culture dialogically subverts high or dominant culture by way of comic parody.  And even when a theorist like Paul deMan argues, in his essay “The Rhetoric of Temporality,” that the “irony of ironies” short-circuits both inter-subjectivity and subjectivity, the fact remains that both inter-subjectivity and subjectivity are, for deMan, the true targets of comedy.  For him and, as he claims, for Charles Baudelaire, “essential laughter” makes one “mad.”   It makes one experience a kind of subjective vertigo which occurs in the wake of nihilation wherein no meaning remains (whether that meaning was shared and inter-subjective, a concept, or the elevation of reason over its target).  Comic (or is it tragic) madness takes meaning and the self as its ultimate targets.  And in its wake, nothing save anxiety, despair, and dizziness remain.

Instead of seeing comedy as destroying one target or another, I would like to suggest a reading of comedy that is based on being, as the philosopher Emmanuel Levinas might say, traumatized and inspired by the (other) comedian.  In the reading I would like to suggest, the comedian effaces the target and turns the act of targeting back on the audience.  (He doesn’t target them so much as expose them to targeting as such.)  To explore this notion I would like to address two particular kinds of comedy: Phillip Roth’s “sit-down” comedy (articulated through Portnoy of Portnoy’s Complaint) and the “stand-up” comedy of Andy Kaufman.  In the comedy they put forth, the audience and the reader may become uneasy and uncertain of themselves and their subject. They may not be sure if the comic subject needs their help and if they have anything to do with his or her humiliation.  The audience or reader, in short, is comically called into an ethical relation with an otherness that exposes them to relations of force.  And this gives them an acute sense of responsibility since they are caught up in this web of relations.  Their humor, to be sure, has high stakes.

However, as I look to show, Roth and Kaufman fundamentally differ in the sense that in Roth the targeting doesn’t go far enough and may fall into what Levinas calls the “meanwhile” while in Kaufman the target is inverted.

Since the position of the comedian is one that includes ridicule and rejection, the audience’s responsibility is faced with the question of what it means to be implicated in an act of (comic) violence and what one can do about it.  But can one really do anything save bear witness?

The audience is exposed to the targeting that aims at the comedian.  Ultimately, there is a “madness” that comes with this brand of comedy but it is not, as deMan held, private and deeply subjective; it is shared publicly and, in a Levinasian sense, asymmetrically between the comedian and the audience.  And this madness, which is comic, marks one’s ability to respond. The madness of comedy is not, as deMan would hold, a private madness which is devoid of any relation anything remotely ethical; on the contrary, the madness of comedy is a “madness of responsibility.”

I would suggest – by way of Roth and Kaufman – that this general kind of comic responsibility is particular to the schlemiel – the Jewish fool.   Both Roth and Kaufman are, without a doubt, drawing on this character albeit in different ways.  The schlemiel, for some Jewish writers, is a comic target that must be ridiculed and left behind; for still others, it should not be left behind since it has an ethical effect, it inverts the comic target and awakens the asymmetrical relation between the comedian and audience.

On the one hand, we see the target a challenged form in Phillip Roth’s Portnoy and, on the other, we see it vindicated by Andy Kaufman.  Because both are targeted and because they deflect this targeting on the reader or audience, their comedy gives special attention to the target.  And this creates a kind of madness.  Comic responsibility is mad because it includes laughter, ridicule, and exposure to the other.  It marks the inversion of the target and opens up a new way of understanding comedy, philosophically.

Before we can understand the inversion of the comic target (in a Levinasian sense), we first need to understand how the comic target has been theorized.  To this end, I will make a brief survey of the philosophical theories of comedy from Socrates and Aristotle to Henri Bergson and Paul deMan.  Each of them understood the target of comedy in terms of one superiority or another: “élan vital,” Culture, Reason, consciousness, congruity, beauty, madness, etc.  To be sure, upon close reading, we can see that, in the philosophy of comedy, there is a common thread which spans the classical-Greek philosophers, the European Enlightenment, and European modernist.  And that thread is held together by the fact that all of them understand comedy in terms of this or that target.

In my next blog entry, I will address these positions.

2 thoughts on “Comic Exposure to Targeting: A Levinasian Reading of Andy Kaufmann and Phillip Roth’s Portnoy (Part I)”