Yesterday, I was interviewed by Matthew Mausner – the host of the “Left In Podcast.”  Our conversation was a breath of fresh air.   The atmosphere he creates in his podcast is conducive to real, honest conversation.  We both believe that open conversations on podcasts can bring us to places we’ve never been.   In today’s world – where most conversation is pre-digested though social and political group think – we are looking for something fresh and new.  Like Socratic, wandering philosophers, we are looking for some kind of truth that can emerge out of dialogue.

The podcast is broken into two parts.

In the first part, we discuss my personal experiences in the academy. Has the new socio-politcal aspect that has become the lens through which to read most – if not all – subjects in the humanities? Has it overshadowed a lot of scholarship? What has happened to what once was called the “diversity of thought,” socratic conversations (in search of truth), and the importance of freedom and singularity in our institutions of higher learning? Is everything political?

In the second part of the podcast, we discuss a new kind of litmus test for testing the dogma circulating these days all around us.  Laughter at oneself is the best place to start; it is the bar of all bars in our post-post-modern culture. Are people who can’t laugh at themselves our greatest challenge today? 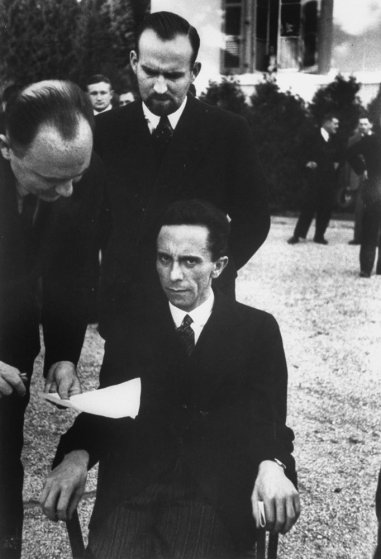 For a long time, I’ve been thinking about how to read photographs of schlemiels like Woody Allen, Seth Rogen, Charlie Chaplin, etc.  What function do they serve? How do we identify with them?   How do they relate to the lives of Americans and Jewish Americans?  What categories do we use to read them?   But when I recently came across a photo of Goebbel’s – Adolph Hitler’s Minister of Propaganda – staring into the camera of Alfred Eisenstaedt, a Jewish photographer, in 1933 in Geneva, I was hit with some powerful questions about not just the subject of photography, but it’s relationship to identity.  A friend suggested that Goebells’ gaze changed when he realized that a Jew was photographing him.  This reflection from Eisenstaedt seems to have come from himself, in an article from Time Magazine in 2014:

In 1933, I traveled to Lausanne and Geneva for the fifteenth session of the League of Nations. There, sitting in the hotel garden, was Dr. Joseph Goebbels, Hitler’s minister of propaganda. He smiles, but not at me. He was looking at someone to my left. . . . Suddenly he spotted me and I snapped him. His expression changed. Here are the eyes of hate. Was I an enemy? Behind him is his private secretary, Walter Naumann, with the goatee, and Hitler’s interpreter, Dr. Paul Schmidt. . . . I have been asked how I felt photographing these men. Naturally, not so good, but when I have a camera in my hand I know no fear.

At another point, Eisenstaedt noted that “this picture could be titled, ‘From Goebbels With Love.’ When I went up to him in the garden of the hotel, he looked at me with hateful eyes and waited for me to wither. But I didn’t wither.”

On the one hand, it seems as if he has projected this reading on Goebbels; on the other hand, it may be true.  Perhaps Goebbels recognized the photographer as a Jew.   There is an ambiguity to this photograph and its gaze for the not only the photographer, but for myself.   Regardless, the photo communicates a kind of violence that looks back at the viewer.  For myself, as a Jew, I can’t help seeing this as the gaze of death (aimed, particularly, at Jews).    How do I make sense of this?  And how has this violent challenged my view of photos of schlemiels – of “gentle Jews” (as Paul Briens would say in his book Tough Jews) –who confirm a certain and vital aspect of Jewish American identity?

In her book On Photography, Susan Sontag takes a very negative position on photography arguing that instead of simply enlarging existence – in a Whitmanesque sense and democratizing the camera – photography has an underlying kind of violence.   Drawing on the 1960 movie, Peeping Tom, she argues that there are “connections between impotence and aggression, professionalized looking and cruelty, which point to the central fantasy connected with the camera…However hazy our awareness of this fantasy, it is named without subtlety whenever we talk about “loading” a camera, about “shooting” a film”(13-14).    This violence, avers Sontag, works on a political and ideological level:

A capitalist society requires a culture based on images.  It needs to furnish vast amounts of entertainment in order to stimulate buying and anesthetize the injuries of class, race, and sex.  It needs to father unlimited amounts of information, the better to explant natural resources, increase productivity, make war, give jobs to bureaucrats. The camera’s twin capacities, to subjectivize reality and to objectify it, ideally serve these needs and strengthen them.   Cameras define reality in the two ways essential to the workings of an advanced industrial society: as a spectacle (for masses) and an object of surveillance (for rulers).  The production of images also furnishes a ruling ideology.  Social change is replaced by a change in images.  (178)

For Sontag, “cameras are the antidote and the disease, a means of appropriating reality and a means of making it obsolete”(178).     Her insights on violence and photography – as well as its antidote – don’ t seem to address the violence that comes out of the photo and toward the viewer.  The photo may create some distance from the past, yet, at the same time this one reminds us of murder and seems very present.

In his book, Camera Lucida, Barthes suggests something different about photographic violence.  The photograph, for him – as it was for Walter Benjamin – is shocking and surprising:

I imagine…that the essential gesture…is to surprise something or someone (through the little hole in the camera), and that this gesture is therefore perfect when it is performed unbeknownst to subject being photographed.  From this gesture derive all photographs whose principle….is “shock”; for the photographic “shock” (quite different from the punctum) consists less in traumatizing that in revealing what was so well hidden that the actor himself was unaware or unconscious of it.  (32)

When I look at Goebbels’ gaze looking at me, however, I wonder if it would shock him to see that he has a murderous look (possibly) for the Jewish photographer.    The shock is for me.

Not only is the Photograph never, in essence, memory….but it actually blocks memory, quickly becomes a counter-memory….The Photograph is violent: not because it shows violent things, but because on each occasion it fills the sight by force and because in it nothing can be refused or transformed.  (91)

As Emmanuel Levinas says of the image, it is mythic and the essence of idolatry.  It repeats itself and cannot “become” or transform.  It cannot be refused; it cannot change.  In other words, what might make us uneasy about the Goebells’ photograph is that – regardless of how much we hate it – it “fills the sight by force’ and “in it nothing can be transformed.”  The only way, says Barthes, to transform it is to throw it into the garbage (93).    It isn’t so much a reminder as a mythic persistence that makes this photo so violent.

Be that as it may, Barthes notes that we linger over a photograph because it reminds us that it is there and that we have no power over its there-ness.  Its power is our powerlessness.   Barthes takes note of the “look” at the camera in these terms.  It has a (potential) kind of madness:

The Look is always potentially crazy: it is at once the effect of truth and the effect of madness.  In 1881, inspired by a splendid scientific spirit and investigating the physiognomy of the sick, Galton and Mohamed published certain plates of faces…It was concluded, of course, that no disease could be read in them.  But since all these patients still look at me, nearly a hundred years later, I have the converse notion: that whoever looks you straight in the eye is mad….it (the photograph) brings the effigy to that crazy point where the affect is a guarantee of Being (totality/truth).  It then approaches, to all intents, madness.  (113)

Barthes reading suggests that even a photograph of Woody Allen, Seth Rogen, or any charming kind of schlemiel character, has the same potential as a photograph of Goebbels.  Both gazes cannot be refused and both put forth a potential kind of madness. 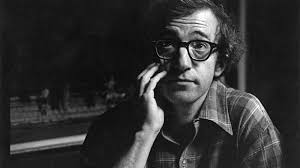 Yet, on the other hand, both photos can be read, as Peter Berger does, in terms of social signification.   When I see Goebbels, I see the anti-thesis of Woody Allen and many a schlemiel character.  I see power and violence in one photo and gentleness and powerlessness in the other.    However, while we see photos in terms of this or that social context, Barthes is right about the madness that they invoke as is Sontag.  They are disease and the cure.   They remind us of our powerlessness and of a kind of “madness” and violence that are inevitable.  Goebbels photo hits on all of these levels.  Whereas a photo of Woody Allen reminds us of Jewish-American vulnerability.   Both speak to the positon of a particular viewer, photo, and subject.

I’ll end with a fragment from a John Ashberry poem, “Self-Portrait in a Convex Mirror” which looks at the gaze of a painting (not a photo) in a different manner and, like Barthes, suggests something shocking that won’t go away and persists in the “space” of our attention:

But there is in that gaze a combination

Of tenderness, amusement and regret, so powerful

In its restraint that one cannot look for long.

The secret is too plain.  The pity of it smarts,

Makes hot tears spurt: the soul is not a soul,

Has no secret, is small, and it fits

Its hollow perfectly: its room, our moment of attention.

That is the tune but there are no words.

The words are only speculation.

(From the Latin speculum, mirror):

They seek and cannot find the meaning of the music.