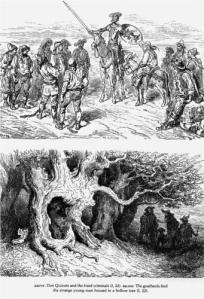 To be distracted and become absent minded, is so to speak the condition of the possibility of the schlemiel. Walter Benjamin knew this lesson very well.  He learned if from Kafka, who learned it from Sancho Panza and Don Quixote.

In other words, Benjamin, like Sancho Panza, literally spent the “end of his days” following around a schlemiel named Franz Kafka.  And in this, he became very distracted and absent-minded himself.  After all, a reflection without penetration is the manner of the schlemiel.  And in response to it, one will either die laughing or “come laughing.”  Benjamin, near the end of his life, imitated the ways of Sancho Panza who imitated the ways of Don Quixote (a fool).

With Benjamin, we know that he took the modern Don Quixote, Franz Kafka, as his last teacher.  Gazing upon Kafka’s text, Benjamin knew, as he said in one of his last letters to Gershom Scholem, written on June 12, 1938, that Kafka was correct about two things: “first, that someone must be a fool if he is to help; second; only a fool’s help is real help.”  However, as Benjamin mused:  “the only uncertain thing (the only question) is whether the fools help will do humanity any good.”

Indeed, that is the ethical question of the schlemiel.  And this is the question I have been asking in the last two blog entries.

Benjamin was the first to reflect on it.   And while Derrida is on to the tragic or comic manner of the schlemiel, unlike Benjamin, he does not pose this ethical question (at least not in his language phase).  Benjamin does.  Benjamin wonders whether the attention given to learning the wisdom of the fool, the manner of the schlemiel, can do humanity any good.   The same question applies to the ways of deconstruction and to learning the manner of the foolish (schlemiel) text.

If such a way of reading of the text doesn’t do humanity any good, will it be rejected?  And in the name of what?  The politician?  The philosopher?  How, Benjamin queries to Gershom Scholem, could they help?  The only one who “can help is the fool.” As Benjamin says in the same letter to Scholem, perhaps the only wisdom “is the wisdom of the fool.”  But, perhaps, as Kafka suggests, Benjamin was wrong.   Perhaps it isn’t wisdom that Sancho Panza gleans from the fool so much as entertainment (which Sancho Panza, a philosopher of sorts, enjoys until he dies…laughing). But, then again, Kafka muses that he may have followed him out of a sense of responsibility. This would imply that following the schlemiel is an ethical act of sorts. So…which is it? Ethics or entertainment? Both?

Let’s ask again: Will the wisdom of the fool, of Don Quixote, the schlemiel, do humanity any good?

On this blog, it is imperative that we pronounce this question in different ways.   It’s inescapable.  This question emerges out of an endless reflection on the “reflection without penetration.” It emerges out of paying very close attention to the “manner” of the schlemiel. Paraphrasing Paul Celan, who paraphrases Walter Benjamin, who paraphrases Malbranche: attention (to the schlemiel) is the silent prayer of the soul.

1) Can the attention that Sancho Panza (Walter Benjamin or Jacques Derrida) gives to Don Quixote (Franz Kafka or the Foolish Text) and his foolish ways do humanity any good?

2) What can we learn from the examples of Sancho Panza and Walter Benjamin? Did they seriously imitate their schlemiel teachers or did they laugh at them and themselves for imitating them?