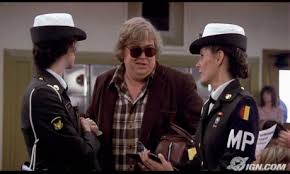 I grew up watching – and loving – many Harold Ramis films.  I recorded them on my VCR from this or that HBO showing or bought the video tapes.  Watching them, I felt as if he was hitting on something deep about being an American in the 80s and 90s.  And because I was pre-pubescent when I first saw his films, I felt as if the odd romances in films like Stripes, Ghosbusters, or Caddyshack taught me about what kinds of love, friendship, or kindness worked or didn’t work.  But, in the end, what I learned about love by way of Chevy Chase, Bill Murray, or Ramis himself was that it was a comical affair.  If it worked, it worked in an odd way.

All of his best characters are clumsy, charming, and witty.  For someone who – like millions of Americans – learned about the “birds and the bees” from TV and film, rather than his parents, they gave me an image of the kind of American male I could be: a comic male who was at once awkward, bold, and witty.

These characters, to be sure, bear aspects of the schlemiel.  Like Woody Allen, they are what David Biale – in his book Eros and the Jews – would call “sexual schlemiels.”  However, they are different: they are more charming and popular than Allen’s characters.  To be sure, Allen’s schlemiels are appealing to a more sophisticated audience while Ramis’s appeal to a more common and simple element.  In many ways, he has done more than many comedy writers in the 1980s and 90s to popularize the sexual schlemiel for a different generation (not a baby boomer generation that was more acclimated to the likes of Woody Allen and Phillip Roth).

In my heart, I felt I was a combination of Groucho and Harpo Marx, of Groucho using his wit as a weapon against the upper classes, and of Harpo’s antic charm and the fact that he was oddly sexy — he grabs women, pulls their skirts off, and gets away with it.

As this admission suggests, Ramis saw himself in terms of both Marx Brothers.  He saw the wit of Groucho as a manifestation of the popular-will to battle against the elites (“upper classes”). The other side of Harold Ramis was his desire to be “oddly sexy.” Taken together, we have a sexual schlemiel and a schlemiel that challenges the elites.   And this is not just how Ramis painted his characters; this is how he saw himself as a comic and as a human being.

In other words, he saw himself as a living schlemiel whose actions had a social effect that could appeal to the people and perhaps even change society.  His characterization of himself has an interesting resonance with Hannah Arendt’s characterization of Charlie Chaplin (in her essay “The Jew as Pariah”) whose charm and wit appealed to immigrants and, in her words, challenged the status quo.

Harold’s wit and charm will be missed.  The legacy he left for us can be felt in this scene where he comforts Seth Rogen in Knocked Up.  Unlike the WASP mother, Ramis plays a character who is happy to have a grandchild.  His affirmation is an affirmation of life and this, as anyone who has seen the film knows, inspires Rogen to become a father.  However, the twist is that Rogen goes from being a schlemiel to being a dad.  And the only thing that remains of the schlemiel is kindness.

But that’s not the take-away.  Ramis goes against the grain in this piece because –  in explaining what is worse than having a child – he tells us something that we should be keen to; namely, that it’s worse to have a parent with alzheimers than to have a child out of wedlock.

In other words, the worst thing that can happen to us is that someone we love should forget who we are.

What Ramis has done through his charming and witty characters is to create a memory that is at once personal and American: the memory of all his schlemiels evinces both.  And even though these schlemiels may be born, so to speak, out of wedlock, they are redeemed by the reader.  This is a lesson Sholem Aleichem taught to his readers in his last novel, Motl: The Cantor’s Son.

In that novel an orphan-schlemiel – who is absent minded and who doesn’t understand death or suffering because he is distracted by life – lives on in the memory of the reading public.

Like the reading public’s memory of Motl, Ramis’s schlemiels live on in the memory of those who enjoyed and laughed at his charming and witty characters.

Thanks for reminding us of how dear the schlemiel is and how its legacy should be carried on!  You will be missed by millions of people who enjoyed your films; many, like me, who looked to them for a kind of “parental guidance” about sexuality that I couldn’t find in my home.

Seth Rogen gets his parental guidance in this clip from Ramis, a schlemiel and a father of a schlemiel, whose advice gives Rogen hope.

For Ramis, the key ingredient of being a schlemiel is to be witty and “oddly sexual” but also to be a father and make your own father happy.  In other words, to give the parents “nachas” (Joy in Yiddish and Hebrew) is Ramis’s last Jewish word to Seth Rogen. It also the last word on the schlemiel.

As the schlemiel and son of a schlemiel, his job is to remember the schlemiel father through being a father…and raising a son….which, after all, emerges out of an accident: over someone getting “knocked up.”  Ramis’s encouragement of Rogen teaches us that Something good can come out of something accidental and potentially bad; and that, for Ramos, is the ultimate meaning of comedy. It is Ramis’s message to Seth Rogen and the next generation of schlemiels. It is his “parental guidance.”