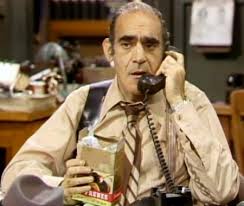 Whenever I saw Abe (“Avraham ben Moshe”) Vigoda on TV or in this or that film performance, I felt as if I was seeing a member of my family. He had something familiarly New Yorkish and….Jewish in his disposition and bearing.   And it recently struck me that what always drew me to him was the fact that he reminded me of my maternal grandfather.   He was a six foot four Jew who, like Vigoda, was born and raised in Brooklyn.   His parents, like Vigoda’s, were Jewish immigrants. And, like Vigoda, he was a hardworking mensch.   But what struck me most about Vigoda was the fact that whenever I saw him I started thinking about Jewishness in America.   Vigoda’s Jewishness – like my grandfather’s – was at times clear while others times ambiguous. But after watching Vigoda’s videos over the last few days, I have found how this cultural overlap speaks not just to something cultural but also to something existential and, for lack of a better word, Biblical.

The fact that Vigoda was casted in The Godfather as an Italian character speaks to the ambiguity of Jewish American identity.

His performance reminded (and reminds) me of the lore I heard from my grandfather and what I saw in different family members vis-à-vis the overlap of Italianess and Jewishness in New York City. It also spoke to difference. My grandfather told me that, growing up in Brooklyn, he was a part of group of Jews who played stickball and how, at times, his gang fought with Italians. The relationship, he told us, was uneasy. But I also learned that there was admiration between the groups. My relatives expressed similar types of experiences, too.  That aside, my father’s best friend and mentor (Dave Kaplan), also born and raised Brooklyn, would speak with an accent and a disposition that was a mix of Italian and Yiddish. And my father – who was born and raised in Manhattan – would imitate him as if to show me that, to be Jewish, a Jew needs to act in this ambiguous manner.   I remember how Dave Kaplan told me that this way of speaking and acting was Jewish. It was confusing for me because, since I was raised in upstate New York, I found no cultural correlate except for these two New Yorkers.   This was my first dose of the Judaism versus Jewishness thing.   And, as a kid, it gave me a lot to think about.

While my father and Dave displayed a kind of Jewishness, that was more oriented in “making the deal” or capturing the attention of listeners to this or that story (Kaplan always told us that his father was a wandering storyteller and that’s where he got the knack to tell stories all the time….about everything imaginable; he’d start nearly every conversation with the words “Get this…” and with a prophetic touch “I can see it now”), my grandfather’s version of the New York Jew was much different. It had a lot in common with what I saw in Abe Vigoda. My grandfather’s Jewishness could be found in his way of dealing with family, people, and responsibility.

When I came across the pilot of Fish, which cast Vigoda as the lead, it all made sense.   In this episode, I saw his embodiment of cultural ambiguity, family, finitude, and existential responsibility. Most importantly, his performance brings out a kind of Biblical sense of commitment that is emblematic.

In the pilot, Vigoda plays as a man who should be retired but who, because of his wife’s prompting, has agreed to take on the role of being a father to several foster children. As one can see from this clip, the responsibility is enormous. Vigoda is able to show the weariness that comes with taking it on. In a key scene with his wife, we see this weariness and the challenge he must take on if this is to work: “You made a commitment….you have to honor your commitment…You made a commitment when you joined the police force…you made a commitment when you married me”(9:23-9:40).   This commitment, to be sure, evokes the biblical theme of the covenant.   And it suggests a kind of existential responsibility that is not the kind of responsibility we find in Friedrich Nietzsche or in Jean-Paul Sartre so much as in the pages of the Bible which display individuals and a people which has a hard time with keeping commitments but, despite it all, manages to keep them.

And this is the Jewish moment. Vigoda, in his hesitancy, embodies, simultaneously, a resistance to and a deep sense of responsibility to the concept of family and taking care of strangers. It is this weariness, which he gradually works through, that is most touching. And it is touching because it is the same kind of struggle we see throughout the Bible (Torah).     He embodies this tension between cynicism (just giving up) and the joy that comes with helping orphaned or abandoned children to have a sense of trust and hope that being a part of a family can foster. This is something Vigoda shares with my grandfather; who taught me in how one must, despite all the odds, keep the family together. I realize now that this is not something that New York Jews do (it is not just a cultural practice); it also has a covenantal dimension.

Maimonides, Wyschogrod insists, introduced extraneous influences into Judaism, partly in an attempt to reconcile Jewish religion with Aristotelian philosophy. Wyschogrod argues that Judaism concerns not a philosophical doctrine but rather God’s unique and preferential love for the flesh-and-blood descendants of Abraham. The election of the Jewish people is the result of God’s falling in love with Abraham and founding a family with him. And, out of passionate love for Abraham, God continues to dwell among the Jewish people. Maimonides, in Wyschogrod’s account, deviated from the biblical view to accommodate Aristotle’s philosophy.

By seeing the relationship with Abraham in terms of “falling in love” and “founding a family with him,” Wyschogrod suggests a more literal and less philosophical/allegorical reading of the covenant.

Although Vigoda is ambiguously Jewish in this episode (in Barney Miller, The Godfather, etc), Wyschogrod would argue that there is still an embodiment of Jewishness in the struggle he has with commitment.   Wyschogrod’s comments are, of course controversial, but they give a lot of food for thought.   They also speak to the question I have always had about Jewish embodiment as a child.

As a child, I always wondered: who embodies Jewishness? Was it my father, David Kaplan (his mentor), my Grandfather, my soft-spoken Rabbi in upstate New York ((I haven’t mentioned him, and I should have; he was a Jew from New York who had lost his New York accent and adopted a more intellectual approach to Jewishness), or Abe Vigoda?

Now I have a clearer sense of how it may be the case that the embodied commitment to family and others – which, in my family goes back generations – may have a biblical (and not just a cultural) dimension.   The fact that several people I know (and don’t know) have said that they can’t believe that Abe Vigoda died because they thought he would “live forever” is very telling. I can’t help but read this comment in terms of a kind of eternal steadfastness to staying in there and trying to keep the wife and the kids happy. Wyschogord is correct: family life does have a Jewish theological dimension.   The question, today, with so many disaffected Jews is whether they can keep or want to keep the family together. Regardless of their decision, they must struggle with it. This is something we find in Jewish American writers like Philip Roth, Shalom Auslander, and Gary Shteyngart (amongst countless others) or in an actor like Seth Rogen.  Embodiment matters for many Jewish comedians.

Thank you Abe Vigoda for giving me a sense of my Jewishness and how it is embodied. Like my grandfather, you were a model for this Jew born in (what my dad and David Kaplan called) “the sticks” and in front of a television. I could never be a New Yorker like them, but I could, at the very least, make family commitment (in the larger sense) the existential foundation of my embodied Jewish-American existence.