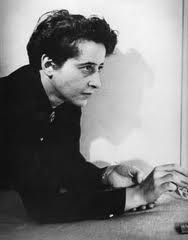 Reading through a 1964 interview between Hannah Arendt and Gunter Gaus, I was struck by Arendt’s responses to Gaus regarding the question as to whether or not Jews were apolitical and worldless.  Gaus was prompted to ask these questions because of Arendt’s comments on her relationship to the “Jewish people.”  With this in mind, Gaus (who is Jewish) asks Arendt the following question regarding politics and the “commitment to a group”:

As a politically active being, doesn’t man need commitment to a group, a commitment that can then to a certain extent be called love?

In response to this, Arendt notes that belonging to a group is a “natural condition.” And as I pointed out in my last blog entry on Arendt, the “second birth” is (for her) greater than the first birth (or what she calls here a “natural condition” – namely, the fact that she was born Jewish).   By “second birth” Arendt means an “act” in which we “insert ourselves into the world” and become a “who” rather than a “what.”

On this note, Arendt says that the “act” of “joining or forming” a group is “something completely different” from the “natural condition.”  And in doing this, one enters the world: “The kind of organizations (one forms or joins) has to do with a relation to the world.”   But in contrast to this, both love and friendship are not worldly.  They are more natural, and, by her clock, less important.  She notes the worldlenssness of love in The Human Condition when she writes of the Christian “political principle” which is a “bond of charity between people”(53).  This founds a “public realm of its own” but is “worldless” because it is based on love. Arendt goes so far, over there, to say that this “bond” “is admirably fit to carry a group of essentially worldless people through the world, a group of saints or a group of criminals, provided it is understood that the world itself is doomed” and that every act is provisional.  As she points out there, this is antithetical to the Greek (pre-Platonic) understanding of action and it’s relationship with the world.

Hearing Arendt’s reading of the worldless apolitical nature of love and community, Gaus pushes her to further explain what she means.  In response, Arendt describes the Jewish people in the same way as she describes the Christian community’s worldlessness (which we cited above):

I admit that the Jewish people are a classic example of a worldless people maintaining themselves through thousands of years.  (17)

In response, Gaus asks if by “world” Arendt means her “terminology for the space of politics.”  Arendt agrees to this formulation but Gaus pushes her to explicitly say that the Jewish people were “an apolitical people”(17).   But she won’t.  To be sure, she revises her original formulation of the Jewish people as worldless and shows that her reading of the “Jew as Pariah” has limits and conditions:

I shouldn’t say that exactly, for the communities were, to a certain extent, also political.  The Jewish religion is a national religion. But the concept of the political was valid only with great reservations.  The worldlessness which the Jewish people suffered in being dispersed, and which – as with all people who are pariahs – generated a special warmth among those who belonged, changed when the State of Israel was founded. (16)

But at this moment of the interview Arendt does lament the loss of some kind of Jewishness:

Yes, one pays dearly for freedom.  The specifically Jewish humanity signified by their worldlessness was something very beautiful.  You are too young to have ever experienced that.  But it was something very beautiful, this standing outside all social connections, the complete open-mindedness and absence of prejudice that I experienced, especially with my mother, who also exercises it in relation to the whole Jewish community.  (17)

What I find so striking about her reflection is that she speaks as if she has a strong grasp of what Jewish “worldlessness” – before the founding of Israel – felt like.  And instead of citing the pariahs and schlemiels she brought together in her famous “Jew as Pariah” essay, she talks about her mother and takes on a romantic kind of reflection on worldlessness: where everyone was “standing outside all social connections” and where there was a “complete open-mindedness and absence of prejudice.”

Read against this talk in the 1960s, her thoughts on schlemiels and Jewish ahistoricity takes on another dimension.   In an earlier essay entitled “The Enlightenment and the Jewish Question,” Arendt doesn’t lament the lost world.  She deplores it.  She notes that Jews, such as Moses Mendelssohn, had no grasp of history and the world.  For him “all reality – the world around us, our fellow men, history – lacks the legitimation of reason. The elimination of reality is closely bound up with the factual position of the Jews in the world.  The world mattered so little to him that it became the epitome of what was unalterable.”  He was “indifferent” to the “historical world.”

And in her essay on the “Jew as Pariah” – as well as on her work on Rahel Varnhagen – Arendt notes that Rahel, like other schlemiels, clung to “such universal things as the sun, music, trees, and children.” In other words, they clung to nature (to their primary birth) but not to history and politics (a second birth they couldn’t experience).

Although Arendt’s words on Varnhagen, Heinrich Heine, and Charlie Chaplin (amongst others) seem to be charming, they are ultimately for the dustbin of history.  She doesn’t want to go back.  She may find the worldlessness of Jews and Christian communities to have their charm, but their loss is what she ultimately calls the “price for freedom.”  And, for her, that price is paid with the founding of Israel as a Jewish State.

Regardless of what she says, however, I think that Arendt is missing something.  In her formulation, all worldlessness must be sacrificed in the name of the world and politics.  But can worldlessness ever be sacrificed?  Is the worldlessness of the Jews – which she thinks of as a thing of the past – gone?  If that is the case, why do we find so many Jewish-American writers, filmmakers, and comedians – after the founding of Israel – drawing on it in their schlemiel routines?  Are Arendt’s formulations of Jewish worldlessness and the end of such worldlessness too extreme and intolerant of any possibility of being both worldless and worldly at the same time?  Or is (political) history the ultimate judge?  And is the price unmistakable?

2 thoughts on “World(less) Jews: A Note on Hannah Arendt’s Descriptions of The World, Worldlessness, and Jewishness”