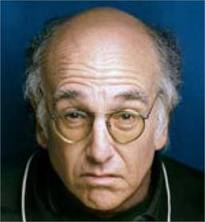 Comedians can be very aggressive and may sometimes exude rage.  The comic rant, which we are all-to-familiar with, is an illustration of how comedy sometimes becomes indistinguishable from anger.

One need only think of the Three Stooges, Larry David, Andy Kaufmann, Lenny Bruce, or even Louis CK to see how rage plays out through comedy.

Given the history of the schlemiel in Jewish comedy, this is an interesting phenomenon.  Traditional schlemiels – of the Yiddish variety – are often very humble and are not filled with rage; but, in America, we often see a different variety of the schlemiel which is more aggressive.

This difference is noteworthy and it prompts a lot of questions about how the schlemiel, a character which, by and large, is traditionally innocent and humble, became aggressive.

The trajectory of my blogs over the last week leads us toward a way of framing and addressing these questions.

In his unpublished work of maxims, insights, and aphorisms entitled “Central Park,” Walter Benjamin defines Spleen (which is also part and parcel of Baudelaire’s Prose Collection – Paris Spleen) as “the feeling that corresponds to the permanent catastrophe.”

Max Pensky, in his book on Benjamin entitled Melancholy Dialectics, interprets Spleen as a “mode of melancholia in which the subject can no longer mournfully ‘observe’ the permanent catastrophe of natural history, but rather, in a quite literal sense is the catastrophe”(170).

Pensky’s reading of Spleen, at many points, sounds much like Paul deMan’s reading of the “irony of irony” which I addressed in a recent blog.  But Pensky sees it as the source of Spleen and not simply, as deMan does, as the essence of laughter.  Pensky points out the emotional tonality of Spleen: it is an “emotional complex consisting of various permutations composed of the two simple elements of profound fear and rage: primal emotions, in keeping with the power of the commodity to awaken prehistoric, savage modes of existence”(171).

Moreover, “Spleen is characterized in the first instance as ‘naked horror’; that is, the primitive, infantile fear of being swallowed up by the mass of objects, the fear of flying to pieces, disappearance in the diffraction and multiplication of selfhood.”

The very language of this description – “the fear of flying to pieces, disappearance in the diffraction and multiplication of selfhood” – echoes that of Paul deMan’s description of the effect of Baudelaire’s “irony of ironies.”

But the main point is that Spleen prompts Baudealire to write poems and allegories.  It is through them that Baudelaire exhibits a “heroic melancholy.”  It is here that, I contend, we can find the modern, aggressive schlemiel.

To be sure, the fact that Pensky says that Spleen is pre-historical reflects Benjamin’s concern with the relationship of pre-history to history. This is a concern that we see in his writings on Baudelaire and in Benjamin’s essay on Franz Kafka where, I would like to note, we see the most explicit engagement with the schlemiel.  The pre-historic nature of the schlemiel, in that essay, is associated with the innocent aspect of this character; however, I would like to argue that his comic characterization of Kafka’s characters and their innocence is Benjamin’s response, in some way, to Spleen.

Evidence of this can be found in the fact that Benjamin, in several places in that essay, discusses Kafka’s characters in relation to pre-history.

In “Central Park,” Benjamin notes that Baudelaire’s poems and prose pieces are a response to Spleen.  Benjamin calls the trace of this response, or rather, this “heroic” struggle, a souvenir.  The artwork-as-souvenir exposes us to this trace while protecting us from its shock.  Nonetheless, the heroism is not complete.

The souvenir emerges out of the “endless catastrophe of capitalism.” As we have seen from Pensky’s description, this catastrophe destroys the subject. The souvenir is the only thing that remains and, like an angel, saves the artist from Spleen, that is, from impotent rage and self-destruction.

For some strange reason, comedy is the only response to Spleen that Benjamin doesn’t address in depth.  Rather, as we saw in our reading of Benjamin’s interpretation of Baudelaire’s “Essay on Laughter,” the only thing that remains for Benjamin of comedy, the only souvenir, so to speak, is the Satanic smile that touches everything, even children.  Although this seems devastating, it is not.  In fact, the smile, for Benjamin, seems to be a “double image” which protects him from the catastrophic effects of Spleen.  (As Scholem notes, Benjamin associated the smile with “satanic serenity.”)

More importantly, I would argue that the trace of the struggle with Spleen touches Benjamin’s image of himself as a man-child. To be sure, we can say that the image of his handwriting in the Goethe Dream (found in his “Vestibule” aphorism), which is written in loud, childish letters, is a souvenir.  It retains the trace of a struggle with Spleen.  It doesn’t overcome it. And this trace of Spleen can be seen if we simply reflect on the fact that Benjamin, in the dream, is the subject of a Prank!

In other words, his self-image – in terms of his name being written/signed in childish letters – is a souvenir.

Likewise, the souvenirs that Benjamin finds in Kafka’s world are also traces of a battle with Spleen.  In that essay, he relates Kafka’s characters to a Jewish form of Spleen:  Exile.

What all of these figures of the schlemiel share is the fact that all of them are, as Benjamin says in his Kafka essay, pre-historic.

The schlemiel and all traces of the struggle with Spleen are pre-Historic because they cannot enter history.   They cannot assert the heroic and enter the historical struggle.

In fact, this was the critique leveled by Hannah Arendt and many Zionists against a Jewish people which had “degenerated” due to exile.   They level this criticism against the schlemiel which was, for them, the figure of Exile.   As Arendt had argued, the Jews were to accustomed to powerlessness and Exile to take action and enter history.  (I will return to this in a later blog entry.)

For them, the schlemiel was a figure of “impotent rage” that they believed had much to do with Exile (Diaspora).  It would fade away with the founding of a new state.  But as we have seen, the schlemiel remained in America; but what happened, in many cases, was that it more and more often started bearing the traces of Spleen.  The meaning of this agressivity has much to do with the power of art.

The American Schlemiel, seemingly, no longer embodies that sadness, that Melancholy, that Benjamin aspired to.  If anything, it has taken on Spleen.  It is full of rage and sarcasm.  Perhaps this has to do with the fact that entertainment has displaced art and the heroic artist has been defeated by the stand-up comic.

Perhaps the pre-historic has been displaced or perhaps the American schlemiel still hasn’t entered history.  Perhaps, as Benjamin feared, art cannot sustain the “endless catastrophe” of capitalism.  As a result, they only thing left for humor is “impotent rage.”

Is that what we see, so often, in Curb Your Enthusiasm?