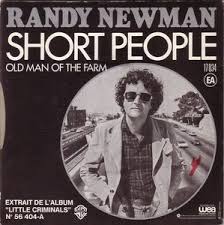 Words that touch the heart and sounds that make us tap our feet guide many Americans through life.  They give us hope to carry on.  This is especially the case in American religion and popular culture. Both bring liturgy and melody together in a way that it becomes one with experience and infuses it with a kind of magic that is, for lack of a better word, common.  Artists such as Ray Charles, Gladys Knight, and Ella Fitzgerald – to name only a few, there are many, many more – were able to bring gospel into the secular realm.   They smuggled it in and gave American music a spiritual charge and a sense of liberation that changed the direction of music not just in America but around the world.

I can personally attest to this.  Listening to their music I always felt a kind of non-denominational, popular spirit or what Harold Bloom might call an expression of “American religion.”   One of my favorite American composers – who always manages to evoke a popular spiritual message while retaining touches of melancholy – is Randy Newman.    His voice has echoes of Ray Charles and Van Morrison.  And his lyrics suggest something that every American can identify with since they touch on what makes Americans American – vis-à-vis individualism, simplicity, and the animal joys that come with having ample food to eat, a family, and a strong sense of security.

Randy Newman has been writing music since the early sixties for TV shows – such as the Carol Burnett Show, Sesame Street, the Muppet Show, and Saturday Night Live – and for major films such as Toy Story (1999) and Monsters INC (2001).  He has also written some wonderful songs – some of which were hits.  Many of these songs speak to something endearing and sweet that all Americans share.  But there are other songs that present more of an ambiguity (albeit with a sugar coating).

Of all the songs from my youth, the one that stuck most was Randy Newman’s “Short People.”  It stuck because I was astonished that a song could be so unabashedly cruel and loving at the same time.  Unlike a song by Bruce Springsteen or Michael Jackson, it presented a challenge each time I listened to it.  Dancing to the song wasn’t so easy.  I always recall the lyric that, “short people have no reason to live.”  How could the melody be so charming and cheerful? There was something about this song that showed me a part of America that was deeply familiar and unfamiliar to me.  I couldn’t figure out what it means, and that’s why it stayed with me.

Reflecting on the song, recently, I went on Youtube and gave it my full attention.  What is it all about? Was Newman singing a song at the expense of “short people”?

After listening to the song several times, I discovered that, as a kid, I chose to only listen to part of the tune.  I only heard the voice of a bully; I missed the chorus which turned the voice inside out.

Short people got no reason

Short people got no reason

Short people got no reason to live…

They got little hands

And they walk around

They got little noses

On their nasty little feet

The song is about the dialectic about a bully and the voice of conscience.   In the second part of the song we see that the singer realizes that the “short people have nobody to love” because so many people are hated so much.  He slowly realizes that short people are “just like you.” This comes out in the chorus.

Short people are just the same

As you and I

All men are brothers

Until the day they die

They got little baby legs

And they stand so low

You got to pick ’em up

They got little cars

They got little voices

They got grubby little fingers

They’re gonna get you every time

The message: Americans are all one: E Plurbus Unim.  The twist is that we may all be small people, but we have a hard time coming to terms with it. And this divides us.  There is always someone who thinks s/he is taller (in terms of money, power, identity, intelligence, education, etc) than someone else – and, to be sure, Newman tells us that “short people are just the same as you and I.”  We are all culpable, to some extent.  No American escapes unless they are, literally, small people:

Short people are just the same

As you and I

All men are brothers

Until the day they die

The message, restated: America is small people and I, the singer of this song who doesn’t want “small people down here,” admit that I am a fool and that small people are “the same as you and I.”   The “wonderful world” – as Disney would say – is a small world…after all.

Randy Newman’s genius is to sing a song that really hits on what makes us special as Americans.  We are divided and united not just by and through small people, but also, and perhaps more importantly, by a kind of sarcasm that transforms into empathy and love.  We are, as Newman suggests, a family.  And although any family will fight and make fun of each other, in the end, we are all a part of the same family.  And that realization – which comes through realizing I’m a fool – is translated into a joyful sense that the world is “wonderful.”  Through becoming small, wonder makes its debut.

His song “Sail Away” tells a different story.   He hits on the basic, simple common denominator at the beginning of the song.  “Here in America, we got food to eat.”  We live in a land of  plenty.

In America you’ll get food to eat

Won’t have to run through the jungle

And scuff up your feet

You’ll just sing about Jesus and drink wine all day

It’s great to be an American

Like in a Disney film, we are all happy animals.

Ain’t no lions or tigers

Just the sweet watermelon and the buckwheat cake

Ev’rybody is as happy as a man can be

Sail away with me

Our joy, however, because of the way he sings the song and his use of an American horn section, tells us that our satiety leads us to “sail away.”  In the most proud American sense, we are sailing through the Charleston (North Carolina) bay.  But we aren’t really sailing “across the ocean.”  Rather, there is a sense of home and homecoming.   This is our chorus.

We will cross the mighty ocean into Charleston Bay

We will cross the mighty ocean into Charleston Bay

But, as Newman notes, we come back to are American animal happiness.  We are as happy as a monkey in a monkey tree.

In America every man is free

To take care of his home and his family

You’re all gonna be an American

But there is trouble in paradise because our journey is really not from sea to sea but across the Charleston Bay. We can’t see it, however.  Because we are so blinded by being…at home and happy.

Our journey seems to be at end, suggests Newman.  Although he last musical line on the piano is a beautiful American March and suggests a redemptive theme, it is really suggesting that we Americans – in our ship of fools – are really going nowhere…just drifting and dreaming (“across the Charleston Bay”).  Sailing away may suggest that we are sailing away from the world and are deciding that it’s time to relax and be happy.

But in a recent video by Newman – released in September – he talks about how, in Europe, he experienced an anti-Americanism that really bothered him.  After saying this he shares a new song he wrote about what makes America special and different entitled “A Few Words in Defense of our Country.”

Newman talks about how America – in comparison to the rest of the world – isn’t so bad.  And that Americans shouldn’t cower down to these criticism and think of themselves as horrible people.

But, as the song goes on, while we learn about what Americans want from the rest of the world, we also hear what Newman thinks has befallen America:

We don’t want their love

Respect, at this point, is kinda outa the question

In times like these, we sure could use a friend.

Everyone thinks he’s so great

He went down to the Congo

You know what he left them with

You know a President once said,

“The only thing we have to fear is fear itself.”

Now it seems like we’re supposed to be afraid.

What are we supposed to be afraid of?

That’s what it used to mean.

The end of an Empire is messy at best

We’re drifting home of the Brave and land of the Free.

In other words, Newman is telling us, right now, that we are truly adrift at sea and that his America – the spiritual one – has drifted away and has lost its anchor in the Land of the Free.   Nonetheless, as he tells his little listeners in Toy Story, he’s not going away: “You got a friend in me.”  And that’s where it all begins and, if we’re lucky, this will bring the ship back from being adrift at Sea.  Short people have nobody to love….but that’s a challenge…not a statement of fact.  But here’s the rejoinder (which is, more or less, an assurance).  Let’s hope it has the last word: