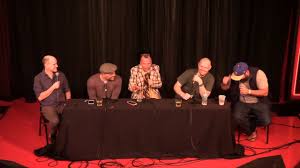 On election night, the Comedy Store hosted several comedians – such as Bill Burr, Russell Peters, Fat Jew, Morgan Murphy, and Sarah Tiana – who sat (in front of an LA audience) through the entire election night from the beginning to the very end.  The jokes they tell – to while away the four hours – represent a diversity of comedic perspectives that, since they are popular comedians, are expressed in such a way as to speak to large parts of the population.  Each of them – after all – have large audiences and taken together they entertain millions of people.      What is most fascinating is how – when the results come in from the election – their jokes start changing and things start becoming more serious.  But, in the end, they seem to be telling us that, since things are so crazy in the country, it’s better to just change the subject.

In the beginning of the evening, they play on the panic around how the evening will go. Doug Standhope reads fake texts by Joe Rogan about how he is worried about the evening but then…as he reads…the text changes and says something along the lines of “it doesn’t matter…at least I’ll smoke some joints, have some drinks, and tell some jokes.”  While they tell jokes about abortions and Trump putting an end to them if he gets elected, they joke about “the end of the world.”  But what’s worse than this, says one comedian, is the boring CNN coverage.   One comedian says it’s “an election that doesn’t matter” while another says “it’s not good.”  Joe Rogan – the organizer of the evening – takes note of how things are different now than they were: “When Obama went to school…here’s a guy who could form full sentences…we were happy with this guy who was intelligent and reasonable.”  This joke is displaced by things that have nothing to do with politics.  In fact, whenever anyone gets too deep, they displace it.   “If the President reflects your true life, you made poor choices.”  They discuss Donald Trump and Jon Stewart’s Twitter exchange.  They make fun of it while at the same time enjoying Trump’s comedic antics, which, as their routine shows, go in the face of political correctness in its appeal to raw emotion and stupidity.  This is best epitomized by Bill Burr (9min in) who portrays Trump in the middle of the night Tweeting while the people around him telling to stop: “I’ll grab him (Stewart) by the pussy.”  This prompts a lot of laughs from the audience.

Joe Rogan tries to sober the audience by saying that “if he gets in there” he’s going to “talk shit” in the White House.   “It’s going to get really fucking weird…it shows you how fragile this group is…this group we call America. We’re about to elect a douchebag.”  Fat Jew interjects: “The upside is that we will see an assassination.” This produces some laughter and some confusion – Burr tries to hush it a little while laughing – but the comedians manage to distract the comment by looking at Burr’s iPad screen and the election results.

An even more interesting moment happens after Russell Peters comes in and it becomes more obvious that Trump is winning.  Burr defends Scott Baio while Morgan Murphy tries to explain why Trump may win based on racism, sexism, etc (see 3:05).  She mentions anti-Semitism as a factor but then Fat Jew says, no, it has to do with “returning to the 50s.”   Morgan gets upset when other comedians try to shut her down and insists on explaining things.  But this brings up more issues.  To remedy things, some of the comedians get in some sexist jokes while praising her (so as to slip past political correctness).   Murphy retorts by making fun of the age of one of the comedians – who took a barb at her – Doug Standhope.  She continues talking about racism.

At the end of the evening – when it is almost final – Joe Rogan says “it’s really interesting…what the fuck have we got ourselves into?”  This spins into cynicism about politics in general.  Fat Jew adds “let Sara get her opinions (about abortion) in while she can…once Trump becomes President. they’ll zip that shut.”  Burr then (3:37) argues that there is a geographical issue here.  He argues that Murphy – who resides in LA – lives in a bubble and doesn’t understand the rest of America (during the evening, it should be noted, Burr says that he didn’t vote Trump – in fact, no one says they did).  Burr says the polls are garbage.  Fat Jew says agrees and says that people don’t want to say anything (about what they really feel) for fear of getting in an argument “around the water cooler.”

When they, apparently, get the word about Trump’s victory they sing: “It’s the end of the world as we know it.” But then they realize it’s not called.  Burr plays on the final results and then says “that a Reality TV star is now the leader of the most powerful country in the world….It looks like Trump kicked her ass.”  Looking at the audience, Rogan says, “You guys are disappointed. I can see that. Right?”  “I voted for Johnson,” says Rogan, “Hillary sucks.” Burr says, “Yes, indeed it (the world) is unraveling.” And then Rogen adds, rhetorically: “Doesn’t this reflect the world we are living in, collectively unraveling?”

But Burr – the most popular of this group of comedians – has the last word.  He starts talking about cars and TV shows in the nineties and everyone gets in there to tell jokes about this topic.  “This is America.  You start talking about cars.”  Humor can’t dwell on the new reality for too long, it seems.  It’s really not that funny.  Let’s talk about something else, something “we” Americans all like.

2 thoughts on “Election Night at the Comedy Store”