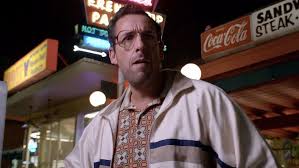 Without a doubt, Adam Sandler is one of the main four actors and screen writers who, over the last few decades, has popularized a new variety of the American schlemiel. That star-studded list includes Ben Stiller, Seth Rogen, and Judd Apatow who – in nearly every film – have starred (or casted actors) as schlemiels. They are – so to speak – the next generation of actors and filmmakers who followed the lead of Woody Allen whose film Annie Hall (1976) made the schlemiel into a national staple (arguably because this film, unlike the others, received a bevy of Oscars). One scholar – Daniel Itzkovitz – makes a fine distinction, however, and calls Sandler (and Stiller) a “new schlemiel” because he has displaced the schlemiel’s Jewish character and made it into an American everyman character. The same can be said for Seth Rogen and Judd Apatow.

While there are “new schlemiels” like Sandler, there is another new variety of schlemiel that casts a shade of darkness over this comic character. We find this by filmmakers like Noah Baumbach and the Coen brothers. The Coen Brothers films Serious Man (2009) and Inside Llewelyn Davis (2013) are a case in point. J. Hoberman has taken note and has argued that the latter film draws on the dark comedic schlemiel we find in Bruce Jay Friedman’s novel Stern. While Hoberman’s insight is important, it fails to take note of the implications for Adam Sandler, Ben Stiller, et al. The stakes are high. The only filmmaker who has a keen insight into what is at stake with this new (dark) depiction of the “new schlemiel” is Noah Baumbach. He has cast not only Ben Stiller – as in the films Greenberg (2010) or While We Are Young (2014) but also Sandler and Stiller in his Meyerowitz Stories (2017) as schlemiels who have more tragic and sad notes than comical ones. Film critics from The New Yorker – like Richard Brody and Ian Parker- are more interested in this darker shade because they find it more sophisticated and intelligent. However, Brody is clearly more in favor of the darker side when it comes to Gretta Gerwig playing – in Frances Ha (2012) or Mistress America (2015) – or casting the schlemiel, as in her recent film Ladybird (2018). For this reason, one need not be surprised by Richard Brody’s negative take on Adam Sandler’s recent Netflix film, Sandy Wexler (2018). I think that Brody’s reading missed the mark and is something of a red herring. What Sandler is recovering – of the schlemiel – in this film is noteworthy.

Brody’s reading of the Sandler film sees it as a poor imitation of Woody Allen’s Broadway Danny Rose (1984). For Brody, the master depiction of the “schlemiel talent manager” is mastered by Woody Allen.

The difference between the two is clear. It is not merely because Allen’s film came first. It is because -for Brody – Allen’s film is more intellectual and gritty. The comic failures of Allen’s depiction of the schlemiel manager are more sophisticated and meta. The mismatches are more profound.

What Brody doesn’t see in Sandler’s film is what Sandler’s new project portends about the schlemiel and his/her place in Hollywood, not New York. Broadway Danny Rose is a film that is more connected to the American schlemiel’s roots in New York and the Borsht Belt. For Baumbach (and for Brody, it seems), it has closer ties to New York than to Los Angeles and for that it should be commended. The new schlemiel that Itzkovitz is interested in, however, is to be found in Hollywood not New York. For this reason, Baumbach’s Meyerowitz Stories suggestion that we revisit the schlemiel – and in a darker shade – in New York is noteworthy. The only film that Baumbach cast stiller in – as a dark schlemiel in Los Angeles (albeit as a schlemiel traveling from NYC to Los Angeles) – was in Greenberg.

What is lost in all of this darkness and geography is what Stiller is looking to redeem in this character. Sandy Wexler is a charming schlemiel character whose honesty and humility are commendable. He manages – in this film – to help one of his talents by the name of Courtney Clarke (played by Jennifer Hudson) to become a star. He sees talent in people who Hollywood skips over. In other words, the schlemiel talent manager sometimes gets it right and this earns the love of Clarke in this film. But instead of hitching himself to a star, Wexler goes on to help the needy who are in search of stardom.

Jennifer Hudson – in an appearance on Good Morning America – takes note that what she loves about Sandler is the “family vibe” that he brought to the film. I would argue that this insight is important because the charm of his character is not simply the romantic element but the paternal and family element that Sandler brings to this schlemiel character. The schlemiel – as I have said elsewhere – draws its comedy on this family aspect. It is – like the schlimazel and the nudnik – a family member. To be sure, the classic American Jewish joke about the schlemiel situates him amidst a table with a schlimazel and a nudnik. All are hungry but it is the schlemiel that gets the soup.

Although Brody may not like this family element and find it to mainstream, the fact of the matter is that the charm of Shalom Aleichem’s characters – from which many American schlemiel derive their root – is based on the character’s being situated in a family and in relation to others. The schlemiel cares for others – think of I.B. Singer’s Gimpel – however, sometimes, on the way to helping others he or she stumbles and spills the soup. In Sandler’s film, Wexler’s eye for talent shows that while he cares for others he doesn’t always see things right about their talent. But with Jennifer Hudson’s character, he gets it right. Sometimes a broken clock is right one time a day.

This character gives us what Irving Howe once said of the schlemiel – light and sweetness. If we lose this character to the dark reflections on finitude by the Coen Brothers or Noah Baumbach or the criticism of Brody or Hoberman which looks primarily for the dark iterations of the character as noteworthy, we will lose something very special. Adam Sandler should be commended for this; strangely enough, it is Jennifer Hudson who got it right, not Richard Brody.