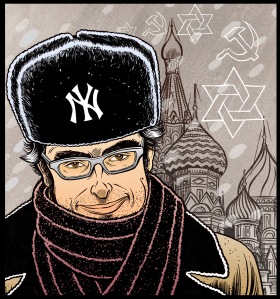 In Hebrew the word for circumcision is “brit.”  Brit is the same word used for “the covenant” between God and Man.   In fact, the first covenant between God and Man mentioned in the Torah is between Abraham and God.  When Abraham, at his late age in life, circumcises himself, God makes a covenant with him which becomes the foundation for all covenants in the Torah.  In fact, it is associated with the preservation of the Jewish people:

Like Abraham, Gary Steyngart’s main character Misha (from his second novel, Absurdistan) is also circumcised at a late age.  But while Abraham would refer back to his circumcision as the site of his greatest promise and the greatest joy, Misha looks at it as the source of his greatest suffering.  It is not his entry into the covenant so much as the sign of his mutilated masculinity (which really isn’t mutilated), his father’s mad obsession with Judaism, his hatred of Hasidim, and his membership in “pre-historic” tradition that he literally finds primitive in contrast to his more modern “multicultural” experiences.

Misha likens his circumcision to a wounded penis.  Although he fulfilled his father’s request by having a circumcision, he is very resentful. But instead of aiming this resentment at his father, he levels it on Hasidim and on Jewishness.  When he negatively describes his penis, his Jewishness is also being trashed.  It’s a world he would like to leave behind.  He’s more interested in living in New York with Rouenna, his Black-Latino lover who left him for someone else.  His love for her and New York is greater than his love of Judaism because, quite simply, he finds little to love in it (besides his father’s love for it).  The source of this problem, I am arguing, is his circumcision.

However, in an interview with Phawker.com Gary Shteyngart, when asked “Why did you decide to use the really kind of horrifying circumcision scene?” says that its not his circumcision that is the problem: it was Misha’s relationship with his father.  Misha’s father – and his “demand” that he be circumcises – is a part of what he calls his “awful” “ethnic circumstances”

The book does take a kind of skeptical attitude towards religion, Judaism, Christianity and even Islam sometimes comes in. The idea of the father wants this; the son doesn’t want this. This is the father imposing his will on the son and the results are not good. In some ways, it’s more about the relationship between the father and the son than it is about the actual act. In the scene leading up to it, is a long discussion between the father and the son about why he has to do this. In a way, a lot of the characters in this book are trapped in ethnic and religious circumstances that they didn’t call for. What’s so interesting about going around the world is that people are just trapped in these awful circumstances.

However, his relationship to these “awful” circumstances not only informs his father’s insistence on Jewishness; it also influences his negative description of the circumcision and, more importantly, his belief that he became a “holy fool” (a schlemiel) as a result of his first American experience of forced circumcision.  In other words, he had “been had” (as he says in the prologue) because he loves “too much” AND because of his “awful circumstances.”  And this makes him the holy-fool-who-agreed-to-a-circumcision.

In the second section chapter entitled “Dedications,” Misha likens himself to Prince Myshkin from Dostoevsky’s The Idiot:

Like the prince, I am something of a holy fool.  I am an innocent surrounded by schemers. I am a puppy deposited it a den of wolves…Like Prince Myshkin I am not perfect. (15)

However, when he looks more deeply into “how” he became such a holy fool, we readers learn that this cause and the life are so entirely different from Prince Myskin since Prince Myshkin wasn’t circumcized at a late age.  And while Prince Myshkin is a “holy fool,” Misha is something else:

How did I become such a holy fool? The answer lies rooted in my first American experience. (15)

His first American experience was the circumcision.  And this experience was set up by his father: he decided, in 1990, that: “his only child should study to become a normal prosperous American at Accidental College.” But before he went to the college, he would first have to get circumcised.

The description of what prefaced this decision is troubling.  And this casts a curious shadow over the circumcision.   Misha notes how, after his mother had died, he and his father were living together in a “tight, humid apartment in Lenningrad’s southern suburbs.”  And both were becoming something “other” : “neither of us could understand what the other was becoming.”

“Mishka,” my papa said, “you’ll soon be in America, studying interesting subjects, sleeping with local Jewish girls, and enjoying the life of the young”(16).

After sharing a few deep moments with each other, the father asks that Misha do one thing for him.  Misha thinks he means losing weight, but it is something else, something more Jewish:

These last words have the ring of anger to them.  And they imply that his father doesn’t want his son to assimilate.  He wants his son to always think of himself as a Jew.  And to guarantee this, he gives him the “other reason” why “you’re going to America”(17):

“Once you land in New York, go to this address. Some Hasids will meet you there, and they will circumcise you”(17).

At this point, Misha flies into horrific reflections on what will happen to his penis (Khui).  In his mind, he had now developed a big penis and would no longer be picked on by his classmates who considered him a Jew-with-a-small-penis:

The pain was clouding my eyes, the pain of having the best part of me touched and handled and peeled like an orange.  Since becoming gigantic, I had gotten used to a kind of physical inviolability….No one dared touch me now.  Or wanted to touch me, for that matter.  “I’m eighteen years old,” I said.  “My khui will hurt terribly if they cut it now.  And I like my foreskin.  It flaps”(18).

But in the end, he bends to his father’s greatest desire for him.  He realizes that his father is no longer ashamed of being a Jew: he is a Baal Teshuva of sorts.  And Misha’s penis is the sacrifice, so to speak.

At the time, he forgets his terror because his love for his father is too great.  This love is wrapped up in several physical aspects of his father:

Some wags say that men spend their entire lives trying to return to their mother’s womb, but I am not one of those men.  The trickle of Papa’s deep vodka breath against my neck, the hairy obstinate arms pressing me into his carpet-thick chest, the animal smells of survival and decay – this is my womb.  (18)

In other words, when he is near his father he becomes like a child.   And this is what makes him a holy fool of sorts (almost like Abraham). The only question in his mind is “what is a Hasid?”

They are the one’s his father is giving his son over to; they are the gatekeepers of America.  Before Misha can experience America, he must have a Jewish experience: circumcision.  As I will show in the next blog, this is the experience that he must overcome if he is to be his own person.   Unlike Abraham, the circumcision is something he only does for his father and will be something he would rather leave behind.  It brings him more shame than good.   This revised – fictional -reading of circumcision is what I call “circumscription.”