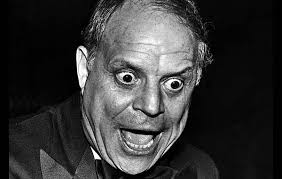 Don Rickles was the master of insult comedy.  But what was coupled with that insult was a kind of anxiety that turned a new page for Jewish American comedy.  It showed another side of being a Jew in America.   It registered a different stance of American Jews toward the America, one that was less self-deprecating and more assertive.  Lawrence Epstein, in his book The Haunted Smile, points out that it is a “rare performer who can make it insult comedy”(162).  And, for Lawrence, there were only three great Jewish comedians who fit that bill: “Fat Jack Leonard,” Don Rickles, and Rodney Dangerfield.   Dangerfield was, like Rickles, full of insults and incredibly anxious.  But while Dangerfield “turned his anxieties inward, Don Rickels turned them outward, attacking those who caused him grief, pushing into the territory of insult humor explored earlier by Fat Jack Leonard”(223).

While “Rodney Dangerfield was the American Jewish psyche blaming itself for its troubles, Rickles was the American Jewish people blaming everyone else.  He was the Jewish hostility to anti-Semitism finally allowed to speak and doing so with a barely controlled anger and a barking outrage”(223).   Instead of talking to his audience, like most stand-up comedians do, “Rickles changed the nature of the dialogue.  He was working in strip joints, and the tough audience liked it when he began to yell at them.”   Rickles didn’t hold back from insulting everyone.  No matter how great the stars were, he insulted them.  Here he is insulting Frank Sinatra on The Johnny Carson Show (1:30 seconds in).

But the kind of insult that rose Rickles to fame, according to Epstein, was his ethnic humor and his personal insults.   No ethnicity was free of being insulted.

Rickles got away with these kinds of jokes, according to Epstein, because his audience “knew he was kidding and meant no harm, the words themselves cut deeply”(224).   This was unique because “most Jewish comedians would not follow Rickles footsteps.” They prefer, instead, being “neurotics, satirists, or observers”(224).  Only Richard Belzer, argues Epstein, tried to take on Rickles’ legacy. But, argues Epstein, he failed and his ethnic jokes came across as offensive.

Phil Berger, in his book The Last Laugh, points out that Don, unlike many other stand-up comics, did incredibly well on TV (167).  While “TV-minded comics took no chances,” Rickles did.  Rickles gave rage and insult a public forum on TV.  He touched an American nerve while, at the same time, showing a new kind of Jewishness that was brash and fun, a kind of Jewishness that looked back at the person instead of looking away.  He showed that self-deprecation and neurosis were not the only Jewish comic mode.  He showed us that the comedian should not just be fearless when it comes to taboo words and ideas, she must also be fearless when it comes to facing the other with a sense of humor.

We need this today, especially, in a world that has been inundated with politically correct ways of speaking and acting.  Rickles taught us that we need to look this in the face and insult it – yet, in such way that we can all laugh at how we “look” or show ourselves in the world.   His way of deflating the ego – whether it was the ego of Frank Sinatra, Johnny Carson, or an audience member – though insulting, was always humbling.

Don Rickles passing will be felt by many.  His insults raised the bar for American comedy and touched on something profoundly American.  He was able to take ethnic comedy and insult comedy and give it a human face.  He taught us that American comedy should always aim at the face, yet, in such a way as to break it open and expose how ridiculous it is that we “pass” ourselves off the way we do in the world.  The anxiety that comes with passing is a distinctly American anxiety, and it is certainly a Jewish American one.

But when Jews are kvetching together, passing can be laid aside.  To be sure, there is something distinctly Jewish about his kvetching and complaining.  One can see this when he is kvetching with Larry King.   But this kvetching is comedic; it’s not mean-spirited.  The anxiety that exists between these two famous Jews is a familiar one.   The insults are delightful.   I’ll end on that note because, for Jews, kvetching makes life, and all its ridiculousness, easier.  There’s always something to complain about in this world.  But to look it in the face, to look you in the face and say, “you look ridiculous,” is something else.  Rest in Peace, Don.