A friend of mine from Pittsburgh is a part of a Jewish artist’s collective called the “Hasidic Arts Collective.”  And their comic baby is called Shimdeo.  (The subtitle of the website – which is the portal to the wild-and-wacky Shmideo world gives away it’s target audience: “Awesome Stuff for Awesome Jews”).   My friend’s name is Sruly Brooker.  He is an animator, a family man, and a religious Jew (a CHABAD Lubavitcher).

I met Sruly by way of association; namely, through a good friend of mine I went to seminary in Israel with named Raphy and another friend who made the film on me called Shlemiel – the director Chad Derrick.  To be sure, I met Srurly face-to-face in Pittsburgh not-that-long-ago.  After first meeting, we spent a lot of time together.  And we hit it off immediately.  When I found out that he had heard about my “schlemiel project” (which was documented in part by Chad Derrick), I told him more of my story.  (Some of the stuff that didn’t make it into the film.)  And he told me his story.  Sruli shared with me his first love, which carried with him from Austin, Texas (where he went to University): animation and theater.

During our conversation about animation, comedy, and our paths to religion (I’m a baal Teshuva through Lubavitch), we realized that we both love the schlemiel.  And we have created art that looked to channel this wonderful character.  Sruli proceeded to tell me about his “Shmideo” project; while doing this he showed me his first animation (before Shimdeo.com had even gone up).  I was so happy to see what he had done with the schlemiel.  And I was reminded of this today when he posted his second animation entitled “Supernatural”:

This animation belongs to a series entitled “Shais Time.”  The Shais of “Shais Time” is Rabbi Shais Taub.  He has been written up in the New York Times which says that Shais:

Has been teaching and writing about the spiritual component of recovery from addiction. He had begun within the Jewish community, specifically the Chabad movement, and yet providence or serendipity or destiny has brought him increasing recognition and influence well beyond it.

Taub’s first book is entitled God of Our Understanding: Jewish Spirituality and Recovery from Addiction.  As one can imagine from the title, the work has a unique claim of relating Judaism to “recovery from addiction.”  And it deals with this claim in very kind, witty, and fun ways.  It aims to be practical, funny, and inspiring.

Sruli’s animations illustrate Taub’s talks on different topics.  In this animation, the topic is the “miracle of Hannukah.”  It begins with a discussion of what a miracle is and ends with a description of the miracle in a simple, straight to the point, witty manner (all of this in less than one minute).  Most importantly, for the purposes of the animation, is the Rabbi’s timing.

As they say in Showbiz, it’s all in the timing.

Sruly comes to the Rabbi’s aid by way of creating a schlemiel-character named “Dweeb.” Dweeb’s comic movements and odd situations are determined by the things the Rabbi says.  What I like most about this is how Sruli has Dweeb journey into outer space where he lights a retro-eighties-video game menorah.  He – like the Miracle – becomes “supernatural” (instead of being drawn by gravity, he is lifted up into outer space where he lights the miraculous video-game-menorah).  The take away: even though “Dweeb” seems to be in some tight situations and even though he bounces around (as some of the frames illustrate very well) he gets to light the menorah and win the video game! (Lights, sounds, and gestures – that is, batteries – included!)

What I love about “Dweeb” is that he, like many a schlemiel, is on a journey through time and space: schlemiels – in a quixotic sense – like to travel.  And Dweeb, like a many a schlemiel, is positive about the journey: in his simplicity, he simply bounces around.  But here we have an added dimension: the narrator of this tale – who sends him bouncing around – is a Rabbi who is speaking about miracles and Biblical commandments.  And although he speech bounces Dweeb around, ultimately, that same speech is what guides “Dweeb” to a good end.

To be sure, this is what makes his adventure novel and unlike much Yiddish literature.

To begin with, this is a production made my Hasidic Jews (Baal Teshuva).  This contrasts to the creators of Yiddish literature who were often people who grew up Hasidic (observing Torah passionately) but became Maskilim (members of the Haskalah). But what both of these groups – religious or not – focus on is the journey of trusting individuals.

Indeed, one of the things I love about the schlemiel in Yiddish literature is that it is often the case that the original schlemiel character – much like the creation of Cervantes called Don Quixote – seems to just move around from place to place in a trusting manner.  But, regardless of where the schlemiel goes and what he experiences by way of bad luck, the schlemiel still seem to be happy.

We see such a schlemiel in the Yiddish classic The Travels and Adventures of Benjamin the III by Mendel Mocher Sforim (which was written in 1864 in Yiddish and first published in 1885).  And although, in the author’s mind, they were foolish to ever believe they could leave the “Pale of Settlement” – in their journey – ultimately, this foolishness showed how, in exile, at the very least, the comic-imagination gave some sense of hope. 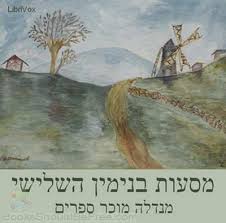 Benjamin – the main character of the novel – is on a foolish journey.  He thinks he will leave the Pale.  When Benjamin – who is based on the character from a “real” travelogue (Benjamin of Tudela), which he parodies – approaches a man named Senderl, to come with him on a journey, we are introduced to a comical-dynamic between them that will accompany the two on their journey:

Ha! Perhaps you really should come along with me, Senderl?  Here’s your chance, the chance of a lifetime, foolish one.  I intend to go there anyway – and two would be company.  And if by some stroke of luck I should become king, I’d make you my right hand man.  Shake hands on it!  Come along, Senderl.  God willing you won’t regret it.”

It seems Benjamin has met his schlemiel-match in Senderl.   Like many a fool, Senderl  gives no thought to his answer.  He’s ready to go.   Like Benjamin, he shares the dream:

“Well, if you will things that way,” Senderl said, falling in with the plan, “So be it!”

At that moment, Benjamin leaps up to hug him. And he exclaims: “You’re all right! Let me hug you!”  Benjamin, the narrator tells us, “went into raptures.”

I’d say that “Dweeb”- like Benjamin and Sendrl – is on a Quixotic journey. But that journey is guided by the kind and witty voice of Rabbi Taub and is made possible by the illustrations of Sruli Brooker.  This journey is similar in some ways, different in others.

The main difference is that “Dweeb” is bouncing around from situation to situation (based on what is being described); but he is ultimately bouncing toward another Mitzvah (commandment) not back to the Pale of Settlement.  He ends up lighting what looks to be a video game menorah, while Benjamin and Sendrl get to share a tale of their adventure to the Shtetl.

Although Dweeb may lose from time to time: by being tossed aimlessly by the sea, being thrown into closed spaces, and being bounced around, he wins by way of faith.  In contrast, Sendrl and Benjamin may lose by way of reality but they both win an ironic, imaginary victory.  They get to tell the comic tale and they manage to save the best element if man through comedy: trust. This is the secular antidote to a troubling situation.  (Note that their work was first published after a few major waves of Pogrom’s on the Pale of Settlement.)

And that is the takeaway: Dweeb is still a schlemiel: no matter what Mitzvah he ends up doing – by virtue of the Rabbi’s staccato explanations – he will still be comically be bounced around reality.  That’s one way to look at it; another way of looking at this is that the Mitzvah of lighting the Menorah (celebrating the “miracle”) is what is at the end of the road.  And this redeems it all.

But – then again – its just the miracle of comedy and animation: that Dweeb just keeps on going on.  Perhaps this is what makes Dweeb – like many animations -“supernatural.”

This is the kind of argument you would get if you were to put Shmideo and Mendel Mocher Sforim in the same room.  One reading of the schlemiel’s journey is secular, the other Hassidic.  Regardless, both of them would agree that the Jews need an ironic ending to make light of this long, long journey through Exile (“golus”).

Way to go Sruli!  Dweeb is on the “Jewdar” of Schlemielintheory.com!

Don’t slip on your way out! And Happy Hannukah!