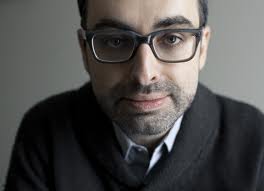 Sometimes schlemiels can go through transformations in the self-same novel, movie, short-story, or comic strip.  We see this, for instance, in several Woody Allen films such as Anything Else (2003), Hollywood Ending (2002), Whatever Works (2009) and Midnight in Paris (2011); we also see this in Judd Apatow’s films Knocked Up (2007) and Super Bad (2007).  However, sometimes a schlemiel may seem to go through a transformation.  In such a scenario, this or that trait of the schlemiel may remain buried only to resurface as a tic, habit, gesture, or memory.   We see this with the main character of Gary Shteyngart’s The Russian Debutante’s Handbook.   The schlemiel who goes through something of a transformation is Vladmir Girshkin, the main character.  But this transition – what I, playing on Shteyngart, call a “curious arc” –  is riddled with remnants of his old-schlemiel-self which bubble up to the surface.

I have written a few blog entries on Gary Shteyngart’s The Russian Debutante’s Handbook.  In these blog entries, I read Vladmir as the “immigrant-becoming-American schlemiel,” as a partner in a comic duo with another character called Rybakov, and as the son of a Jewish mother.    All of these entries address the question as to why we readers might call Vladmir a schlemiel.  But there are a few other instances I’d like to include before showing how Vladmir moves from being a schlemiel to a schemer of sorts.

Already in the novel, one can see that Vladmir is not a typical schlemiel in the sense that he is very successful with women.  He leaves his Jewish girlfriend “Challah” (as in the bread Jews eat on the Sabbath) for a “high-class” gentile named Fran.  She goes to Columbia University, loves things Russian (read exotic), is a hipster, lives the easy life of a New Yorker who has money to spend on “organic toothbrushes” and vegan cuisine, and has parents who are both professors at CUNY.  Her life is easy and when Vladmir enters it he sees an American life he was never familiar with.  In this, to be sure, we see something of a foreshadowing of his transition in his “upward mobility.”  But this movement is fraught with elements of schlemiel-keit.

To begin with, the group of individuals that Fran hangs out with – as well as her parents – are living in a dream bubble of affluence.  Her father has embarked on a “humor studies” project (we see, after his transformation, that Vladmir finds this to be ridiculous), her mother (unlike his) lives a life that has no economic worries whatsoever, and Fran’s friends have leisure time to spend lots of money on food, drinks, and travel. They also have a taste for Russian things, and, for them, Vladmir is the “real thing.”

Vladmir soaks all of this in and feels as if he has “made it.”  But this is an illusion.  Although he moves in with Fran’s family and doesn’t have to pay for room and board, he still works in the Emma Lazurus Society Immigrant Absorption Agency.  And, more importantly, he runs up a huge bill on his credit card because he takes his new found friends for food and drinks on a daily basis.

When he wakes up to this economic crisis, he scrambles to figure out how he can get money so as to pay off his bills and maintain the image of affluence.  This prompts him to do two things that – unbeknownst to him – will lead to his transition from a schlemiel to a schemer of sorts.

First of all, he contacts Rybakov (“the fan man”) who, earlier in the novel, is shown to be a criminal with a sense of humor. And, as I pointed out in one of my blog posts on the novel, Rybakov wants to become an American citizen and has already made offers to bribe Vladmir for it.  Although Vladmir remembers his parents’ admonitions to stay away from criminals, he caves in as a result of his economic crisis.  Vladmir proceeds to call Rybakov and accepts an invitation to join him on a boat ride (on the SS Breshnev) through the harbor.

On the trip, he meets Rybakov’s Serbian bodyguard, Vladko, who carries guns and is dead serious about everything:

A hatch opened, and from the lower deck there emerged, a preternaturally tall, round chested, pink-eyed, near-naked young man, as substantial as anything Serbian myth ever produced. (114)

Together, they travel through the harbor and meet up with a boat of international criminals.  Before they meet up, the narrator reflects on how Vladmir’s American dreams have changed over time:

This “curious arc” leads him into trouble and it sends him out of his schlemiel-dreams into harsh reality.   Before meeting up with a sketchy group of criminals in the harbor (a meeting arranged by Rybakov), Vladmir starts feeling his “fear gland” kick in.  (He starts realizing, for the first time, that fear and money go together.)  Not knowing what is ahead of him, he is besides-himself when he hears Vladko ask, indifferently, “What gun do I bring?”

Although Rybakov couches everything in comedy, the fact of the matter is that the undercurrent of his comedy is fear.  And this hits Vladmir who “pretends to play along.”  When he meets the criminals, one of things we notice (as we also see with Vladko) is that their bodies, in contrast to Vladmir’s schlemiel-ish body (his mother says he has hips and walks like a Jew, etc), are intimidating (119).  This contrast, I believe, outlines a distinction which is at the forefront of the novel; namely between the more feminine schlemiel character that Vladmir plays, and the more aggressive male character played by these criminals and others.  Vladmir, as the novel goes on, becomes more masculine.

These criminals give Vladmir a gift from Rybakov’s son “Groudhog”:  “fifty cartons of Dunhill cigarettes” and a “Rolex watch.”   After receiving this gift (which has strings attached; strings that Vladmir doesn’t see), he calculates how much money he can get from all these stolen goods in hope that he can pay off his credit card and the rent money he owes to his previous girlfriend, Challah.  The narrator articulates Vladmir’s naivite:

Bravo! Yes, Vladmir was ready to learn from these people. Maybe he could even introduce them to Fran.  He did a little bow again.  How can I repay your kindness? Indeed.  (121)

Following this, Rybakov has all of the criminals say their “favorite” things about Rybakov.  What ensues is comical, but, as I noted above, it’s undercurrent is fear.  But Vladmir doesn’t get it:  “He had been delighted to just listen to them”(124).

Following this, Vladmir goes back to work and learns that Rybakov has been awarded citizenship.  Inspired by this winning streak, Vladmir starts to dream about getting more money.  He ends up calling his friend Baobab and, knowing that Baobab has his ways of getting money, asks him for a favor.  (Baobab, it must be noted is also a schlemiel; he is the “odd one out” who dresses oddly, follows obscure bands, and often fails with women.)   Baobab tells Valadmir that he has enrolled at CUNY to learn Humor studies with Fran’s father.  Vladmir notes he isn’t funny, but Baobab retorts:

As we can see from his retort, Baobab doesn’t know that he’s being a schlemiel: he misunderstands the Marx Brothers while truly thinking he is “sticking with reality” vis-à-vis his new career choice.   Regardless, Baobab gives Vladmir a tip which, when followed up, transforms Vladmir from a schlemiel into a schemer and sends him from America to post-Communist Eastern Europe.

I will continue this blog-entry in tomorrow’s blog….