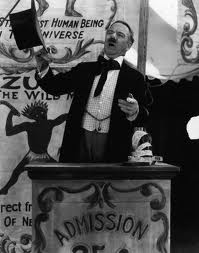 As a Jew, I can assure you that Jews love to talk.  In their work on the schlemiel, Ruth Wisse and Sidrah DeKoven Ezrahi see the schlemiel’s speech as a kind of “substitute” sovereignty.   Ezrahi tells us that before Israel, speech, not action, was the best defense.  And for centuries there was a historical principle at work: in the world, Jews lose; but in the world of speech, they win. For this reason, the schlemiel is, for Wisse, the “modern hero.” He is the modern hero who wins a comic victory.

But, to be sure, any fool can see that this victory is incomplete.  We all know that it is not real.  We are all reminded, by way of the schlemiel’s act of substitution, that the world is unkind.  But rather than suffer quietly and tragically, Jews speak.  And they speak (or have spoken) comically.

Listening in to the conversation of schlemiels, we can (as John Felstiner suggests with “Conversation in the Mountains”) hear the shrug.  We can also hear a voice that wants to figure things out by way of indirection: whether by text, a relation, an event, etc.  This act of (or rather attempt at) comprehension is where schlemiel comedy starts.  If that comically intent voice is shared with another schlemiel, we can see the comic ordeal that the schlemiel must go though in order to get anything (even the simplest tasks) done.

As we see with The Three Stooges, its easy for a schlemiel to talk of and promise things.  But, for the schlemiel, it seems, it’s hard to do anything :

But schlemiels do more than just fail at figuring out how to do this or that thing.  Isn’t the schlemiel keying us into the comic relationship that is created by way of conversation?  As Kafka notes in “Excursion in the Mountains,” the freest conversations happen when the “wind blows” between schlemiels.  For Kafka, this wind blowing is conversation; it is what Felstiner calls “babbling.”   But with Celan and Kafka, this babbling has a relationship that is, literally, going in some direction.

This is what Paul Celan teaches in his “Conversation in the Mountains” by way of a Jew named Klein (little):

So he went off, you could hear it, went off one evening when various things had set, went under clouds, went in the shadow, his own and not his own – because the Jew, you know, what does he have that is really his own, that is not borrowed, taken and not returned. (17)

But where is this Klein-the-schlemiel taking us? And why do we have to know where he is or where he is going?  To be sure, he’s looking to meet up with his friend, Gross (Big).  And both of them are looking for a conversation.  They’re going toward each other and, once they find each other, they move on toward something “wholly other.”

In “Conversation in the Mountains,” Paul Celan teaches us that the schlemiel is not simply involved in a “substitute sovereigny”; rather, he is always orienting him or herself with a place where he or she is or where he or she may be going.   And this orientation and speech are repetitive in their address to the other.  Paul Celan conveys this in his “Meridian Speech” by saying, over and over again, the words: “Ladies and Gentleman.”

Celan proposes a kind of comic, repetitive movement that addresses the other.  And, since this is a movement that is never final, it must be replayed in a schlemiel-like fashion.

Each movement is an address.

It’s another way of saying: “Hello, I’m here! Where are you? I’m waiting for you to come.”  The comic effect is in the fact that we are asked where we are when we are already there before the schlemiel.  But this is a serious matter in the sense that this repetitive address suggests that the other is being called on to hear, and be here, once again.

These are the words of Celan’s Klein to Gross and these are words that he speaks to his audience in “Conversation in the Mountains.”  These words not a “substitute sovereignty” so much as a spur to comically relate Klein to Gross and me to you.  Comedy’s main mode, Celan seems to be telling us, is relational

Each comic address is meant for a rejoinder, a response, in which we come to speak.  Strangely enough, it is the voice of a schlemiel named Klein that calls us to join him/her to speak – on this comical journey toward the other.

Ladies and Gentleman: This should serve as a preface….