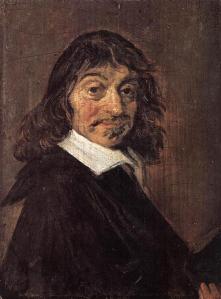 Frans Hals was a Dutch painter from the 17th century.  Many art historians group him together with the school of Mannerism, which developed in the Italian Renaissance of the 16th century.  Hals was a part of what is called the “Northern Renaissance.”  Some mannerist works of art are not simply realistic; many of them are symbolic and allegorical.    And, as many art historians note, Mannerism was transformed into Baroque art.  One of the elements that remains in this transformation is the allegorical.

Hals’s work is often Realistic, but it often errs on the side of the allegorical.  This allegorical dimension, however, is subtle.  It’s not obvious.  In fact, Hals work demands the viewer to pay close attention to subtle gestures, gazes, and movements within the frame (which oftentimes gesture to something hidden and obscure outside of the frame).  The allusions they make suggest multiple meanings.

Hals is well known for his portraits of doctors, aristocrats, and leaders, but he is less known for his portraits of children, fools, and musicians.  Going through many of these paintings, I found that Hals was more fascinated with the gestures of simple people than with aristocrats.  Their gestures are the most suggestive and allegorical; these representations suggest a way of seeing that is based on allusion and movement.

To illustrate the contrast between his representations of aristocrats and simple folk, I’d like to first take a look at his most famous portrait; namely, of Rene Descartes.  After doing this, I’d like to contrast this portrait to the portraits of a fool, a child, and a two child musicians.

In the portraits of many aristocrats and leaders, Hals portrays his subjects in the most serious ways.  Their gestures are simple, their bodies are rigid, and their gazes are focused.  They are in “possession of themselves.”  They are men whose bodies are subject to their reasoning and to civility.  Like those portraits, this portrait of Rene Descartes is of a man who is self-possessed.  The subject looks directly at the viewer with a knowing look. However, the most interesting aspect of this painting is Descartes mouth.  We are not sure if he is smiling or if he is indifferent.  This ambiguous gesture of the father of Modern Philosophy is rich in implication.  It suggests that he is friendly and a part of humanity; on the other hand, it suggests that he is indifferent to – and perhaps even fed up with – humanity.  Perhaps he would rather be thinking than sitting in front of Frans Hals.  After all, Descartes regarded the imagination as inferior to the intellect and associated it with the body and not the mind.

In contrast to this painting of Descartes, the gestural representations of fools, children, and children musicians are much more subtle and suggestive.  I will take a look at a few to bring out this contrast. 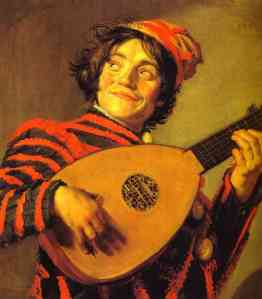 When I was looking for a photo to append to my blog post on Charles Baudelaire’s “A Heroic Death” (which pits a fool against the Prince), I chose Frans Hals painting which the Louvre website calls a “Buffoon With a Lute.”  I found that it nicely illustrated the allure of the fool (and his gambol with death) to which the narrator of the Baudelaire prose piece was drawn.

The Louvre, which owns this painting, estimates that it was made somewhere between 1623 and 1625.

I am struck by look and gesture of the Buffoon.  His head is tilted to the side and he is looking askance at something we can’t see.   His smile is also tilted.   To add to the contrasts, one will notice that his hair is longer on one side and shorter on the other.  The tilting of all these features complicates our reading of the Buffoon.  To be sure, its hard to tell whether he is happy or wary of what he is doing and who he is playing for.  I see this, specifically, in his smile.  The fact that it is pulled up on the edge suggests that something is odd.  In fact, I couldn’t help but sense that in the midst of his apparent joy there may be a feeling of terror.  It seems as if the Buffoon is about to be killed or punished; but to mitigate the threat, he plays on and smiles toward the person (or people) outside the frame.   He is tactful.

This gesture is complicated by the fact that this is not simply an absent-minded fool who lacks any sense of the world outside of him.  He is innocent, a boy, and yet, he is a man facing something we can’t see, something outside the frame.  His smile is cunning and responds to something real; unlike Descartes smile which seems to detest the real or only to deal with it as a matter of course.   Since it deals with possible terror and is riddled with anxiety, this painting is more existential than the Descartes portrait, which is more about an intellectual attitude toward the world.

The buffoon’s face connotes subtlety, but his hands and the instrument connote neutrality.  They are –so to speak – doing their own thing.  It is as if his body, in a Cartesian sense, is on auto-pilot while his soul is caught between fear and joy. 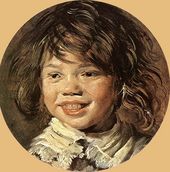 In this portrait of a child, the child is smiling, happy, and innocent.  He is present to the painter.  Unlike the portraits of Descartes and the Buffoon, the child is not judging the world or dealing with it in a tactful manner. 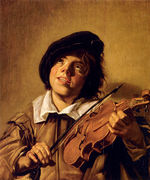 In contrast to this portrait is the painting of a “child playing the violin.”  In this portrait, the subject is not present to the painter or viewer.   He is absent-minded.  His head is tilted, but his eyes look heavenward as he plays the violin.  This contrasts greatly to the Buffoon whose eyes look to the side and smile is twisted.  It also contrasts to the Descartes portrait since he, at the very least, is giving some attention to the painter (though perhaps against his ‘real’ interests).

This portrait is haunting in the sense that it seems as if he is about to put down the fiddle and ascend to heaven.  The music, perhaps, is detaching him from the world.  Perhaps he, unlike the Bufoon with the Lute, is the true fool.  His gestures denote a total disregard for the eye looking upon him.  Perhaps he is truly free of the gaze and the world. 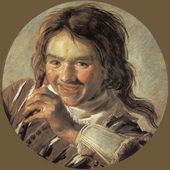 In this painting, the musician has stopped playing.  He looks directly at you.   There is something odd about this gaze.  It acknowledges the gaze but responds to it in a way that is awkward.  Its as if he has missed a social cue or two.  Moreover, the flute he holds interrupts his smile.  And this creates a kind of confusion in the viewer.   To be sure, his smile is not perfect.  It, too, is a bit askance.  And the fact that he is a child doesn’t mitigate the sense of madness that this portrait conveys by way of subtle gestures.

What interests me most in these portraits is how Hals articulates the subtlety of gesture and its relationship to the world.  As we have seen, from Descartes to the boy with the flute, Hals was interested in the different ways his subjects regarded the world.  The difference between the Philosopher and the Bufoon, the child, and child musicians is telling.  The question I have is what value do these gestures have for Hals.  Did he have more respect for his aristocratic subjects or for his folkish and childish subjects?  Did he value the theoretical bearing of Descartes more than the tactical bearing of the Bufoon or vice-versa?

These questions are relevant since I will be looking into the meaning of gesture in Walter Benjamin in forthcoming blog entries.  For a painter like Hals and for a thinker like Benjamin, the gesture and its performance tell us a lot of things about the nature of what it means to have a relationship with the world.  Benjamin, in his readings of Kafka, was interested in characters who (as schlemiels) had an odd relationship with the world.   He focused on their gestures so as to convey (or even teach) this attentiveness to his readers.  Like Hals, Benjamin does not evaluate these gestures so much as pay attention to them so as to understand their relationality.

So, to be sure, I’d like you to consider this blog entry a ‘warm up’ to the reading of gesture that I will be pursuing in the near future.