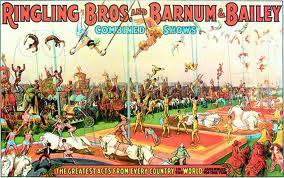 As I noted in the last blog entry, Ernst Bloch believed that “the circus is the only honest, down-to-earth honest performance.  A wall cannot be built anywhere in front of spectators who sit in a circle and surround performers.  Nevertheless, there is an estrangement” (179).

The confluences between Bloch and Walter Benjamin, in this claim and in these descriptions, are fascinating.  To be sure, Benjamin was also interested in the circus.  He also thought that although the circus was honest and utopian, it was fraught with estrangement.

We see the circus, utopia, and estrangement breached in Benjamin’s Kafka essay; namely, in the final section of the essay (which was published posthumously) entitled “Sancho Panza.”  In this section, Benjamin addresses the circus by way of the “Natural Theater of Oklahoma” that we see in Kafka’s novel Amerika.

Before addressing the Natural Theater, Benjamin cites a few lines from a Kafka short story about the “strange” ways of Kafka’s students and scribes.  They are the carriers and transmitters of tradition to the next generation and he is astonished by them:

‘To him, hammering is real hammering and at the same time nothing, which would have made the hammering even bolder, more determined, more real, and, if you like, more insane.’

Benjamin comments on this line that:

This is the resolute, fanatical mien which students have when they study; it is the strangest mien imaginable. The scribes, the students, are out of breath; they fairly race along.  (137)

Benjamin describes the scribes and students “as out of breath.”  They “race along” to receive and deliver the message of the tradition.  Benjamin goes to Kafka for the details.  And what we learn, from Kafka’s descriptions is that the narrator is astonished by the people who receive tradition.  Instead of seeing someone like Moses, Kafka’s narrator sees a bunch of schlemiels jumping up and down to get the message of tradition.  It is “strange…almost incomprehensible!”:

Often the official dictates in such a low voice that the scribe cannot even hear it sitting down; then he has to jump up, catch the diction, quickly sit down again and write it down, then jump up again and so forth.  How strange that is!  It is almost incomprehensible!

Instead of explaining the meaning of tradition and this strangeness, Benjamin turns to the  Natural Theater of Oklahoma in Kafka’s Amerika:

It may be easier to understand this if one thinks of the actors in the Nature Theater.  Actors have to catch their cues in a flash, and they resemble those assiduous people in other ways as well.  Truly, for them, “hammering is real hammering and at the same time nothing” – provided that it is a part of their role.  They study the role, and only a bad actor would forget a word or movement. For the members of the Oklahoma troupe, however, the role is their earlier life; hence the “nature” in this Nature Theater. (137)

The nature of the nature theater is the earlier life of these characters.  The role they study is their tradition.  In other words, their earlier life is their tradition.  They inherit their childhood and learn it, play it.   In Bloch’s language, we could say that this is the “honest” element of the circus.  They play their earlier selves and they do so openly.  There is no curtain that stands between them and the audience.

Of them, Benjamin writes:

Its actors have been redeemed.

However, someone has not been redeemed and that is the student:

…whom Karl watches silently on this balcony as he reads his book, “turning the pages, occasionally looking something up in another book which he always snatched up quick as a flash, and frequently making notes in a notebook, which he always did with his face surprisingly close to the paper.”

The careful reader will understand what Benjamin is hinting at; namely, the fact that Karl is the student.  He is taking notes and “snatches” things up “in a flash.”  He is the unredeemed schlemiel who transmits the tradition.  Echoing the title of the section, he is Sancho Panza.

And perhaps this is what is most astonishing.  The fact that the schlemiel must spend his or her days recording and transmitting a tradition he or she doesn’t understand but only receives in flashes.  When it comes, he or she must “jump” up and snatch it as it flashes.

This is something the schlemiel must do as the schlemiel is not redeemed but these actors are.  By way of the Natural Theater of Oklahoma, Benjamin is saying something different than what Ernst Bloch says about the circus.  Although Bloch says there is an honesty and an estrangement to the circus that is unparalleled, he doesn’t explain why.  Benjamin does.

The honesty of Natural Theater, of the circus, is its nature.  It is the fact that it studies its earlier life and performs it.  This involvement is redemptive for the actors. However, those who carry on the tradition do not live this life.  It is they who are estranged.

Franz Kafka’s Karl Rossmann, who the Kafka scholar Heinz Politzer calls “infantile,” is a student; as is Sancho Panza and Walter Benjamin.  They are all students of tradition.  But in being students who transmit the tradition, they are not redeemed.  Not yet.

Rather, they are comic characters whose task is unnatural and yet necessary. Their leaping around after flashes and recording them, for Kafka, may be astonishing and strange but it is “almost incomprehensible.”

In other words, it is not completely incomprehensible.  It is in these small flashes that we know that a rationalist like Sancho Panza knew that the keepers of tradition and heritage were on to something.

Bloch knew this as well.  I would like to suggest that every comedian, writer, or performer of schlemiel comedy also understands this: without tradition, there would be no comedy and there would certainly not be a schlemiel.  Perhaps this is the “only honest down-to-earth honest performance” there is?

One doesn’t have to be in the circus to be a part of the circus.  All one has to do is watch it and, for those who want to carry on its tradition, all they have to do is leap up at the “flashes,” sit down, record them, and do that again….and again.