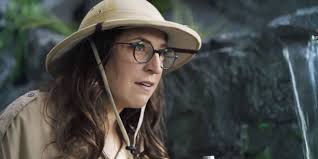 In this little clip, the schlemiel – in particular and in general – doesn’t understand why plastic bottles (which are everything in their world) are enslaving him (and her, all homoschlepeins) and why they are unnecessary.    He lacks reason.  She doesn’t.   Is he to be despised by the science teacher-slash-anthropologists?  The kids?  The answer to these questions brings the tension between the rational skeptic and naive schlemiel into focus.   One learns from the other and the lesson, Mayim shows us, is for the millennial children in pink shirts (who are straight up rationalists, not a “lost tribe”).  Will they take her love for a “lost tribe” to heart?

Here is the conceit.  While the anthropologist scientist is supposed to be critical of stupid Neanderthal-ish Homoschlepien, she is really charmed by him….and by them.  To be sure, the schlemiel culture is shown to be a lot like ours.  The young and old play games flipping a filled bottle of water.  Perhaps we are all like Seth Rogen’s favorite schlemiel character: the stoner schlemiel.   Like Mayim, we love the dadbod.  And, just like Mayim, we fall in love the subject of Mayim’s “scientific study.”   She is “studying him,” and we see what she is really doing: she is drawing pictures of him.

She is charmed by this cute big man.

To some it up, her demeanor is shared by millions of Americans.  She is in love with the charming schlemiel.  He’s a big lug who doesn’t know any better.  After all he’s schlepping bottles around all day.  He may be an “alpha male,” but he is really a softy.

Is he a part of a “lost tribe” – as the title of the piece suggests?  Many Americans today see themselves as a “lost tribe.”   To be sure, there is a Jewishness to this piece and an American-ness.  Like many a great Jewish American artist, Bialik claims both.

I see two comical narratives that are brought together in Bialik’s gesture.  One is Jewish and the other is not.  Like Cervates’ Sancho Panza, she follows her Don Quixote.  But this has many layers.  The people (or rather, the person) she is studying has a Jewish (scientific) name but posses a non-Jewish body.  The academic result of Bialik’s study of the schlemiel is clear to me: she sees the schlemiel as Jewish and not Jewish.   And she is right. It’s both.  And we don’t just study them, Bialik’s piece suggests that we – like her – embrace them.  These is something unique – and even redemptive – in this gesture.

Did you hug a big-schlemiel today?  Where’s “the fat jew“?

But the episode suggests – scientifically, of course – that death is looming.  After all Mayim’s studies what was, not what is.  She’s tracing the origin of this character.   There may be a death sentence looming in the framing of the this episode.  Artifacts of the past.

Will the schlemiel, as her kids suggest in her clip, continue to exist?  Will we, schlemiels, “Homoschlepiens” – who like to litter and live like large Americans – stop wasting bottles?  Isn’t this a ridiculous question?

Isn’t the real question whether in a very rational, hyper-scientific era, a world of schlemiels (of homoschlepiens) will remain?

Are we (schlemiels) going to be fixtures in the museum?  Objects of study?

These are all good questions.

But the greatest twist of all is that the scientist is really a schlemiel.  She loves the schlemiel’s charm.  Like Sancho Panza, Mayim the anthropologist also becomes a kind of Don Quixote (albeit one that is rational, but also human).   And in effect, this identification makes her one of the “lost tribe,” in makes her one of us: schlemiels.

It’s a lovely message and a hopeful one, especially for me.  I love the struggle she gages between the scientific skeptic and the schlemiel: Rabbi Nachman’s “Simpleton and the Schlemiel” makes this the crux of his tale which, as Ruth Wisse and David Roskies have noted, gives birth to much of Yiddish Literature and is really the first pieces of modern Yiddish literature (since Nachman was so hyper-self-aware and struggling with himself).

Thank you Mayim for being the nutty professor!  Comedy reminds us that we are human and that the “lost tribe” is – despite millennial dread – a part of “our tribe.”    We, humans. The schlemiel reminds us.

One thought on “A Lost Tribe: On “Homoschlepien” Schlemiels and a Nutty Professor in Mayim Bialik’s SodaStream Spot”