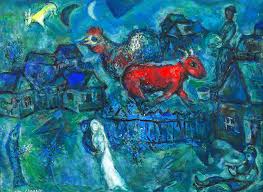 Throughout his novel by the same name, Saul Bellow’s Moses Herzog writes countless letters.  But he never sends them.   The letters show us what he really feels but cannot act on or things he would like to do or dreams about doing but never does.  His schlemiel character comes through in his reflections on his wife’s secret lover – and his good friend – Valentine Gersbach and in his academic reflections on the meaning of human nature.  Is man innocent and naive or born evil?  Herzog’s reflections – as a schlemiel academic who has lost control of his marriage – however, have good endings.  He may be alone in a house in the Berkshires – by the end of the novel – but he is still loved.

Herzog’s adorable predecessor is Shalom Aleichem’s Menachem Mendl.  The Further Adventures of Menachem-Mendl is a a series of letters between he and his wife Shyene-Sheyndl who lives in Kasrilevka.  What does the schlemiel find when he goes out into the world in the early 20th century?  What does he write about?  I.B. Singer’s Yasha, the “Magician of Lublin,” like Menachem Mendl, goes to Warsaw – the big city – to discover a new world beyond the Shtetl.  What does Menachem Mendl find there?  Amongst other things, he finds Zionism.

Reflecting on the Ottoman “Turk,” who posses the land of Israel before WWI, he makes a comparison and reflects on what its like to be a Jew in his letter to his wife:

True, we don’t have the problems the Turk had but we have our own problems.   And if you think about it, we have it worse than the Turk.  A thousand times worse!  The Turk, at least, has a home, a corner of his own, as your mothers says, “A poor landlord, but still a landlord….” But what are we? We are little more than a fancy sabbath gabardine, threadbare and torn. But what do we have for ourselves? Nothing with nothing, even less than nothing, shame and worry and anguish and heartache is what we have! What more do you need to know, my little silly?  One tiny parcel of Eretz Yisrael is all we have, for God’s sake, and that too comes with trouble and factions and competitive organizations and wrangling and quarreling and intrigues, spite, and controversies!  Since Thoedore Herzl, of blessed memory died, they can’t agree on anything.  (59)

The schlemiel worries about the Jewish people.  He worries about having just a little piece of land to call a home instead of endless exile.  Menachem Mendl shares this hope in his letter.  The schlemiel wants the Zionists to listen to his advice but…he can’t give it to his wife.  He will – like a prophetic messenger – give it to them himself:

If they would listen to me, the Zionists, I have for them, with God’s help, a special scheme that will open their eyes!  But I won’t talk about it ahead of time.  I’m afraid there might be a dispute even before anything happens.  I hope, God willing, to be in Vienna at the congress and can put it before them myself.  (59)

But he knows that they won’t listen because “for us Jews nothing can happen without quarrels.”  He realizes that he is a Yid, he speaks Yiddish, and they speak, primarily German.  They think of them as schlemiels in the most negative sense of the word.  If they were to speak Yiddish in their homeland, it would be like Chelm:

Yiddish no one wants to hear about…They hear the word Yiddish, “Zhargon,” they have a fit! And its possible they aren’t so far from it because how does it look for Jews to speak Yiddish?  It would be a find thing, do you hear, if a quarrel were to break out over language…This would not be revenge on the goyim (nations), but revenge on Jews.  It’s a cockeyed world with a cockeyed people with cockeyed minds! I figure I will soon get these people and clear out their minds a bit. But now isn’t the time for it.  Their heads are elsewhere. (61)

Menachem Mendl never goes.  And nothing happens.  He doesn’t change politics.  But he – like Herzog – has language and a host of dreams.  He lives in his letters while yearning for a land where – he imagines – Jews will always quarrel.   But his desire to live on a land – to live in peace there – supersedes all quarreling.  Its a simple need and its written all over this letter to his wife.  Like the artist, Freud’s daydreamer, he’s a small man with big dreams.   But, most importantly, he reminds us that this Jewish man is in exile, this schlemiel – at least in the early 20th century (and, I would argue, today) thinks about Israel because he worries about the fate of the Jewish people (of which he is a part).   Once one divorces himself from that, his fate is tied with America.  As we see with Seth Rogen films.  But, as Woody Allen has shown, in a film like Anything Else (2003), that need not be the case.  The schlemiel – in the spirit of Shalom Aleichem’s concern with the Jewish people – is put in relation to Zionism.  But – as Aleichem notes in this fictional exchange – he dreams of speaking before the Zionist congress.  He doesn’t do it.  What does this suggest?  I’ll leave you with this question.

2 thoughts on “Menachem Mendl: A Schlemiel Imagines Himself at the Zionist Congress”