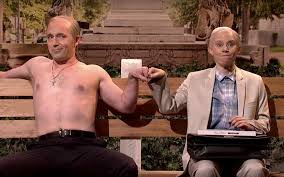 SNL has been making great use out of the schlemiel character.   Larry David’s portrayal of Bernie Sanders as a schlemiel was wildly popular and just recently, Kate McKinnon has portrayed Jeff Sessions as a variation of the Forrest Gump character.  While David’s interpretation of Sanders is more steeped in the Jewish-American version of the schlemiel (with his use of New York dialects and mannerisms), McKinnon’s take on Sessions is – like Forrest Gump – fully Americanized.

In his book, Coming Out Jewish, Jon Stratton cites Ruth Wisse who argues that the schlemiel is not a character of Anglo-American culture: “Natural as his emergence within Jewish culture may have been, the loser-as-winner was not an indigenous American folk-type, and there is much in his make-up that still goes against the American grain”(302).  Expanding on this, Stratton adds that the “high water mark in the Americanization of the schlemiel has been the very popular film Forrest Gump (1994)”(302).

While Gump is “intellectually sub-normal” and yet manages to come out shining, he is missing something fundamental to a schlemiel: what Stratton calls a “subaltern community.”  Without that, argues Stratton, the schlemiel “becomes most straightforwardly loser”(302).    What is lost and reworked is the “ambivalence of the Yiddish schlemiel.” The new tension is between what, “by all expectations,” he should be – namely, a “loser” – and what he becomes “an overwhelming success.”  While this is not what Stratton calls a “Yiddish moment,” it is a “Jewish-American moment.”   Nonetheless, it lacks the “ambivalence of feeling of a subordinate group.”

Stratton contrasts Gump to George in Seinfeld.  George, in contrast to Gump, is the “luckless character” but the “inability to take control of one’s destiny because of the power and oppression of the dominant group is reworked as lucklessness”(303).

The Americanization of the schlemiel – at least in this instance of SNL’s reworking of Gump – makes him into an “intellectually sub-normal” loser who also, because he is in office, a success.   His revealing secrets to people who sit with him demonstrates this innocent kind of Gumpian stupidity.   To be sure, the portrayal of Sessions – in no way – speaks to any “ambivalence of feeling of a subordinate group.”  It speaks to a prevalent (depending on how you parse that word) American view of Sessions, Trump, et al that is not ambivalent in any sense.

As I pointed out with Larry David’s portrayal of Bernie, not all American schlemiels are the same.   Woody Allen’s schlemiel is not in any way close to Seth Rogen or, for that matter, Larry David’s schlemiel is much different from Marc Maron’s version.   Despite these differences, the question about how they are Americanized remains.  Unlike George, we know these characters are explicitly Jewish.  But does this make a difference? Do American Jews still feel an “ambivalence of feeling,” as Stratton would say, or is that find of ambivalence a thing of the past since American Jews are in the post-assimilation stage?   Perhaps something more existential is at work and, as Ruth Wisse would say, the schlemiel’s comedy has to do with his character not his circumstances.  What, one wonders, is Jewish about this character when that existentiality appears to be American…and not Jewish?  Perhaps something Jewish remains. Perhaps that may only be – as Walter Benjamin argued with Kafka – a gesture.  But when it comes to Gump or the SNL version of Gump as Sessions, nothing Jewish remains.  Larry David’s take on Bernie (shoulder shrug)…that’s another story.