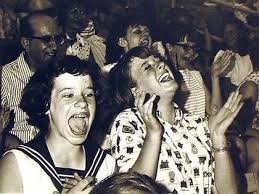 When Walter Benjamin wrote Gershom Scholem from Paris, on June 12, 1938 about Kafka, humor, and salvation, Adolf Hitler had already established his first work camp (1933), organized an anti-Jewish boycott (1933), burned “un-German” books (1933), passed the Nuremberg Race Laws (1935), sponsored an anti-Semitic art exhibition in Munich (1937), and annexed Austria (1938).   And only a few months later the Munich Agreement was signed and two months after that was Kristallnacht.   One should read the letter in this historical context.

In this letter, Benjamin shows a marked interest in reading Kafka through comedy.    However, the comedy he turned to was not satire.  It seemed as if Benjamin saw that option as futile since, after all, it hadn’t worked before to stop Hitler and his march to power.  (While Adorno and Brecht were much more interested in the political power of satire to challenge Hitler, Benjamin didn’t seem convinced; as is evident in Benjamin’s letters to Adorno and in Benjamin’s Brecht journals, which shows that Brecht despised Kafka because he wasn’t political enough, was too mystical, and, as Brecht, in his most anti-Semitic moment, claimed, promoted “Jewish fascism.”)

In his letter to Scholem, Benjamin turns to Kafka as a comic figure and argues that “Folly lies at the heart of Kafka’s favorites – from Don Quixote via the assistants to animals”(Correspondence, p. 225).  In brackets, Benjamin elaborates about what being an animal, in a comic sense, entails for Kafka: “(Being an animal presumably meant to him only to have renounced human form and human wisdom owing to a kind of shame – as shame may keep a gentleman who finds himself in a disreputable tavern from wiping his glass clean)”(225).   After noting this shame, Benjamin states what he believes is the underlying meaning of Kafka’s comedy, salvation, and its meaning….for us:

This much Kafka was absolutely sure of: First, that someone must be a fool if he is to help; second, that only a fool’s help is real help.  The only uncertain thing is: Can such help still do a human being any good?  It is more likely to help angels who could do without hope”(225).

In other words, while Kafka realizes and is absolutely certain that comedy is the only thing that can help, Benjamin thinks that Kafka also realized that it may not really help a human being.  The paradox, I would argue, has to do with political reality.  At this point in time (June 1938), Benjamin realized that satire couldn’t work but that, at the very least, comedy could help and offer some kind of salvation.   But this is, so to speak, a private matter. The ultimate good would be a new world.  Satire, at that point, had failed.  And the comedy of Kafka’s, which as Brecht and Benjamin would agree, is more private and mystical, seemed to be the last refuge.  In a real sense, there is nothing to laugh about in the world.  World negation – in a gnostic sense, with which he seems to be reading Kafka – appears as his last desperate attempt to find solace in a Europe which was giving in to Hitler and his anti-Semitism.

I think Benjamin’s reflection on the failure of satire and the bleak possibility of comedy to offer salvation gives us some food for thought today.  It articulates a problem that we are currently facing.   Many on the left today believe that Satire will galvanize the Left and be able to defeat Donald Trump.  A recent Salon article by Profressor Sophia McClennin entitled “Hitting Trump Where it Hurts: The Satire Troops Take Up Comedy Arms Against Donald Trump,” argues that there is a real movement against Trump in the comedy world that will (not may) succeed in briging him down.  Whether it is the comedy impersonations of Alec Baldwin or Mellisa McCarthy or the comedic routines of Steven Colbert or John Oliver, what she calls “laughtivism” will win the fight.

McClennin sees this as “our” moment and likens it to what Satire did in Eastern Europe:

Serbian satirical protestor Popovic explained that while humor has often been a part of protest, it is playing a bigger role in 21st-century struggle and that’s because it works: “Humor breaks fear and builds confidence. . . . The best acts of laughtivism force their targets into lose-lose scenarios, undermining the credibility of a regime no matter how they respond. These acts move beyond mere pranks; they help corrode the very mortar that keeps most dictators in place: Fear.”

That’s why we need to follow the lesson of Serbia under Milosevic. History teaches us that for satire to really be powerful, we all have to be in on the joke.

The satire resistance cannot be limited to professionals. It depends on all of us.

At the New York protest in January, Moore reminded people that they, too, can play a role in the satire rebellion: “Everybody here has a sense of humor. Use it! Use it! Participate in the ridicule and the satire for the emperor who has no clothes.”

And that’s one of the strongest signs that satire is a key part of the anti-Trump campaign. Every day an average citizen is mocking Trump and his team. There is even a Twitter parody account for Trump’s bathrobe.

The last words of the article suggest that this laughter is not aimed at winning new followers so much as galvanizing “us,” the base; it is “our laughter”: “Our laughter isn’t just making us stronger; it’s reminding us that fighting for our nation can be fun.”

In contrast to McClennin, Emil Nussbaum of The New Yorker, thinks that while laughter may strengthen the base, it will give more power to the opposition.  Her article, entitled, “How Jokes Won the Election: How do You Fight an Enemy Who’s Just Kidding,” makes the case that we are only fooling “ourselves” if we think that comedy has a chance of winning.  Trump uses comedy to his advantage. When people make fun of him, he gains more power.  He will, as she argues, become more serious now. And while the world not flings jokes at him, his dialectical contrast pronounces a different strategy:

When Vladimir Putin was elected President, in 2000, one of his “first acts was to kill “Kukly,” a sketch puppet show that portrayed him as Little Tsaches, a sinister baby who uses a “magic TV comb” to bewitch a city. Putin threatened to wreck the channel, NTV, unless it removed the puppet. NTV refused. Within months, it was under state control. According to Newsweek, “Putin jokes quickly vanished from Russia’s television screens.”

Soon after Trump was elected, he, too, began complaining about a sketch show: “Saturday Night Live,” which portrayed him as a preening fool, Putin’s puppet. His tweets lost the shape of jokes, unless you count “NOT!” as a kicker. He was no longer the blue bear. Instead, he was reportedly meeting with Rupert Murdoch about who should head the F.C.C. Soon, Trump would be able to shape deals like the A.T. & T. and Time Warner merger, to strike back at those who made fun of him or criticized him, which often amounted to the same thing. Fox would likely be Trump TV.

Last week, at his “First press conference as President-elect, Trump made no jokes. He was fuming over the BuzzFeed dossier and all those lurid allegations worthy of “South Park,” the pee jokes lighting up Twitter. Only when he reminisced about his rallies did he relax, recalling their size, the thrill of the call and response. He almost smiled. But when CNN’s Jim Acosta tried to ask a question about Russia, Trump snapped back, furiously, “Fake news!”—and the incoming White House press secretary, Sean Spicer, told Acosta that if he tried that again he’d be thrown out. Now, it seems, is when Trump gets serious. A President pushes buttons in a different sense. As Putin once remarked to a child, “Russia’s borders don’t end anywhere”—before adding, “That’s a joke.”

This kind of reading was, just yesterday, amplified by Slajov Zizek.   In his interview with “Channel Four News,” Zizek argues – 3 minutes in to the recording – that the left also laughed at Hitler for his first few years in office. But, as one can see in light of the events I took note of in the beginning of this essay, that “laughtivism” did nothing to stop him.  Zizek notes that Trump – like Hitler – may bring jobs back to the country and improve the economy.  This will have a positive affect on his populist base.  And this, argues Zizek, does not call for what McClennin calls “laughtivism.”  On the contrary, it will require a serious appeal to policy and ideas.

Zizek sees two audiences that are disparate. The one that laughs – the academic, media, and political elite – and the one that isn’t laughing.  The latter, argues Zizek, is larger and will be impressed with Trump’s accomplishments.  The laughter and non-stop humor will only confirm what they think about the left being “out of touch.”

I was born and raised in a small town in Upstate New York which has, for nearly a decade, had the highest unemployment rate in New York State.  (Before exporting leather to China, it was the largest leather producing city in the USA.)  The people want jobs.   That’s why many of them voted for Trump.   They aren’t laughing at many of these jokes.   They don’t find laughtivism appealing.  With this in mind, I can see how Zizek is on to something when he argues that laughtivism may be a failed strategy and that if it keeps on going in this direction it will hit a wall.  (Likewise, just this morning on NPR, Ryan Holiday – who knows the Trump-Milo-Bannon strategy very well, since he worked with them – argued that they will feed off of being made fun of and being laughed at.)

Kafka and Benjamin knew that comedy is the only thing that can help, so does McClennin.   However, Benjamin differs on the meaning of that help (as does Zizek).    Zizek, in the clip, calls himself a “pessimist” because he doesn’t think humor is the winning strategy (the irony is that he usually appeals to humor as a political tactic; and, in other places, he contrasts “cynicism” to “kynicism,” which is more like an activist kind of humor).   The take away is that while humor, as McClennin argues in her article, had a positive effect and fomented change in the past, it may not be the case over here.  I’ll let the reader think it over and decide.  What we need to do is ask who is laughing and whether, in the end, there will be more people laughing than sighing.