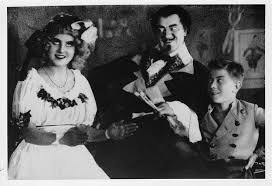 Small people can be found throughout the folklore, religion, and literature of the west.   But what is more interesting is not that there are small people but why or how they become small and what this becoming means. One may be made small by reality (which crushes one to a pulp), one can make oneself small, or one can be made and make oneself small.

Smallness is a persistent theme in the Torah and in the literature of Franz Kafka, Paul Celan, Shalom Aliechem, I.B. Singer, and even modern Jewish American writers like Gary Shteyngart, Shalom Auslander, Cynthia Ozick, and Dara Horn (to name just a handful of Jewish writers who span continents, time periods, and languages).   There is also a deep meditation on smallness in Hasidic, mystical thought and in the Kabbalah of the Ari (Rabbi Isaac Luria).   Despite the fact that some scholars have addressed the mystical aspects of Celan and Kafka’s work, few, however, have looked into the relationship between the Jewish mystical tradition of becoming small and the motifs we find in their texts. Moreover, few have looked into how this relates to the smallest and most simple comic character of all (which we find in Kafka, Aleichem, Singer, Shteyngart (et al) and even Celan): the schlemiel. Since it can open up new convergences of literature, religion, mysticism, and Jewish philosophy, this is a task for schlemiel theory.     (In these notes I will take a brief look at the link between smallness – in Jewish mysticism and in Kafka’s “Josephine the Singer, or the Mouse Folk.”)

We find a recurring meditation on becoming small with either the zaddik (righteous Jew) coming close to God or, in Hasidic thought, bringing Torah to simple folk. In Mysticism and Madness: The Religious Thought of Rabbi Nachman of Bratslav, Zvi Mark lays this out in terms of three basic types of smallness which speak to being made small or making oneself small (of fate and volition):

Mark goes on to note how Gershom Scholem, in his essay “Deveikut,” states that the “use of concepts of ‘smallness’ and ‘greatness’ represent a completely novel redaction of the kabbalah of the Ari.” And, building on the work of the Kabblistic master, the Baal Shem Tov “transfers these concepts to the realm of the human and gives new meaning to theosophical ideas.” But, notes Scholem, the transference made by the Baal Shem Tov puts a “new emphasis on psychology instead of theosophy.”   (Also see what I have written on Scholem’s reading of simplicity and smallness with respect to Marranos, Sabbatians, and Hasidim.)

Putting Scholem’s claims to the side – which speak directly to his claim that the Hasidim have “neutralized the Messianic idea” that Sabbatai Zevi had brought into reality and turned it inward – there is much to say about how the theosophic dimension of smallness finds a place in the storytelling of Rabbi Nachman of Breslav and in the stories of Franz Kafka. What’s even more interesting is how smallness – in a theosophic sense – finds its way into these stories by way of comedy and literary figurations of childishness.

One Kafka story that delves into smallness is “Josephine the Singer, or the Mouse Folk.” Kafka’s title juxtaposes Josephine and the people, a distinction that has resonances in the Torah (as between Moses and the Jewish people) and in Hasidic thought (the zaddik and the common people).   This is confirmed by the fact that although Josephine is a leader and helps lift the people up by “song,” she is no bigger than any of them. And, like them, she is a mouse and is crushed and made small by reality. Despite this, she seems to somehow appeal to something big:

Our singer is called Josephine. Anyone who has not heard her does not know that power of song. There is no one but is carried away by her singing, a tribute the greater as we are not in general a music-loving race. Tranquil peace is the music we love best; our life is hard, we are no longer able, even on occasions when we have tried to shake off the cares of daily life, to rise to anything high and remote from our usual routine as music. But we do not much lament that; we do not even get so far….Josephine is the sole exception…she is the only one; when she dies, music – who knows for how long – will vanish from our lives. (360, Kafka: The Complete Stories)

After stating this praise of Josephine, the narrator of the story corrects himself and makes himself and Josephine small by noting that he doesn’t know if she or they sing so much as “pipe.” And this piping, since it isn’t an art, is just something that is common, small, and simple:

So is it singing at all? Is it not perhaps just a piping? And piping is something we all know about, it is the real artistic accomplishment of our people, or rather no mere accomplishment but a characteristic expression of our life. We all pipe, but of course no one dreams of making out that our piping is an art, we pipe without thinking of it, indeed without noticing it, and there are even among us who are quite unaware that piping is one of our characteristics. (361)

The smallness of this people – according to the narrator – comes out through the children (who can’t even pipe). While the children can only “lisp” and “chirp,” the adults feel a lament that they aren’t children. Even this piping is too much of an assertion of power for them. Nonetheless, the narrator comically laments that all the mice people can’t escape children, being childish, small minded, and foolish:

We have no schools, but from our race come pouring at the briefest intervals the innumerable swarms of our children, merely lisping or chirping so long at they cannot yet pipe, rolling and tumbling along by sheer impetus so long as they cannot run, clumsily carrying everything before them by mass weight so long as they cannot yet see, our children! And not the same children, as in those schools, no, always new children again and again without end, without break…Truly, however….we cannot give a real childhood to our children. And that has its consequences.   A kind of unexpended ineradicable childishness pervades our people; in direct opposition to what is best in us, our infallible practical common sense, we often behave with the utmost foolishness, with exactly the same foolishness as children. (369)

Becoming like a child, they are able to receive the song (or “piping”) of Josephine. Her piping isn’t that of “practical common sense.” It is, rather, the common language. But what Josephine does with it is liberating.

Piping is our people’s daily speech, only many a one pipes his whole life long and does not know it, where here piping is set free from the fetters of daily life and it sets us free too for a little while. We certainly should not want to do without these performances. (370)

And in making herself like them and trying to communicate with them in their language, she, like a zaddik (as understood by the Hasidic idea of becoming small) gives the mouse people a sense of something larger, more intimate, and liberating. But this something is common to all of them; it is shared.   And because it is small and speaks to smallness, her piping doesn’t purport to elevate itself above the childishness and schlemielkiet of the people.   The lament of the narrator at the people’s childishness is displaced when she pipes because it makes them forget and prompts them to let go of their practical and skeptical sense of their smallness.

One thought on “Becoming Smaller: Notes on Smallness in Kabbalah, Hasidic Thought, and Kafka”