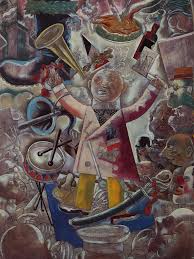 In Kafka’s diaries and in stories such as “The Metamorphosis,” there is a struggle to move from the spot one is located in. Kafka wonders if he can move, if he wants to move, and whether he would be happy if he did. Meanwhile, he – like Gregor Samsa stuck in his room –  doesn’t go anywhere.

On January 24, 1922, Kafka, drawing on a Kabbalistic notion of the transmigration of souls (and reincarnation) imagines his “hesitation before birth.”   “If there is a transmigration of souls then I am not yet on the bottom rung.   My life is a hesitation before birth.” Kafka is not excited about being born into a new body; he would rather hesitate than be reborn. And, given the notion of movement and cycling, this suggests that he doesn’t want to move and start again.   He doesn’t want to develop; however, he tells himself that he wants to change his place. The punch line is that he wants to be on another planet:

Kafka wonders if simply “considering” his “spot” to be a spot on another planet would be sufficient. This suggests that Kafka wants to imagine movement.   He is “steadfast” in not moving but this inertia creates desire.

But Kafka, it seems, wants to be discontented. He wants to be unhappy about the fact that he is not going anywhere:

While I was still contented, I wanted to be discontented, and with all the means that my time and tradition gave me, plunged into discontent – and then wanted do turn back again.

Kafka admits that this is a “childish game” and is astonished at how “make believe, in engaged in systematically enough, can change into reality.” But this reality, created my his make-believe games, is unhappy. He has, as I mentioned in elsewhere, cultivated failure.

And these childish games, claims Kafka, “marked the beginning of my intellectual decline.” Kafka posits two possibilities regarding his unhappiness, inability to move, and his misfortune. Either he forced misfortune upon himself by playing “childish games” that get him nowhere, or it was forced on him:

If it is possible so as to force misfortune upon myself, it is possible to force anything upon oneself….I cannot grant that the first beginnings of my unhappiness were inwardly necessitated; they (the beginnings of his unhappiness) may have indeed been a necessity, but not an inward one – they swarmed on me like flies and could have been easily driven off.

But now they cannot and he hesitates. But he is actually happy that he hasn’t moved anywhere: “My unhappiness on the other shore would have been as great, greater probably (thanks to my weakness).” In other words, no matter where he moves, he will still be unhappy because the “first beginnings of his unhappiness” are a part of his being.   He sees himself as “put here as a child” and is “chained to the spot.” This knowledge, that is too late, informs his sadness. He can’t move.

Sad, and with reason. My sadness depends on this reason. How easy it was the first time, how difficult now! How helplessly the tyrant looks at me: “Is that where you are taking me!…When other people approached this boundary – event to have approached it is pitiful enough – they turned back; I cannot.   It seems to me as if I had not come by myself but had been pushed here as a child and then chained to this spot; the consciousness of my misfortune only gradually dawned on me, my misfortune was already complete; it needed not a prophetic but a merely penetrating eye to see it.

Kafka is stuck on the threshold (the boundary). And consciousness keeps him there. And he tells us, at the end of his passage that he has a “right” to despair over his situation of being abandoned at the boundary and unable to move from the spot.

However, the next day, he dreams of rising above this situation which is the situation of a schlemiel:

I must be above such mixtures of bad luck and clumsiness on my own part as the mistake with the sled, the broken trunk, the rickety table, the poor light, the impossibility of having quite….Such superiority cannot be got by not caring, for one cannot remain indifferent to such things; it can only be got by summoning strength.

Kafka’s hope, his strength, is that “surprises” can still happen – “this the most despairing person will allow; experience proves that something can come out of nothing, the coachman can crawl out of the tumble-down pigpen.”

But one cannot “make a life for oneself” out of chance or, as Kafka says, “as a tumbler makes a headstand.” Rather, the “strange, mysterious, perhaps dangerous, perhaps saving comfort that there is in writing: it is a leap out of a leap out of murderer’s row; it is a seeing of what is really taking place.”

And that seeing – which his writing – may be of his childish games and the fact that he can’t move. Writing about failure may be his leap of faith, but then again he may still go nowhere and be “chained to this spot.” Kafka – out of desperation – is willing to take this risk.  If this is a leap, then it could outwits his  wager with madness – which, as a “cultivating of failure,” keeps him from moving.  Then again, he may not have the strength to leap out of his chains.  Perhaps he will remain “chained to this spot” which is….in front of the page.   But, still, as Kafka notes, surprises happen and every unhappy person must accept that possibility.