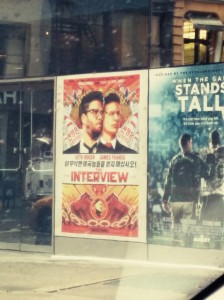 Don’t you love those moments when you can’t tell if something is serious or a joke? I had one of them yesterday and it created a delicious ambiguity around how the schlemiel may get lost in translation.

While walking through Manhattan yesterday, I stumbled across a poster that caught my eye.   On the front of the poster, I saw an image of Seth Rogen and James Franco which portrayed them as one would portray Lenin and Stalin (or “the people”) in a Socialist Realist image.

As in Soviet and Chinese Social Realist images, we see Franco and Rogen in profile gazing fearlessly, like Lenin, Stalin, Mao, or the workers of Russia, at the future. Like these leaders (and like the people) as portrayed in classical propaganda posters, I thought of Rogen and Franco as self-possessed and confident about the future. 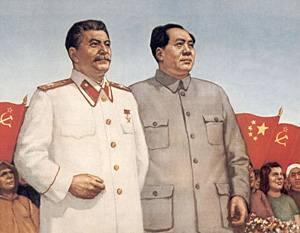 But then I thought, no, that’s not possible. These two, in a film like Pineapple Express (2008) or in last year’s parody of a Kanye West’s “Bound 2” video are schlemiels.

To be sure, their “Bound 3” parody video, which I have written on (here and here) takes the cake. In both the film and in this short clip, they don’t portray self-possession so much as parody it.

What, I wondered, was going on with this poster. I saw the Chinese characters (ideograms) beneath their names, coupled with the words “The Interview” below; and, immediately, I was convinced that there must have been an interview with Rogen and Franco in China or Korea.   But, more important to me, was how Rogen and Franco’s images were represented for an Asian audience.   Do the poster makers, and the culture itself, misunderstand how to portray the image of two comedians? Something seemed awry here. It didn’t make sense. How could there be such a misunderstanding of the schlemiel? Is the culture so serious as to not understand comedy.

It bothered me all day.

When I got home, I did some research and discovered that this was an advertising ploy to get me to think about Rogen and Franco’s representation. It was, in fact, a teaser-poster for their soon-to-be-released film entitled: The Interview.   It will be released on December 25th.

Looking over the trailer I wondered if this was Rogen and Franco’s attempt to one-up Sasha Baron Cohen’s The Dictator. And if it was, it failed to even come close.

Six days ago, The Guardian noted that the film has caused a little controversy in North Korea since Rogen associated it with Kim Jung Un’s recent disappearance:

Seth Rogen has joked that the recent disappearance of North Korean supreme leader Kim Jong-un was mounted as a marketing ploy for the actor’s new comedy, The Interview.

In comments reported by the Press Association, Rogen said the autocrat’s missing 40 days could not have come at a better time to promote the new film, which riffs on an attempt by a US talk show host and producer to assassinate Kim Jong-un live on TV with help from the CIA.

“It’s all a marketing ploy,” said the actor and film-maker, who stars in the comedy alongside James Franco and Lizzy Caplan. “We’ve hid him somewhere, and he’ll be released one week before the movie.

He continued: “It is amazing. It’s almost as if we gave [Kim] a list of, ‘Here’s what you can do that would help promote our film.’ And he’s doing pretty much all of it.”

Since the movie is not so much about an “interview” as an assassination attempt on Kim by two characters who one would think are schlemiels, it has stirred controversy in the North Korean side. To be sure, The Guardian, in another article, notes how North Korea “blasted” Rogen for the film. One of North Korea’s self-described “unofficial spokesman” said the film tells us more about American desperation than about North Korea and it’s supreme leader:

In an interview with the Daily Telegraph, Kim Myong-chol dismissed The Interview’s lampooning of Kim Jong-un out of hand and said American film-makers should look to their country’s own history. “There is a special irony in this storyline as it shows the desperation of the US government and American society,” he said. “A film about the assassination of a foreign leader mirrors what the US has done in Afghanistan, Iraq, Syria and Ukraine. And let us not forget who killed [President John F] Kennedy – Americans.

“In fact, President [Barack] Obama should be careful in case the US military wants to kill him as well,” added the spokesman for good measure

After reading these reports, seeing the trailer, and giving it a little thought, I wonder, like Charles Baudelaire once did in his prose piece “A Heroic Death,” what happens when fools get involved in death plots. As the narrator of “A Heroic Death” points out, they fail. But the punch line, for Baudelaire, is that they fail miserably and their comedic plot turns bad.

Although I was drawn in to the premise by way of the poster, I wonder if this will turn out bad. This kind of plot may be a dead end for the American schlemiel. And perhaps, after the success of a film like Neighbors, Rogen has hit a dead end.

After all, social realism, like the movie poster, is not comedy. It is its antithesis.

Let’s wait…and see if there is something to laugh about.