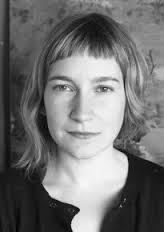 Sheila Heti – the author, narrator, and main character of the comic novel How Should a Person Be? – has fears that if she trusts someone, she may hurt someone and hurt herself. But, as we learn from the prologue, she has to if she is to learn how a person should be. She doesn’t look inside herself; she looks to others. This conflict, at the core of her being, makes her experience of herself and the world more fragmented.

To bring out the fragmentation, Heti introduces emails to her narrative and, in addition, she does something odd and irritating with them: she breaks the emails into numbered lines that have no explicit reason for being numbered save for the order.   These emails punctuate the text and complicate the narrative with information which may or may not be relevant. Here is a small snippet of the first email from Margaux, which, however, does have relevance since it shows a tension between actions and expectations that Heti has of others. It also shows major distrust and insecurity:

1. i have always admired a lack of social obligation, in fact, i aspire to it. the number of birthday parties i attend is too many, apart from that, i assumed you weren’t coming to my party and you did not.

2. at my party, you husband, probably being noting but sweet and drunk and feeling generous, and probably having nothing to do with your sentiments, said, “hell, you and Sheila should spend more time together.”

3. and i laughed and thought nothing about it.

4. but then when i saw you in the street yesterday, i was very annoyed and probably annoying. my annoyance was unfair and a little silly.

The email ends with a kind of apology which recurs throughout the text in a certain manner; especially between Margaux and Sheia. Both make “mistakes,” feel ashamed, and apologize (especially Sheila). (Apology, to be sure, is a major part of Toronto culture, the milieu of this novel; wherein the average citizen says “I’m sorry” often in day-to-day life.)

Immediately following this email, Sheila says she is “thrown off” (in other words, the email astonishes her; and, as I have noted above, astonishment is a key feature of the schlemiel).   To be sure, the email makes Sheila feel special. Her excitement and astonishment becomes disturbed. This is evinced by the fact that as she wanders through the neighborhood she “zipped and unzipped my jacket as my body went from hot to cold”(31). She muses that this it is a curse and a blessing to “have a woman,” and she launches into her inability to understand women (herself being one) and their relationships with each other: “I supposed I didn’t trust them. What was a woman for? Two women was an alchemy I didn’t understand….It would have been too easy to count the ways I had been betrayed by girls, all the ways I had been hurt by them. And if I wanted, I could have easily made a list of all the girls to whom I had caused pain”(32)

The schlemiel, to be sure, has trust issues. But usually they are usually the other way around. The schlemiel trusts others and is betrayed. Here, the schlemiel is wary of trust because she has been burned so many times before. Sheila, this schlemiel, is more reflective on the meaning of trust than the character; and, in a postmodern sense, she does what the reader would do vis-a-vis what we find in a story like “Gimpel the Fool”:

Trust has to be won from zero at every encounter. That’s the reason you always see women being so effusive with each other – crying out shrilly upon recognizing each other in the street. Women have to confirm with each other, even after so many years: We are still all right….A woman can’t find rest or take up home in the heart of another woman – not permanently. It’s just not a safe place to land. I knew the heart of a woman could be a landing ground for a ma, but for a woman to land in another woman’s heart? That would be like landing on something wobbly, without form, like trying to stand on Jell-O. Why would I want to stand tall in Jell-O? (33)

In other words, Sheila, at this moment, is thinking about how much a failure and waste of time it would be if she tried to gain Margaux’s trust. However, in an odd follow up to this reflection, Sheila talks about her “first day at typing school”(33). Although the scene is odd, the theme of the text gives us a cue as to how this is connected to the reflection on women. While noting that she smiles at everyone, Sheila says that she regards all of the other people in the class as “liars” but she “wants them on her side.” She wants to be their “hero”(34). She “prayed” that she wouldn’t “create any enemies”(34). However, like a schlemiel, she fails, and realizes that she can’t use “wit” (as many schlemiels do) to win: “By the end of the first afternoon, they were laughing at me….I saw I wasn’t going to outwit them. Those people didn’t deal with wit”(34).

As in Woody Allen’s Anything Else -when Jason Biggs tells Allen that he and Allen can outwit two bullies by wit and Allen retorts that this won’t do – she realizes that she can’t win through wit because she belongs with the “liars and the weaklings”(34); the “jocks” have a different “interior” and have an “integrity that springs from the very center of the earth itself”(34).

This distinction is at the core of the latter day schlemiel. And though, as we can see above, she is wary of having a relationship with Margaux because of what she envisions will happen, she receives two more emails from Margaux that suggest to her that Margaux is a lot like her: she seems to be absent-minded and has a different interior that the jocks; she is a weakling of sorts, too. But, more importantly, Sheila can see that Margaux, in one of the emails, really wants to be her friend. It seems as if she can trust Margaux from email lines like this which Sheila all numbers “1”:

Following this, Sheila becomes childlike and remembers a poem she used to read in Hebrew school:

Love is something if you give it away,

Love is something if you give it away,

You end up having more.

Hold on tight and you won’t have any!

Lend it, spend it, you’ll have so many,

They’ll roll over the floor, oh!

However, when she reflects on the poem, she becomes perplexed about what it means to give. The central metaphor of the poem distracts her from it’s content:

This seemed impossible to me, just crazy! If you give it away you’ll end up having more? It was the only poem I knew and my favorite one, for it baffled me. I recited it over and over to myself, as if there was something I could learn from it. In my head, in rooms in homes, zillions of pennies rolled over the floors, thick and encompassing like waves. (38)

She thinks these thoughts while “overcome with wonder” and drifts into thinking about something arbitrary: Margaux’s “grade-six graduation ceremony” in Texas (where she lived). She imagines her dressed like a schlemiel, with clothes too big for her. But there is a difference. Though she is laughed at by the audience, Margaux’s “dignity” is “in tact”(38) while, as we can see from her humiliating experience in the typing class above, the laughter at Sheila makes her vulnerable and affects her sense of self.

The dialectical back and forth between taking risks or opting out of them is at the crux of these types of reflections. The end of chapter three drives this home since he see that she, like a schlemiel, lets optimism overtake her cynicism: “For so long I had been looking hard into every person I met, hoping I might discover in them all the thoughts and feelings I hoped life would give me, but hadn’t”(38). She muses on how people have told her, however, that looking to others for hope is a dead end; and that it is better to “find such things in yourself, that you cannot count on anyone to supply even the smallest crumb that your life lacks”(39). This thought, nonetheless, doesn’t keep her from deciding that it is worth taking risks with Margaux, hoping that she would learn something how a person should be: “Although I knew this might be true, it didn’t prevent me from looking anyway. Who cares what people say? What people say has no effect on your heart”(38). The last words are the most telling since these are the words that can only be said by a schlemiel who trusts his heart over his head. This kind of logic is the logic of the schlemiel and one can assume that it will lead only to disappointment or some mistake.   Although trust is the basis of religion and society, the virtue of the schlemiel is to show us the other, more existential side of trust wherein the one who trusts often fails. For Heti, trust is a risk; but one that must be ventured.