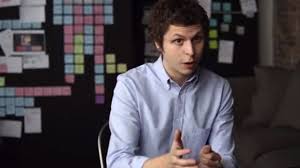 Michael Cera, who played a main role in Arrested Development (2000-2013) and starred in such films as Superbad (2007), Juno (2007), Year One (2009), and This is the End (2013), recently decided he wanted to direct his own film short. Cera’s film short, Brasserville Teenager, is based on a short story by Bruce Jay Friedman. The story, written over thirty years ago, was re-written by Cera with Bruce Jay Friedman. And like any translation of text into film, something is lost here and something is added there. What interests me most is the portrayal of the schlemiel and humiliation in the film. To be sure, in this filmic translation the humiliation is greatly diminished and the schlemiel is displaced by the special effects which turn the film more toward a symbolic dimension (reminiscent of a David Lynch film) than toward a deeper understanding of the schlemiel’s failure and frustration.

Let’s go through the short story first and then compare notes.

The story starts out with the hope of the schlemiel, Gunther:

He had always felt that perhaps a deathbed scene would unite them; he and his father would clutch at each other in a sicklied fusion of sweetness and truth, the older man dropping his lifelong cool, finally spilling the beans, telling Gunther what it was all about. (9)

The narrator’s tone already suggests that Gunther’s hopes might be a little off. As the story goes on, we see that, in this schlemiel scenario, there is a big gap between the father and the son. The son feels that this event “would unite them.” However, as the story shows us, nothing changes in the end. But it’s the journey to that point which matters most.

The main conceit of the story is that, after Gunther leaves his father, all he can think about this how his father’s “knuckles” have enlarged and that his body has been “whittled down.” He is saddened by his reduction of his role model; following this, however, an idea comes to him which, somehow, will change everything:

The idea came to him that if he, Gunther, were to debase himself, to do something painful beyond belief, the most embarrassing act he could imagine, only then could his dad recover…The instant his plan formed, he wanted to tear it form his head. (10)

This idea is childish and presupposes some kind of magic that will occur if he does something. He becomes obsessed with this idea. His plan is to get his boss, Hartman, to sing backup vocals in a song called “Brazzerville Teen-Ager”:

It’s about a young boy whose father is a mercenary and gets sent to the Congo. The boy goes along and write this letter back to his girl from the States, talking about how great it was surfing and holding hands and now here he is in Brazzerville. (10)

Since he knows the producer, he feels he can coax him to let his boss, Mr. Hartman, sing back up vocals.

After he finishes telling Hartman what he would like to do, Hartman, bewildered, tells him “You’re still not coming through”(11). And he proceeds to ask him the logical question: “What’s the connection between all this and your father’s sickness?”   In response, Gunther tells him that “I can’t explain it…I’ve learned that if I can get you to do this thing, which of course is way out of your line…Dad will recover”(11). Hartman asked him what he means by “he’s learned” and all Gunther can say is that he just “knows it.” Gunther asks Hartman to “forget the logic part” because he really “feels” it’s true. In response, Hartman tells him to back into the office and to “forget you ever made this little speech.”

After this experience, while driving around at night, Gunther congratulates himself for speaking his mind. Although he failed to get Hartman to do it, at least he spoke. But then he gets an idea: “If I got myself to say something like that to a boss, there’s no limit to what I can do”(11).   This spurs him to drive out to Hartman’s house and speak more.

What’s so interesting about what spurs him is the fact that in his speaking to a superior, his boss, he feels as if he has done something life changing. This, no doubt, has to do with speaking the truth to his father. Apparently, he never gets to speak his mind; and this is what troubles him most about his relationship with superiors and elders.

When he arrives at Hartman’s house, he stumbles into a party of the rich and powerful. They humor him and Hartman nearly fires him there on the spot. But Hartman’s wife comes to the rescue and tells Hartman to do it because Gunther, “the poor fellow is quite upset. It will cost you very little and it might be fun”(12).

Hartman goes ahead and does the backup vocals.   He is asked to “girl it” in his “doo wahs.” And he does so. Following this humiliation-of-sorts, Gunther drives him home and sees someone flipping pancakes in a store front. He pulls over, asks Hartman to filp one, and gets the owners approval. Hartman does this, too.

The next scene we learn that the Gunther’s father is better. He helps him pack up and go. But when he starts thinking about all the things he wanted to ask him, as he did at the outset of the story, and says “Dad.” He chokes up and fails to speak. The father asks him what, but Gunther says “nothing.”

In the last section of the story, on the way from his father’s apartment Gunther stops the elevator between floors. And then he screams out, “You son of a bitch! You know what I had to go through to get you on your goddamn feet?”(14)

In Cera’s rendition of the story, much is the same except 1) the film includes a male interlocutor in a bar who speaks with Gunther; 2) the conversation with Hartman (played by Jack O’Connell) has words like “lesbian” and the expression “rock in my show”(5:28); 3) the wife says she will “wet” Hartman’s “whistle” if he goes (a sexual allusion that isn’t present in the original); 4) Gunther says, after getting Hartman onboard, “Once in a while you’ll meet a crazy person who will go along with you no matter what”; 5) the music studio scenes bear mention of having “one heart” and include scenes that aren’t in the story; 6) the recording scene is morbid, like a David Lynch film; 7) Hartman, unlike the story, is moved by the music; 8) the pancake flipping scene is deleted; 9) the scene with his father (played by Charles Grodin) is incredibly long.

What I liked about the film version of the story was the fact that it brought out the divide between emotion and masculinity. We could clearly see that doing a good deed made Hartman more kind, which is something we don’t see in the story. And we also see the divide between Gunther and his father in a clearer manner. Most importantly, I like how Cera used the timing of the film to illustrate the differences between the father and the son. It shows how they continually miss each other and how the father has become a grumpy older man while his son remains a schlemiel who cannot speak to him face-to-face.

In the end, Gunther is the schlemiel because, in his mind, his action and his feeling should be enough to heal his father and unify them; ultimately, however, he remains a person who screams “between floors.” He is caught between being a man and a child. He wants to have a “normal” relationship but can’t say the right things to make it happen. His prank on Hartman took some kind of odd-courage, but, ultimately, he can’t bring that courage to his real-life relationship with his father.   His feelings and his prank can’t do it. He has to let go of that magical connection that all children, in some way, think exists between reality and emotions. But he can’t.

Cera’s film, at the very least, is faithful to this message in Friedman’s original story. This isn’t lost in translation, however, it is amplified.