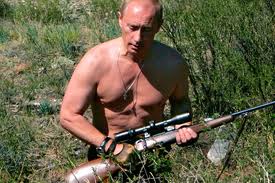 I often do my utmost to stay away from contemporary politics in my blog, but I had to write something in response to a sound byte I recently heard in the media.   In a recent radio show, Sean Hannity – the well known TV host for Fox – claimed that “The Russian media keep showing a picture of [Obama] in Martha’s Vineyard, riding his little bicycle with his little helmet on. It’s so humiliating.”  Following this, Hannity evokes an image he had seen of Putin expressing his masculinity.  And he juxtaposes one image to the other:

Just – the picture of Putin swimming the butterfly, which is a real hard stroke. Yeah, big chested – and by the way, it’s in frigid water that he’s swimming across a river … so you got a picture of that juxtaposed next to Obama on a bicycle in Martha’s Vineyard with the goofy helmet on riding his bike.

Meditating on this image, Hannity said he was, for the first time in his life, “humiliated for my country.”

What I find so interesting about Hannity’s juxtaposition of President Obama to Vladmir Putin is that it finds resonance with the way German Jews (and many anti-Semites) thought of Eastern European Jews; namely, as weak, effeminate, and childish (that is, as schlemiels).  They thought of the schlemiel as a remnant of the degenerate “ghetto” Jew and called for what Max Nordau (the Vice President of the Zionist Congress) called the “muscle Jew.”  The New Jew, as Daniel Boyarin and others point out, was envisioned as the anti-thesis of the schlemiel.  Jews, Boyarin argues in his book Unheroic Conduct, were to take David or Bar Kochba, Jewish warriors, as their role models.  Jewish gyms were opened all over Germany and Jewish athleticism was celebrated.

The contrast didn’t come out of nowhere.  To be sure, athleticism and masculinity go hand in hand with state building whether it was 19th century Europe or 20th century America, showing “strength” is thought to be essential to being a nation.  One needs to protect one’s citizens and fight for the country if the state is to live.  A state led by a schlemiel, on the contrary, would, historically, be seen as a joke.  And for that to be a reality would be “humiliating.”  Russia, as Hannity understands it, still lives according to this masculinist paradigm, but America does not.  And this humiliates him.

Hannity, like many Jews in Germany before the Holocaust, wants strong citizens and, most importantly, a strong leader.  His juxtaposition of these images shows us that Hannity sees Obama much like many conservative pundits saw the Pajama Boy (who was the mascot for one of the phases of Obama’s Affordable Health Care Act).   Jay Michaelson, writing for The Forwards, went so far as to dub this criticism of Pajama Boy anti-Semitic.

Writing in response to this, I felt Michaelson went to far.  He was reading too far into it.  Nonetheless, the same issues come up about masculinity and politics.  I think it is worth our time to think about this relationship.  To be sure, Hannity is not wrong to see Putin doing this because Putin is, without a doubt, drawing on the image of leadership and masculinity (take a look at any number of images of Putin running around with his shirt off and a gun in his hand).  Hannity wishes President Obama would do the same.  And, to this end, he sites Benjamin Natinyahu as a model of leadership because Hannity sees him as a “real man.”   And this analogy is telling, given the fact that Israel was in many ways deeply impressed with the idea of the “New Jew” as a Jew who is independent and strong.

That said, what does the image of “strength” mean?  Would we all feel better about being Americans if President Obama was much more intimidating?  Would we all feel better if we saw images of him “swimming the butterfly” or engaging in rigorous physical activity? Would that send a better message to the world?  Hannity sure thinks so.  And because he doesn’t see it, his own masculinity, it seems, has been affected.

After all, Hannity has been wounded.  He is humiliated because in failing to train his body and character like Putin, President Obama has made Hannity – and this country -vulnerable.  Although this is an important ethical moment for anyone who understands what the philosopher Emmanuel Levinas means by “ethics” (Levinas characterizes the ethical relation to the other in terms of vulnerability), perhaps it has a different meaning when it is on the political stage.  Levinas understood the political to be a realm where war is the ultimate reality test.  As he says in the preface to his book Totality and Infinity, “the trial by force is the test of the real.”  Even for Levinas, Hobbes seems to speak loudest in the realm that troubles Hannity most (the political realm) since Hobbes insisted that in politics, as in life, there is a war of all against all.  And war, as has been understood for centuries, is about sheer masculinity.

Hannity’s juxtaposition of images of masculinity is read within this context.

One thought on “A Political-Schlemiel-Crisis: Obama as Man-Child Versus Putin as Real Man, or Sean Hannity’s Humiliation Over President Obama’s Masculinity”