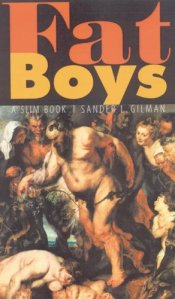 In an essay called “The Mouse than Never Roars: Jewish Masculinity in American Television,” Maurice Berger uses Jack Benny as one of a few illustrations of how the Jewish body appeared in the American public eye.  Calling him a schlemiel, Berger notes that Benny’s body and gestures appear effeminate and that Jews, initially, played on these stereotypes of the Jewish body to gain public attention.  However, as Berger notes, this changes over time as we see more and more masculine Jewish men on TV in the 60s and 70s.   The images Berger uses to illustrate these changes show us, on the one hand, a thin Jack Benny; and, on the other, more muscular and weighty characters in a variety of shows right up to the 1990s.  But this visual-genealogy of Jewish body images is by no means linear or definitive.  The Jewish body – in all its shapes and sizes – remains.

To be sure, we see many Jewish bodies in film and TV – over the last few decades – that are not masculine; such as the bodies of Woody Allen, Ben Stiller, and Larry David (to name only a few Jews who have less-masculine kinds of Jewish bodies in film).  And most of these bodies are thin.  They are not overweight. And if we look back, we can also find heavy schlemiel characters that differ greatly from the thin Jack Benny; for instance, schlemiels portrayed by Zero Mostel.

And lately we have seen something of a physical turn with characters like John Goodman, Seth Rogen, and Jonah Hill.  These characters show us that schlemiels need not be thin; they can also be overweight or heavy.   To be sure, their weight makes them more charming.  And, as we see with many schlemiels (whether in literature, film, or television), his/her charm has to do with the schlemiel’s body, its gestures, and its demeanor. 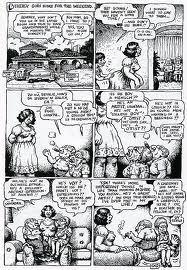 In designing the main character for Absurdistan, it seems Shteyngart was acutely aware of this charm.  We see this in the opening lines of the first chapter where Misha, the main character, introduces himself:

I am Misha Borisovich Vainberg, age thirty, a grossly overweight man with small, deeply blue set eyes, a pretty, a pretty Jewish beak that brings to mind the most distinguished breed of parrot, and lips so delicate you would want to wipe them with the naked back of your hand. (3)

Here we see the Jewish body foregrounded.  We also see it in Shteyngart’s first novel.  But over there the focus is more on the main character’s “Jewish” hips and his Jewish “walk” (both pointed out by the main character’s Russian mother).  Here it is the nose (the “Jewish beak”); but in addition to this Misha also sees himself in terms of his weight.  To be sure, his weight is a topic of interest throughout the novel and, in Misha’s eyes, it (and not simply his Jewish features) makes him “the odd one out.”

But there is more to the story. His weight should also be read against the background of his affluence.  To be sure, Misha comes from a very wealthy family and his weight may be an expression of his wealth.  And how we view this wealth, his approach to himself, and to the world he lives – which could be unduly harsh – should be counterbalanced by his weight.  Indeed, his weight – and not his nose – brings out the schlemiel’s charm; and because of this, his weight (and his attitude toward it) becomes one of the main signs of his schlemielkeit. Reading the text against his body can yield some interesting insights.

First of all, in yesterday’s blog entry I pointed out how Misha – in the Prologue – sees Absurdistan as a book about “too much love” and about “being had.”  Read against his representations of his body – in the first chapter – these passages become more endearing.  He is a person who, we can imagine, may be self-conscious by virtue of his weight; given this supposition, his love and bad luck take on another shade. In addition, because Misha’s Jewishness is an issue in the Prologue, we can now see that his Jewishness is also altered by virtue of his weight.

To be sure, there are many folkloric images of heavy people.  They are at the core of this or that folk culture: they often signify joviality and life itself. In the prologue, he notes how he is “writing from” the land of “Mountain Jews” and he conjures up folk images by saying that the community is “pre-historic” (he even likens the community to a dinosaur – a large creature – and calls it, playing on the Jewish name, Haim and the word Heim in Yiddish (which means home), a Haimosaurus).

In a folkloric sense, this village full of diverse kinds of people who surround him and look to help him.  In fact, in a folkloric sense, he comically notes that they are “too hospitable.”  And when we realize that he is a heavy person (from the beginning of the first chapter) who is in need of help, which we see at the outset of the novel (the prologue), Misha’s schlemiel character takes on folkloric proportions. However, the first chapter (as opposed to the Prologue) is not located in a folkloric space; it’s located in the post-modern, post-communist, and globalized space of St. Petersburg.  And after making his “bodily” introduction, we are introduced to this post-city (which has nothing pre-historic or folkloric about it at all):

By the year 2001, our St. Lennisburg has taken on the appearance of a phantasmagoric third-world city, our neoclassical buildings sinking into the crap-choked canals, bizarre peasant huts fashioned out of corrugated metal and…worst of all, our intelligent, depressive citizenry has been replaced by a new race of mutants dressed in studied imitation of the West, young women in Lycra…men in fake black Calvin Klein jeans hanging limply around their caved-in asses. (3)

As you can see, this is not the world of folklore that Misha is describing.  And his way of speaking demonstrates – in contrast to much of the prologue – that he is an intelligent, observant person.  However, as the introduction goes on, we notice that his intelligence is also tainted by affluence and the very culture he can’t stand:

The good news is that when you’re an incorrigible fatso like me – 325 points at last count – and the son of the 1,238th richest man in Russia – all of St. Lenninsburg rushes to service you….You are blessed with the rarest treasure to be found in this mineral-rich land.  You are blessed with respect. (3)

In other words, he has a love/hate relationship with the city he was raised in.  He is spoiled by it and his schlemielkeit may also have to do with his affluence.  By being served like a prince and gaining weight, he becomes foolish.  However, at the same time, we see from the Prologue that his weight also has a folklorish aspect (which can be situated in an odd, Jewish context).    The contrast between these two spaces is brought about by way of how his body is situated.    His body seems to fit into both spaces, but, as I have shown, its meaning differs considerably. As I continue reflecting on the novel, I will –from time to time – come back to his (Jewish) body and its relation to his schlemielkeit.   The novelty of this reflection is that it looks to show how important the body and its odd relationship to the world are to schlemiel comedy in general and to this novel in particular.