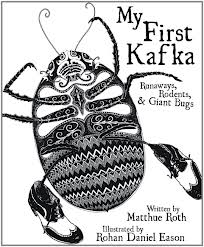 “Kafka for Kids: Matthue Roth’s My First Kafka and Challenges of Representation” by Hillel Broder

Matthue Roth’s fancifully illustrated and elegant, poetic adaptation of three of Kafka’s short works , My First Kafka, was released this month, and to a series of high-profile and sweepingly positive reviews, receptions, and readings. Most recently, bits from Roth’s work were read on the BBC the morning of June 25, 2013 as part of a feature piece on the disturbing and uncanny elements generic to children’s literature. Likewise, The New Yorker’s book blog Page Turner offered a brief but flattering review on June 19, 2013; in it, Kelsey Osgood employed Roth’s work as a site to similarly interrogate the dark complexity of children’s literature in general and the comfort with which children negotiate the uncanny elements of their early lives a la Freud and Sendak. While characterizing Roth’s adaptation as paradigmatic of the genre, Osgood distinguishes  Roth’s pithy verse as “smooth”, “naturally eerie and imaginative”, and even Seussian; he sees the work’s accompanying black-and-white illustrations (by the very talented Rohan Daniel Eason) as a “cross between Edward Gorey and a dichromatic ‘Yellow Submarine’”.

As a father of young children, high school teacher of literature, and doctoral student of literary modernism, I wondered, too, about Kafka’s relevance to and reception by younger minds. Having read Roth’s book myself this past spring to both my own four-year-old son as part of his bedtime routine and to my sixteen-year-old students as part of their unit on Kafka’s original work, I was surprised by the various receptions and responses. Child and adolescent alike took great pleasure in the absurd premise of the work, as they were likewise sympathetic for Gregor Samsa’s alienating plight and bothered by Gregor’s father’s cruelty.

What’s most interesting, however, were the different registers in reading—the sorts of questions related to representation and even morality that children come to expect when reading, more generally, but which are foiled—or at least complicated—by Kafka’s work.

I’ll start with the following, perhaps disputable assertion. Kafka’s work is quite accessible to even the most challenged readers and critical thinkers, and here’s why: first and foremost, it is a work that demands to be taken literally, and so superficially, it is a simple tale that is tragic, comic, and direct in its telling. For a four-year old who believes, instinctively, in the magic of fairy tales, this isn’t much of a mental hurdle. But for students who have been taught, year after year, to read fiction for its symbolic richness, figurative language character development, plot conflict, and various other familiar forms, The Metamorphosis can be off-putting.

In fact, Kafka’s work is most challenging in the figurative register because it, on no uncertain terms, literalizes what students have been trained to recognize as a metaphor. Generally speaking, high school students’ first reactions to the work—either following a first read or having heard of the work from others—immediately move to the symbolic realm: the “monstrous vermin” into which Gregor Samsa has transformed seems to carry with it a tremendous amount of cultural baggage (and indeed, the German ungezeifer was later used by Hitler to depict the verminous Jew)—and so such a transformation must be a dream, a self-image, a self-inflicted punishment, or some other symbolic means to depict the abject (perhaps the Czech, the Jew, the newly Secular). And ethically speaking, to a certain degree this is a kind and compassionate reading—students have been taught to recognize and redeem, to the best of their ability, the downtrodden.

And yet, Kafka’s work plays on the surface, as it were: it demands that we read a tale, from the very start, about an already-transformed Gregor, his alienation within his own home, his general neglect by his own family, and his final demise through festering wounds triggered by miscommunications and reactions of violence. It is a fantasy made reality of an industrious worker who is at once enslaved by providing for his family but retains his family’s disabled state through their complacent irrelevance. In turn, through his abjection, the family transforms into an industrious and productive unit. Indeed, the true transformation (Kafka’s German title Die Verwandlung is closer to “transformation” than  “metamorphosis”) is enjoyed by Gregor’s family as they flourish in his absence.

In this regard, Roth’s telling of the story does a fantastic job retaining Kafka’s rich literality, while amplifying some of the empathic elements that might be most evocative to children. Roth’s first stanza incorporates the nonchalant shock of Kafka’s original—“As Gregor Samsa awoke one morning from uneasy dreams, he found himself transformed in his bed into a gigantic insect-like creature”, but with a slight preface:

Here, Roth allows the child to know—and the adult to recognize—that Gregor’s disturbance precedes his transformation; that we should pity Gregor, too, goes unsaid, but is very much a significant sentiment in Roth’s iteration of the character that extends through Gregor’s final moments in part three in which he euphemistically passes as “his head sank down /and he watched the dawn.”

A distinguished slam poet, memoirist, and fiction writer  in his own right, Roth’s precise use of line break and stanza break and deep sensitivity to metered verse informs the pacing of such a reading as much as it influences the reader’s organization of meaning. The first line cited above is neatly trochaic, almost Poe-like; the final two aforementioned perform as elegant Iambs.

And yet. Despite the work’s literal ease—and the way in which such an aesthetic is enhanced by Roth’s elegant lines and Eason’s illustrations–Kafka himself demanded, in a  1916 letter to the Kurt Wolff Publishing Company, that his literalized metaphor never be illustrated on the book’s cover or otherwise: “…The insect itself cannot be drawn. It cannot even be shown at a distance.” Perhaps there’s some insistence here of the sacrosanct Word—from a post-structuralist point of view, it would be heretical to depict a signifier as anything other than other signifiers; from a theological perspective, making an image of the holy Word would be to make a fixed fetish out of the dynamic Becoming of God.

Regardless, here’s where the really complicated twist lies: while Kafka’s work demands to be read literally and nearly without a moral—almost as a sequence of events, without fully developed characters, and without a clear conflict and climax—it also resists the clarity that might accompany such literality. This is manifest in both the linguistic and visual registers.

Visually, not only must the vermin never be illustrated, for Kafka, but it is clear that the vermin is not obviously classified. The word itself—Ungeziefer—translates colloquially as vermin, bug, or insect, but means in formal German “unfit for sacrifice”. While many render Gregor’s creature-self as an ambiguously roach-like figure (R. Crumb’s visual rendition of Gregor in his Introducing Kafka approximates that of a giant roach; Peter Kuper’s surreal and complete graphic novel The Metamorphosis likewise maintains a human head, though on a roach’s body), Nabokov famously rejected such a possibility given the creature’s capacity to turn its head and its short legs. Instead, he suggests, on zoological grounds, that Gregor approximates a beetle. For the experimental reader but textual purist, the Metamorphosis Ipad app, illustrated and designed by Joel Golombeck of Rocket Chair Media, retains the dynamic movement of Kafka’s text through focused, paneled reading, even as it offers an abstract, watercolor illustrations, which illuminate, but not depict, the text and its characters. In Roth’s edition, however, Eason’s illustrations of Gregor attempt a balance that is at once psychedelic and concrete: elaborate designs that seem to shift over the course of the work and mimic butterfly wings, peacock feathers, and what seems like Rorschach Ink blots adorn Gregor’s definitive beetle shell. Such designs constellate new faces on Gregor’s creaturely body and seem to suggest the opacity of Gregor’s undefinable image—or at least as one that contains the possibility for many.

Textually, Roth’s writing reads easily to a four year old, but Roth retains Kafka’s ambivalent and indeterminate narrating voice. It is in the narrating voice in Kafka’s text, I suggest, through which the reader of this masterwork apprehends his or her own uncertainty about the “moral of the story” or a proper empathic reaction to the characters’ tragedies. On the one hand, both Kafka’s and Roth’s narrating voice seems to possess a privileged perspective into Gregor’s mind alone; we learn, for example, that “Gregor realized that nobody understood him” and that when “he could no longer move / at all”, “it was a nice feeling.” On the other hand, this third person narrator retains a certain distance that forbids the reader certain guidance regarding how he/she could—or should—react. Kafka does this magnificently well, and Roth retains this distance in his pithy prose poem. Take, as a lucid example, three of the six final stanzas of the work:

In the morning / they discovered / that Gregor could not move.

Here, what goes unsaid breathes between the lines of Roth’s careful verse. Gregor’s immobility displaces the non-event of his passing, and Gregor’s family is content to literally sweep his dead carcass under the rug, with only a single but casual query of what seems an unconcerned sister. The final stanza depicting their subsequent departure screams of injustice as they celebrate their triad (threes, in Kafka’s work, are everywhere—and seem to indicate an impenetrable structure to which Gregor is the abject fourth).

Walter Benjamin famously wrote that Kafka “could grasp some things always only in gesture. And this gesture, which he did not understand, forms the cloudy spot of his parables.” Here, the gesture is that which, within Kafka’s parabolic language, resists an easy movement of meaning making. Put even better, Werner Hamacher writes the following about Benjamin’s reading of Kafka:

In the text of the parable, the cloudy spot about which Benjamin speaks is the

dark moment that remains opaque to doctrine. The cloud does not present doctrine but rather conceals it. At best, it distorts doctrine and disavows the task of exemplary, instructive narrative: to make one aware of its moral without delay and without obfuscation.

Thus, the challenge of reading, teaching, translating and adapting Kafka (even for children) is retaining both its parabolic sense—its sense that it demands a symbolic or even moralistic reading—and its resistance to being read in any other way but literally. In turn, a literal rendition of Kafka’s work must retain this very opacity—this cloudy spot or gesture—that continues to keep Kafka’s work alive through its very impenetrability. Roth’s work, in this regard, is a welcome addition to the long tradition of retelling Kafka’s Metamorphosis: it is elegant and accessible in its understated and literal tone, and it challenges the reader with the very same textual and visual impasses evoked by Kafka’s original. What Roth knows is that children luxuriate in the literal—in all of its complexity and irrationality, and the sensibility of the Schliemel, too (as has been explored in these very pages), retains this tension of the relationally textual—and playful—surface.

Hillel Broder is a doctoral student of English at the CUNY Graduate Center–where he specializes in twentieth-century modernism and cognitive cultural studies–and a high school teacher of English at SAR High School in Riverdale, NY.  This is his second guest post for Schlemiel-in-Theory.  His first was on Walter Benjamin, Franz Kafka and Gesture.