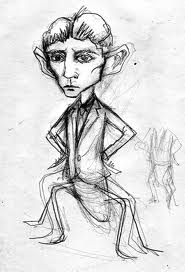 When I first read Paul Auster’s “Pages for Kafka,” I was struck by the fact that, although he mentioned Kafka’s name in his title, he didn’t make any reference to Kafka’s name throughout the piece.  Instead, Auster refers to “he” and “him” repeatedly.

Here is one instance, which I cited in my last blog entry:

He is never going anywhere.  And yet he is always going.  Invisible to himself, he gives himself up to the drift of his own body, as if he could follow the trail of what refuses to lead him.

And then it occurred to me that the reason Auster was obsessed with “him” had a lot to do with an author and thinker he has, without a doubt, read: the celebrated French literary critic and thinker, Maurice Blanchot.  (I say, ‘without a doubt’ because Auster translated two of Maurice Blanchot’s novellas under the title Vicious Circles and he married Lydia Davis, a writer and well-known translator of Blanchot, the same year he wrote “Pages for Kafka.”)

Blanchot has written a few significant essays on Kafka.  But of all these essays, only one came to mind when thinking about Auster’s obsessive reference to ‘him’; namely, the essay entitled “Essential Solitude” (which appears in the Lydia Davis collection on Kafka).

In Blanchot’s essay, Kafka is mentioned in relation to what Blanchot calls the “interminable, the incessant” which he relates to the word, “he”:

Writing is the interminable, the incessant. The writer, it is said, gives up saying “I.”  Kafka remarks, with surprise, with enchantment, that he has entered into literature as soon as he can substitute “He” for “I.”

In the wake of this citation, Blanchot becomes what Harold Bloom would call a “strong poet.”  He does this by slightly revising what Kafka understands by this movement from the “I” to “He.”

This is true, but the transformation is much more profound.  The writer belongs to a language which no one speaks, which is addressed to no one, which has no center, and which reveals nothing.  He may believe that he affirms himself in this language, but what he affirms is altogether deprived of self.

In other words, Kafka, according to Blanchot, was so to speak blinded by the light of his “surprising” discovery.  Kafka thought he was discovering himself in “Him” when, in fact, he was literally discovering something altogether impersonal.

The more Blanchot talks about “Him,” the more Kafka comes across as a dupe who believes that language can help a writer to come to him or herself by stripping him or herself of his or her “I.”

In contrast to Kafka, writing, for Blanchot, is a way of making oneself into an “echo” by letting that which “cannot cease speaking”… speak.

To write is to make oneself the echo of what cannot cease speaking….I bring to this incessant speech the decisiveness, the authority of my own silence.  I make perceptible, by my silent mediation, the uninterrupted affirmation, the giant murmuring upon which language opens and thus becomes image, becomes imaginary, becomes a speaking depth, an indistinct plentitude which is empty.

In lines like these, one hears Martin Heidegger’s claim, in his essays on language, that “language speaks.”  One also hears what Blanchot will later call “the infinite conversation.”  Here, the “I” doesn’t speak.  He, the other, does.  But the I, the writer doesn’t totally dissolve.  Rather, he still “keeps the cutting edge, the violent swiftness of active time, of the instant.”

In other words, the I only has the instant, the “cutting edge,” which makes room for language to speak and “become image.”  What Blanchot means by language is something very serious.  There is no discovery and there is nothing humorous here.  The experience of language, in fact, denotes more or less what Levinas would call, in his earlier essays, an exposure to the il y a (the anonymous and terrifying “there is” of existence).

This movement reminds me of Heidegger’s experience of the “nihilation of the Nothing” in his essay “What is Metaphysics.”  After articulating the experience of such nihiliation, Heidegger notes, with an ellipsis (…) that “one feels ill at ease.”  Not me but “someone.”

But this is not the Nothing, it is, for Blanchot, the il y a, the endless “there is.”  Which he calls “the outside.”  To be sure, in this moment of otherness, the outside is with “me.” And it is one’s “intimacy” with the outside that creates restlessness and what Blanchot calls “fascination.”  Although Heidegger also writes on fascination in the second chapter of Being and Time and even though, as Christopher Fynsk argues in Heidegger: Thought and Historicity that this “fascination” is with Dasein’s “originary disappropriation,” Blanchot leaves Heidegger further behind with his new reading of fascination.  But, perhaps without knowing it, Blanchot returns back to Kafka.

Blanchot notes that fascination deals, specifically, with vision.  It “seizes sight and renders it interminable.” But this makes for a kind of light that is not simply terrifying; rather, “one sinks into” a light that is “both terrifying and tantalizing.”

Strangely enough, the experience that Blanchot uses to illustrate this is “our childhood”:

If our childhood fascinates us, this happens because childhood is the moment of fascination, is itself fascinated.

Blanchot notes that “perhaps” the “maternal figure” is fascinating because “she concentrates in herself all the powers of enchantment.”  But it is only “because the child is fascinated that the mother is fascinating.” And in this fascination there is a misperception: “Whoever is fascinated doesn’t see, properly speaking, what he sees. Rather, it touches him in an immediate proximity.” And what touches the child is “the immense, faceless Someone.”

This suggests that writers are fascinated with the same things children are fascinated.  In effect, writers are men-children.  They are, in some ways, like schlemiels in the sense that they are without a world yet…in touch with “the thing become image again.”

Auster’s reference to Kafka in his “Pages for Kafka” as “him” and “he” is an attempt to bring out this childishness.  And, although it is serious, it is laughable.  His Kafka wanders toward a Paradise but gets distracted with things he sees along the way.  He sees what is close to him.  He looks down at his feet, walks oddly, and wanders all over.  However, he is on the road.  And this road is a road to paradise.  As I noted in the previous blog, Auster recognizes that this is foolish, but he affirms it anyway.  In other words, he, like Blanchot, affirms fascination. But Auster notes its comical aspect while Blanchot gets caught up in the childlike fascination of the child which, for some reason, he doesn’t see as comical.

But is the “he” Auster refers to a schlemiel?

While writers like Sholem Aleichem or I.B. Singer put forth Schlemiels who are blind to the world and are, nonetheless, in touch with “things,” we know that they are schlemiels.  True, they are laughable because they can’t relate to the world.  Yet, on the other hand, the world is at fault for being… a world in which innocence and trust have no place.  And this turns readers against the world, not the schlemiel.

Nonetheless, Motl, Menachem Mendl, and Gimpel are all, as Auster says of Kafka, on the road to Paradise.  But, for Blanchot, fascination won’t lead one to Paradise so much as toward “that which is when there is no more world, when there is no world yet.”  But, if that is true, then what of other people?  Aren’t they a part of the world? Aren’t Gimpel, Menachem Mendl, and Motl constantly moving towards people? And even though they may miss meeting up with them in the world, they, at the very least, try.  Although the world is in conflict with the schlemiel, we the readers would ultimately like the world to one day be in tune with this comic character’s goodness.  And that is the point.  Childhood fascination and absent mindedness are not the true ends of the schlemiel tale – a shared world of goodness is.

Given this understanding, I wonder what Auster or Blanchot would say to Paul Celan’s proposal in his prose piece “Conversation in the Mountains” – a story that parallels Auster’s story of the fool on the road.   In Celan’s story, however, there are, apparently, two people are on the road, not one.  And it is the dialogue between them that Celan stages.  This back-and-forth rhythm of conversation enunciates a kind of Jewishness that is singular and unique.  In this conversation we don’t see childish characters who are simply or only interested in things.  They also speak to each other.  They seek out a relationship to the world which, no matter how absent minded it is, is real.

Without this added element, it seems as if Blanchot and Auster move “him” toward a fascinating world that is fit for a child who has no friends save in things.  This man-child, in his “essential solitude,” would only have Someone (him) as a companion.   Someone who he lets speak.   Language alone doesn’t speak.  People do.

After all, no matter how lonely Kafka seemed, he ironically noted, in his Octavio Notebooks, that Don Quixote’s biggest problem was not his imagination; it was Sancho Panza.  It was the other person.  But these are the problems that Kafka, in a Yiddish way, kvetched about but loved.  Sancho Panza, like all friends, has a proper name.

Perhaps friends are less fascinating than things.  But, at the very least, we don’t “wander” on that road alone.  We have “someone” to share the journey with (regardless of how blind).  And this is what we find in Cervantes’ Don Quixote and in the Jewish Don Quixote: Mendel Mocher Sforim’s Benjamin the Third.  Schlemiels try not to travel alone.  Their otherness is shared and Someone is always ‘there’….