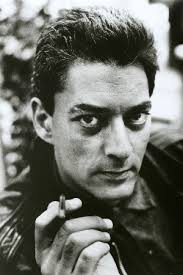 After reading and posting Matthue Roth’s guest post yesterday, I reflected on how seriously many writers, literary critics, and philosophers took Kafka.  I find it interesting that few can sense the irony and humor in his work. What they usually find is weight and despondency.  What I’m looking for in Kafka is much different.

The comic aspect of Kafka’s work may be found in the close attention to detail. One may not think this comic; but for Shalom Aleichem, Motl or Menachem Mendl’s attention to detail is the basis for their constant distraction.  The same can be said for Charlie Chaplin or any of the Three Stooges.

Like children, they forget what they are supposed to do and get caught in something else.  They don’t get caught up in the depths or with the seriousness of the sacred.  They play.

And this is what Matthue was pointing out in his post.  To be sure, his book My First Kafka: Runaways, Rodents, and Giant Bugs is for kids.  It is replete with accessible phrasing and illustrations to capture the imagination of children and adults (or man-children).

As I pointed out in my reading of Kafka’s “Temple” aphorism, the childish scribbles on the temple remain.  They are on the surface of the temple and reduce its depth.  Yet, at the same time, the children’s scribbles have made a serious joke out of the temple.

The trick, in Kafka, is to figure out how to retrain the tension between the serious and the comic.  By doing this, the reader will not get stumped in the seriousness of his or her solitude and despondence.

On this note, I recently read Paul Auster’s “Pages for Kafka” with great interest. The piece, written in 1974 (and published in The Art of Hunger), is an indication of how seriously one can take Kafka.  The short piece was written, like Walter Benjamin’s piece on Kafka, for the anniversary of Kafka’s death.  Due to the occasion, one would expect it, to some extent, to be serious and mournful.  Moreover, Auster is not known for writing comic novels.

On the one hand, Auster’s reading reflects an acute sense of despair that is based on a journey that never goes anywhere.  On the other hand, it has a comic ring to it since ‘he’ (that is, Kafka) is constantly getting distracted.  Even though the failures Auster enumerates in this piece seem to tilt the balance toward a serious and mournful approach to Kafka, they are ultimately based on Kafka’s ridiculous and impossible endeavor.

Auster begins his piece by describing Kafka’s main endeavor (which we find in the Octavio Notebooks or in a piece like “Before the Law”): “He wanders toward paradise.”

This wandering is endemic for Auster.  He meditates on it in the whole piece and relates it to one of his favorite themes (in many of his books): the travelogue.

Auster notes that Kafka “moves from one place to another, and dreams of stopping”(23).   But he can’t stop because this “desire to stop” haunts him. This makes no sense.  How could a desire to do something keep one from doing it?  Isn’t he haunted, rather, by the goal, paradise?  Auster explains by simply reiterating: “He wanders.  That is to say: without the slightest hope of ever going anywhere.”

If that is the case, then why is he still walking?  And what would a schlemiel be if he had no hope of going anywhere?  Gimpel, for instance, is the embodiment of hope.  That’s why he continually trusts people while being betrayed by them.   And, as we learn at the end of Singer’s tale, he keeps on wandering.

I’d like to suggest that we read Auster against Kafka (or “him”).  The narrator is making his skeptical observations of “him” – the fool on the road to paradise named Kafka.  By reading Auster this way, we can see just how comic this piece really is.

For the narrator, the central paradox can be found in Kafka’s inertia and its relationship to wandering: “He is never going anywhere.  And yet he is always going.”  The reason for this, says Auster, has to do with the fact that Kafka is “invisible to himself.”  Lest we not forget, this is one of the most important aspects of the schlemiel.  S/he doesn’t know what s/he is doing.  Although they are hopeful, his/her actions don’t fit with reality.  Auster tells us that, in being invisible  to himself, Kafka “gives himself up to the drift of his body, as if he could follow the trail of what refuses him.”

In other words, Auster is willing to concede that Kafka, like Don Quixote, is a blind wanderer.  Even though he doesn’t know where he is going and is blind to it, his “blindness…invents the road he has taken.”  This invention is not “intentional”; it is, rather, based on giving in to what Kafka, in his Octavio Notebooks, called the “indestructible.”  Because he is a skeptical narrator, Auster won’t call it faith or passion.  Rather, for Auster, it is a surrender to “the drift of his body.”    And we can have no doubt that this can be comical and even inspiring – although it is “misguided” and although we “know” he’ll never reach paradise.

Here Auster notes the “existential” nature of this “road.”  Even though it is misguided, it is “his road, his alone.”  And the further along he goes on it, the more he “doubts.”  His breaths become “fitful.”   No one “rhythm” or “pace” can be held because of this ever-increasing doubt.  The image is kind of like Chaplin’s going down a road, but with a difference.  This movement is more fitful and less graceful.

Auster adds another element to Kafka’s walk; namely, his past and his point of departure.  Auster notes, with melancholy, that he leaves it behind and thinks he has a vantage point, but he doesn’t.

His only “law” is that “he remains.” And instead of looking to the future, Auster tells us that he looks down:

All this conspires against him, so that each moment, even as he continues on his way, he feels he must turn his eyes from the distance that lies before him, like a lure, to the movement of his feet, appearing and disappearing below him (24).

In other words, the fool will look at what’s near him and get caught up in it.  That’s where he foolishly “remains.”  He’s caught up in the details and, as Auster puts it, he becomes an “intimate of all that is near.”

But unlike the playful Motl or Menachem Mendl of Shalom Aleichem, he gets too caught up in detail and this attachment weakens “him”:

Whatever he can touch, he lingers over, examines, describes with a patience that at each moment exhausts him, overwhelms him, so that even as he goes on, he calls this going into question, and questions each step he is about to take (25).

This is the Kafka-schlemiel trap.  He can’t move because he is too attached to what is near him.  He gets caught up in it and questions about where to go after he has encountered this or that detail.  Auster sums this up with an adage of sorts: “He who lives for an encounter with the unseen becomes an instrument of the seen.”  He becomes a “spokesman of its surfaces.” But that is not what “he” wants.  He wants to go to paradise but, Auster tells us, Kafka gets caught up on the way with the road.  In other words, he’s a schlemiel like Mendl Mocher Sforim’s schlemiels The Wanderings of Benjamin III who can’t arrive at their destination.

After noting “his” being stuck on the surface, Auster repeats the message: “He wanders.”  And then he states Kafka’s other law.  He doesn’t simply remain “where he is” he also has an ethos:

This is Auster’s law.  It is the law of hunger.  And it keeps him moving and not moving.  It keeps him hungering for fragments.  For, between one shadow or one fragment and another, says Auster, there is light.

What this amounts to is a serious endeavor that clings to and rejects revelation.  Yet, on the other hand, it is a comic endeavor.  But who is “he.”  Kafka? Auster?

In the end, he, whoever he is, is like Sancho Panza following Don Quixote.  The narrator’s description ends with a note of redemption in the sense that he says that between one shadow and another there is light.  But does he think this or does the narrator?

Who would take such a foolish path?  Is the author dreaming of light between this or that thing or is the he, the schlemiel, dreaming this?

A rationalist would reject such a road, but the writer doesn’t.  For Auster, the poet must trust experience even if it is, at times, deceptive.  This is what the schlemiel teaches us. Although we, the readers, may see that paradise is not to be found, the road to experience paves the way (or as Auster says, “invents” the way).  And it brings the world near to us in the most comic fashion.  As the world approaches, Paradise withdraws but the schlemiel insists that the way to paradise is through the world.  And this is the comic conceit.

He actually thinks that in this or that fragment, this or that thing, redemption is near.  While we all “know” its ridiculous, however, we still foolishly follow “him” (like children who should ‘know better’) in his journey   And so does Auster.