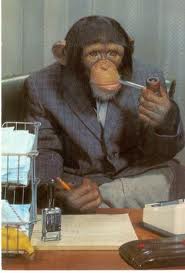 Reading Kafka’s “Report to an Academy” and Shalom Auslander’s “Bobo the Self-Hating Chimp” side by side has prompted me to think more about what we can learn from a writer who uses a hybrid human-chimp as a metaphor for Jewishness. While Kafka’s attempt to do this is troubled by the times he lived in (which thought of the mixing of “races” as a form of “pollution” – and, lest we not forget, Jews were, mistakenly, thought to be members of race), Auslander’s evocation of the Jew as a chimp seems less troubling for us today because we love animals. Even so, for literature to be affective it must (for better of for worse) trouble us. The question, for today’s Jewish and non-Jewish reader of these short stories, is what exactly is troubling and why. What can the frustrations and problems of these Jewish kinds of animals teach Jews about who they are or may be? The main issue that is at stake in both Kafka and Auslander’s stories is the troubling relationship of the modern Jew to his or her Jewish community and history. While their issues differ, they both bring us back to the relationship of the individual to the community and its shared history as a fundamental point of interest for modern Jews.

Sander Gilman, in his book, Franz Kafka: The Jewish Patient, argues that the discourse of mixing man and animal overlapped, in some points and places in Europe, with an anti-Semitic and racist discourse: namely, the fear that Jews would taint the racial “purity” of Germans.   Gilman claims that Kafka was quite aware of this fear and that it influenced his writing. The Jew who converts and intermarries, for the anti-Semite, will end up creating children who are “mishling” (a being who is an admixture of races).   Gilman also claims that, on the completely other end of the spectrum, there was a fear in the Jewish community that by assimilating Jewishness was threatened. Both, for their own reasons, wanted to keep Jewishness distinct.

For the anti-Semite, a Jew will always be a Jew. Nodding to Kafka’s “Metamorphosis,” Gilman argues that “the transformation of the Jewish body” by way of either assimilation, conversion, exercise, or language acquisition, etc was “desirable but inherently impossible. The model for Kafka was that of religious conversion.” And when, in stories like “The Report to the Academy,” the “ape becomes ‘human’, that is, he acquires a human manner of seeing the world with his acquisition of language….he remains marked by a sexual passion for his ‘kind.’(13). The more Kafka’s characters try to change, says Gilman, “the more they reveal themselves as fundamentally defective.”   This, argues Gilman, “reflects both a Jewish and anti-Semitic accusations against Jewish assimilation.”

While, today, writers like Gloria Anzaldua, celebrate the “mixture of races, rather than resulting in an inferior being, provides hybrid progeny, a mutable, more malleable species for the gene pool,” or what she calls, in Spanish, the “mesitza,” the “old world Mishling” (an anti-Semitic term for a Jewish “half breed”) was despised.     What we get in Kafka and Auslander’s story is a sense of the regret and shame at having chosen or having become different from their community. But, while there is a shame or regret, it also discloses how fundamental the dialogue between being a modern person and a member of a Jewish community are for them. And while Auslander sees the community in more resentful terms, Kafka sees it in different terms which evince a desire to embrace it while “escaping” it.

In Kafka’s “The Report to the Academy,” the main character, an ape who has become “human,” speaks to an academy:

You have done me the honor of inviting me to give your Academy an account of the life I formerly led as an ape. (Kafka: The Complete Stories, 250)

Unfortunately, he can’t “comply with your request” to the “extent you desire.” Nonetheless, he does give a revealing account. In his account, the reader can see that he wishes to please his audience by saying that he was, before “escaping,” “stubbornly set on clinging” to his “origins.” He had to “give up being stubborn” was his “supreme commandment,” to which he “submitted himself.”   He lived a “forced career” as a human but “I felt more comfortable in the world of men and fitted it better.” The world of apes, read the world of the Jewish people, made him feel very uncomfortable.   But although he feels comfort amongst humans “a strong wind that blew out after me out of my past.” Over time “it began to slacken.” Now, his (Jewish) past is only a “gentle puff of air.”   And now all he feels is a “tickling of the heels.”

He goes on to recall how he learned different human customs. But he also notes how he was hunted and shot. He recalls his “large, naked red scar,” which earned him the name “Red Peter, a horrible name, utterly inappropriate”(251).   He was also hit in the hip (251).   And, to this day, he tells the Academy, he limps.

He also recalls how he was put in a cage and subdued and yearned to be free. And although he was “hopelessly sobbing, painfully hunting for flees, apathetically licking a coconut, beating my skull against the locker” he was still “amenable to training.” In other words, he acknowledges the pain, but frames it all as a part of a positive process.

The attentive reader can see that what troubles him is that his freedom was forced. He remembers the abuse that drove him away from his people and his very body. However, he acts “as if” that doesn’t matter. He makes a distinction between the desire to escape and embracing (and understanding) freedom. The latter is superior to the former.

No, freedom was not what I wanted. Only a way out; right or left or any direction; I made no other demand; even should the way out prove to be an illusion….To get out somewhere, to get out! (254)

While this desire is deemed lower than freedom, Kafka, in countless other places, discusses the desire to move and leave. It is, in other words, primary for him.   And this desire to move is something that is not associated with society (The Academy) so much as with his past and his people. It is the last remnant of his past.

After describing how he learned to do things like a human being, he goes into a monologue of praising modernity and suggests that by changing his behavior he has grasped the true meaning of freedom:

That progress of mine! How the rays of knowledge penetrated from all sides into my awakening brain! I do not deny it: I found it exhilarating. (258)

But, immediately after saying this, he makes an small confession:

But I must confess: I did not overestimate it, not even then, much less now. With an effort which up till now has never been repeated I managed to reach the cultural level of an average European.   In itself that might be noting to speak of, but it was something insofar as it has helped me out of my cage and opened a special way out for me, the way of humanity. (258)

By saying that he didn’t “overestimate” it, he is telling the academy that his accomplishment is not as great as it seems to himself. There are traces that trouble him; but as the above cited passage shows, even after noting this he still acts “as if” he does think it to be the best thing in the world he ever experienced.

His real confession comes at the end of the text. What troubles him is his sexual partner – “a little chimpanzee” – who he comes home to every night after “performing.”   He may have sex with her at night but, “by day I cannot bear to see her; for she has the insane look of the bewildered half broken animal in her eye; no one else sees it, but I do, and I cannot bear it”(259). What he is saying – in this confession – is that he sees himself in this “bewildered half broken animal” and this makes him feel shame (against Gilman, I’d argue that this is not simply a moment that draws on the anti-Semitic fear of creating a Mischling but an existential experience of what Freud would call the uncanny; the return of the repressed, however, is a return of Jewishness as something shared).

But after saying this he suppresses his emotion and memory and acts as if nothing he said was real: “In any case, I am not appealing for any man’s verdict.”

All he is doing, he says, is “making a report” and “imparting knowledge.”

This movement is telling since it suggests that, if in looking at the “bewildered half broken animal” Kafka is giving the modern condition of Jewishness a figure, Jewishness is based on an acknowledgement and a denial that one is European, French, American, German, etc and living the life of an Enlightened (and “free”) individual. What he knows, as a Jew, is something that the academy will never know. He has this knowledge because he is a Jew who was torn away from his people. He has the wounds of this rupture and the memories that go along with it – which he must deny if he is to be ” free” – but they all come back to him when he sees one of his own kind.  He remembers that he is not truly free and, before her and the memory she evokes, he can’t move or escape.  Like many of Kafka’s characters, he wants to move but can’t.   And, if we read Kafka by way of Jewishness, it is his betrayal of Jewishness which stops him in his tracks.

The shame of this character and his memory of being torn away from his people – who appear to be “bewildered and half broken”- finds a different kind of figuration in Shalom Auslander’s story. But, even so, the shame comes in relation to the community.   The difference, as I will argue in the second part of this essay, has to do with Auslander’s explicit reference to religious ideas and a kind of shame that separates Bobo from his fellow species.  And this suggests a different kind of education, one less cultural (The Academy) and one that is more religious.