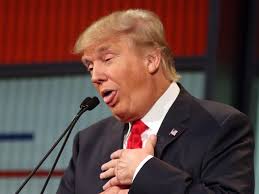 Last week, Donald Trump’s use of the Yiddish word “schlong” prompted countless articles and news pieces on the meaning of the word.   The Washington Post put out several interesting and even comical articles on the topic. On December 22, three pieces were published. Philip Bump of The Washington Post exclaimed that Trump “ruined Christmas” since there were more Google searches for the word “schlong” than there were for words like “stocking,” “tinsel,” or “gift wrap.”   And Dana Milbank, playing on this wave of discussion, wrote an opinion piece entitled “Oy Vey! Enough of Trump.” In the article, he employs a bevy of Yiddish slang terms to express his opinion of Trump, Lindsay Graham, and the Republican political field.   Like many editorialists, he sees Trump as a clown who must be challenged by a more serious candidate.

But of the three articles written on the word, Justin Moyer’s “Donald Trump’s ‘schlonged’: A linguistic investigation,” was the most informative.   Moyer cites an email to The Washington Post by Harvard linguist Steven Pinker which clears everything up:

Many goyim are confused by the large number of Yiddish terms beginning with ‘schl’ or ‘schm’ (schlemiel, schlemazzle, schmeggegge, schlub, schlock, schlep, schmutz, schnook), and use them incorrectly or interchangeably,” he wrote. “And headline writers often ransack the language for onomatopoeic synonyms for ‘defeat’ such as drub, whomp, thump, wallop, whack, trounce, clobber, smash, trample, and Obama’s own favorite, shellac (which in fact sounds a bit like schlong). So an alternative explanation is that Trump reached for what he thought was a Yinglish word for ‘beat’ and inadvertently coined an obscene one.

In other words, Trump seemingly created a word mixing English and Yiddish (“Yinglish”) which turned a noun (“schlong”) into a verb.  Moyer notes a few other uses of the noun as a verb. And citing the Oxford University Press blog essay, entitled “Do you Salad or Sandwich? The Verbing of English,” he notes how the transformation of nouns into verbs is not atypical.

“This conversion of nouns to verbs is known as ‘verbing’ and it has been around for as long as the English language itself,” Oxford University Press noted in 2013. “Ancient verbs such as rain and thunder and more recent conversions such as access, chair, debut, highlight and impact were all originally used only as nouns before they became verbs.”

Perhaps anticipating Trump’s use of “schlonged,” the Press also noted: “Verbing exists essentially to make what we say shorter and snappier. It can also give a more dynamic sense to ideas.”

With all of this talk about nouns being transformed into verbs, I wonder whether a schlemiel can be “verbed.” In other words, can a person be schlemieled?

To be schlemieled would suggest that through this or that act or circumstance, one can become a schlemiel.   While this may work with a shlimazel, who is the subject of bad luck, it may not be possible for the schlemiel.

For Wisse, the schlemiel’s comedic way of being is existential in the sense of being ontological: one can’t become a schlemiel (by virtue of this or that comedic situation); one is a schlemiel.  And if the schlemiel were to be “verbed” in Yinglish, it would suggest something contrary to her definition. Nonetheless, this wouldn’t keep Trump or anyone in the political field from calling another candidate a schlemiel and using the term as an insult.

Regardless of how it is used, we should keep in mind that while the schlemiel has historically been in two extremely divergent ways.   It has been used by some as an insult, but it has also been used in ways that are endearing and even moral.   (See for instance, the use of the schlemiel by writers like Sholem Aleichem or I.B. Singer or the depiction of the schlemiel in the majority of films by Woody Allen, Judd Apatow, or Seth Rogen; alternatively, a thinker like Hannah Arendt has used both kinds of meanings or the battle between cultural and political Zionists over the meaning and use of this term.) But since our culture is more apt to the insult and because this is the political season, this other definition will most likely be overlooked.   Who knows? Perhaps the schlemiel will make the news. And if it does, Schlemiel Theory will be there.

I’ll end with Larry David’s portrayal of Bernie Sanders as a schlemiel.  This performance, however, is not meant to be an insult.  It’s endearing and funny.