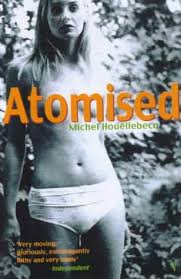 I love seeing new faces whether they are real or, as in reading a novel, virtual. What interests me most – in both reading faces and reading literature – is when glances are exchanged. When someone or something looks at you how do you look back? And what happens when the person you’re looking at, as in a dream, seems a lot like you and yet a lot different?  Do you confront the gaze or do you walk away in fear?

Reading Michel Houellebeq’s Elementary Particles, I feel as if the book is looking back at me like a strange animal. I partially identify with this or that aspect of the two main characters Bruno (a middle aged retired French literature teacher) and Michel, his brother (a middle aged microbiologist). The two characters are so different from each other and from me.   However, there are things that I identify with such as: the crisis of identity that comes with growing older, with the aging body, with the changing attitudes toward sexuality, and with the meaning of life in the face of death and decay.

Although there are many points of identification, Houellebecq prompts his reader to draw the line with sexuality and perversion. This technique creates a complicated identification with the character which echoes, in many ways, what we see in Dostoevsky’s Crime and Punishment.   I contend that we draw the line through reading the text in a way that at one and the same emphathizes with the character and is repulsed by it.

Houllebecq is a lot like Charles Baudelaire, who, in 1848 wrote in his journal that “when I have inspired universal horror and disgust (through poetry and fiction), I will have conquered solitude.”     By experiencing disgust at Bruno’s sexual frustration and desperation, Houllebecq is not simply “conquering solitude,” he is also creating solitude for his reader since, by moving away from the character, the reader has a deeper sense of difference and solitude.  He or she becomes – like an elementary particle – atomized.

For this reason, Houellebecq explicitly notes how Bruno, who is looking to have sex with younger women, is surrounded – in the refuge for those in search of enlightenment and sex, the Lieu du Changement – by other 40 year olds. This frustrates him to no end because it painfully reminds him that he is alone and desperate like the others. They have too much in common!

Many of the people who went to the Lieu du Changement were, like Bruno, over forty, and many, also like him, worked in the public sector or in education and were safeguarded from poverty by their status as civil servants.   Most of them would have put themselves on the political left; most of them lived alone, usually as the result of divorce. He was, therefore, a pretty typical visitor.   (106)

The narrator tells us that he was so frustrated with actually meeting a younger woman and having sex with her (after all, he is, as I noted elsewhere, a pervert) that he gives up on his fantasies and accepts these older women.

After a few days he noticed that he felt somewhat less bad than usual. The women were tolerable at breakfast but by cocktail hour the mystical tarts were hopelessly vying with younger women once again. Death is the great leveler. (106)

After accepting his mortality in such a crude manner, he meets “Catherine, a fifty year old who had been a feminist of the old school. She was tanned, with dark, curly hair; she must have been very attractive when she was twenty”(106). While she is talking about “Egyptian symbolism” to someone, “Bruno lowered his boxer shorts; he decided she probably wouldn’t be offended by his erection and that they might become friends”(107).   This ridiculous fantasy is comically shattered when he realizes that “unfortunately, the erection didn’t appear.” And, to make things worse, the narrator adds insult to injury by noting her body’s response to his: “She had rolls of fat between her thighs, which remained closed. They parted on less than friendly terms”(106).

Following this embarrassing moment, things only seem to get worse for Bruno. We can have no doubt that Houellebecq brings one mad event after another upon Bruno because he, like Baudelaire, is trying to inspire “universal horror and disgust.” And this preponderance drives us to feel compassion and repulsion at Bruno’s situation and character.

In the midst of his sexual frustration and existential alienation, Bruno meets “Pierre-Louis…a math teacher.” Pierre-Louis is awkward looking: he “usually wore a sun hat. He was at least six foot four and skinny, but he had a bit of a paunch and made a curious sight walking along the diving board with his fat little belly. He was probably about forty-five”(107). Pierre-Louis has a corny sense of humor and many people feel sorry for him. He is a worse wreck than Bruno, who wants to stay away from him: “In the days that followed, Bruno had managed to avoid him on several occasions” (107).

But at a certain point the two end up sitting at the same table. Bruno’s irritation at this proximity, as described by the narrator, is meant to prompt the reader to feel repulsion of Pierre-Louis’s character. The narrator conveys the experience of shock (not the character) at seeing Pierre come out of the fray to sit with Bruno. And this creates an odd kind of (mis)identification with the reader:

Pierre-Louis appeared at the far end of the row of tables; he beamed when he noticed a vacant chair opposite Bruno. He had been talking for some time before Bruno noticed, partly because he had a rather bad stammer, and partly because of the shrill nattering of imbeciles next to them…The meal was beginning to get on his (Bruno’s) nerves; he got up to go out for a cigarette. Unfortunately, at precisely that moment the symbolists (a mocking expression for the people talking about Egyptian symbolism) left, hips swinging, without so much as a glance in their direction. This probably is what triggered the incident. (107)

When the narrator writes, “the incident,” the reader, as in a reader of horror, understands that something traumatic is about to be disclosed. And it does.

The narrator tells us that Pierre-Louis, now alone on the table with Bruno, has a mental breakdown:

Pierre-Louis was red-faced, his fists balled; from a standing start, he leapt onto the table with both feet. He took a deep breath and the wheezing from his chest stopped. He started to pace up and down the table, thumping himself on the head with his fist as the glasses and plates danced around him. He kicked out at everything with reach screaming, “You can’t do this! You can’t treat me like this!” For once he didn’t stutter. It took five people to calm him down. He was admitted to the psychiatric ward of the hospital…that evening. (108)

It is in the wake of this breakdown that Bruno starts his descent into nothingness. This is all the more powerful because Pierre-Louis speaks some kind of truth to Bruno; he is, in many ways, his double. But now he is gone. What will happen to Bruno? Will he also go mad?

The narrator recounts the internal battle Bruno has with himself with respect to why he went to the retreat and how unsuccessful he has been. His fantasy, it seems, has been smashed.

The implication of these words is that Bruno has chosen to go there but he is alone; he doesn’t feel like they do, he isn’t striving to become better. And instead of making him angry, this reflection only makes him “sleepy”(108). The narrator tells us why this thought has exhausted Bruno; but, according to the narrator, Bruno’s alienation brought him a kind of happiness.

He had stopped wishing, he had stopped wanting, he was nowhere. Slowly, by degrees, his spirit filled to state of nothingness, the sheer joy that comes of not being part of the world. For the first time since he was thirteen, Bruno was almost happy. (109).

The gaze that looks back at the reader is one that comes from “the incident” and Bruno’s frustration prompts the reader to feel empathy and repulsion by Bruno’s experiences of someone else’s mental breakdown and his unbearable situation.

Houllebecq wants us to ask ourselves how we should respond to the gaze of the text. He prompts his reader to think in doubles and by way of possibilities. If Bruno were, like his brother, the microbiologist (Michel), would he able to separate from the world and study it on a scientific level? Would Bruno, if he were like Michel, suffer? These questions are challenged at the end of the novel when Michel watches a woman he had known since childhood and had met again later in life goes through a horrible experience.  Although he doesn’t totally understand love, he agrees to live with her and have a child with her.  But the child miscarries and, as a result of the attempt, she dies.  He ends up intimately experiencing the suffering and death of someone close and, for the first time, starts to experience emotions.

Bruno seemingly has a better end. After being brought to the edge of self-destruction (because of sexual frustration), Bruno is saved by Catherine who, as we saw above, was turned off when he flashed her.     They end up becoming sexual intimate and Bruno becomes less and less frustrated.

However, Houellebecq, like Baudelaire, usually gives cynicism the last word. For this reason, Houellebecq also has Bruno suffer in the end.  We bare witness to Bruno as he learns, watches, and experiences Catherine’s death after he decides – with her – that they should move in together and start a new life.

Both Bruno and Michel had an opportunity to start a new, different life. But in the end they are both robbed not just of women they loved (or tried to love) but of the world. And it is this loss that Hollebecq amplifies throughout the novel by way of his crude descriptions of aging, sexuality, failure, and frustration.   In the end, all the characters are unhappy and in pain.

The gaze that looks back at us in Elementary Particles is that of a dog.   It is the gaze of cynicism. And it has weight. The question we need to ask ourselves is…how do we look back?  Like these characters, the reader looks back at the text and feels as if s/he has, in its gaze, become….atomized.