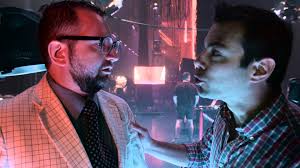 How does one make a dead language, like Yiddish, relevant? Yidlife Crisis is a webseries that has brought Yiddish back into a kind-of-vogue by featuring comedy routines in Yiddish (and subtitled in English).   Yidlife Crisis has been written up in the Forwards, Jewcy, and the Huffington Post. And the webseries has, over the last year, become more popular in the Jewish cultural world.

Jamie Elman – a Hollywood actor, writer, and producer from Montreal – plays Chaimie and Eli Batalion – also an actor, writer, and producer from Montreal – plays Laizer. They both write, produce, and act in film shorts that last between 3-5 minutes. They each play comic characters whose caricatured differences provoke non-stop chuckles. Laizer often plays the schlemiel (the tam – simpleton). His character is often beset by blindness whether to this or that thing or to saying or doing too much of this or too little of that.

The excesses and blind spots of Laizer are offset by Chaimie’s claims and insights. Of the two, he is the more intellectual (maskiladic) character. Even so, Chamie also has his blind spots. (The very fact that he constantly engages in debating things is his biggest blindspot.) In every episode, the two of them end up getting in a spat over food, cultural customs, relationships, or religion.   Their comical repartee is buttressed by lots of body gestures and Yiddish. They, so to speak, give the body back to the language in these comical exchanges. They make Yiddish relevant by making it a comical language.

In their first episode, entitled “Breaking the Fast,” Chaimie breaks the Holy rule of not eating on Yom Kippur. And he does so in front of the dumbfounded Laizer while the singing of a traditional cantor – in a lamentation – can be heard in the background.

The first words of the show come from the schlemiel: “I can’t believe you are eating right now.”   Following this, Chaimie reminds Laizer of a philosophical argument they had earlier in which Laizer said that “God doesn’t exist.” Laizer corrects him and says that what he meant was that we couldn’t know if He does.   But then he adds that it’s not God he worries about “it’s my parents.” This admission blows a hole in his argument and shows that he only keeps the holiday out of fear of what his parents will say. This is the first shoulder shrug. But there are more.

Chaimie goes on to ask Laizer – in the next scene – if he believes in all the things the Torah says. He suggests that those beliefs are primitive, of a different time, and are not modern. Chaimie shrugs but then goes on to call Laizer a self-hating Jew who is on the border of being anti-Semitic.   But then Chaimie ends up going off topic, like a schlemiel, and talks about how Jews inbreed like other peoples, have lactose issues, and are intelligent.   Laizer calls him on the association of waste, incest, and intelligence. They move on to the next topic. But…I need not go on. You get it. The schlemiel has his blind spots and the nudnik reminds him; however, that doesn’t keep the schlemiel from spilling the soup. What’s most endearing about this episode is the fact that Chaimie and Laizer stick together even though they disagree with each other. And they do so…in Yiddish. Jewishness – Yiddishkeit, in a cultural sense – keeps them together.   But if it weren’t for the schlemiel, there would be no punch line.

In a recent “Special Episode,” Yidlife Crisis goes to visit Howie Mandel. In the skit, we see the well-known portrayal of the schlemiel –as the one who spills the soup – is given flesh.

In this episode, Chaimie tells, Laizer, the schlemiel to be careful, but he does so in English:

Chaimie: What are the rules?

Chaimie: Chew all of these (breath mints) immediately.

When they are about to meet Mandel, Laizer sees “free water,” and goes to take a bottle; but Chaimie yells at him and tells him not to touch anything in fear that the schlemiel will ruin everything.   All of this is said in Yiddish.

While they are speaking in Yiddish, Mandel walks in and says “Yiddish…you’re speaking Yiddish?”   Chaime introduces himself in English to Mandel. But, playing the comic foil, Laizer doesn’t say anything. He bows and Mandel is startled by the gesture. He becomes awkward and so does Laizer.   When Mandel asks, “And you are?” Laizer gestures in a very awkard manner with his shoulders bunched up. He can’t reply to the question.

Mandel asks if Chaimie is Laizer’s “caretaker.” Laizer finally pipes up after Chaime prompts him. But he addresses Mandel in the wrong way as “Mr. Howard,” “Mr. Howie,” “Mandel.”   This is punctuated by Laizer sneezing on Mandel and Madel becoming the schlimazel. Of the many swear words Mandel calls him, schlemiel and schlimazel are in the mix.   But instead of being broken up over what happened, as Chaimie seems to be, Laizer says that Howard is a “mentsch.”   What’s most beautiful about this scene is that Chaimie, instead of being angry, goes from a frown to a smile and repeats what Laizer said about Mandel being a mentsch.   This move puts a twist on the classic tale of the schlemiel spilling the soup on the schlimazel. In the end, it’s better to be happy about this or that failure than to be aggrieved.

Chaimie plays along with the schlemiel and, in the end, the viewer can act “as if” the main take away from the scene is that Mandel is a mentsch. Regardless of what just happened, the Yiddish emulation of the mentsch is what remains. And this is what many of the Yidlife Crisis episodes leave me with: despite their disagreements over food, culture, or sex both Chaime and Laizer are good people and we would like to see more of them and their comic routines.   But, ultimately, it is the schlemiel’s naïve foibles in relation to Chaimie, Mandel, and others that give life to a language that once was vernacular.

Mandel, the “Rabbi” of comedy, gives Yiddish his stamp of approval (a haskomah). But he really does this once he is sneezed on.  In such exchanges, Yiddish happens and becomes relevant.  Perhaps Jews – who do comedy with a Yiddish accent – are…still funny.   At the very least, we can all agree that they are mentsches.