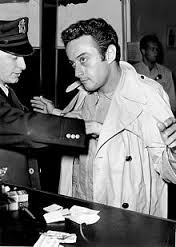 On November 18, 1917 Franz Kafka wrote in one of his Octavio Notebooks the following meditation on good and evil: “Evil knows the Good, but Good does not know of Evil.” What Kafka was getting at is quite profound. If there is in fact something Good or someone Good, he,she, or it cannot know evil. The best modern example we have of this is not a saint so much as a schlemiel. The schlemiel cannot – in theory (so to speak) – know evil.   But, as I have noted, Saul Bellow wants to take this premise to its limit by literally having Herzog – the main character of the novel by the same name – attempt to experience and know evil.

At the very least, Saul Bellow’s Herzog realizes that he has been duped by his close friend Gersbach. But even though he knows this, does he know Evil? Does he want to? It seems he doesn’t want to focus on it. But this may not be possible. Although he tries to think good thoughts about Gersbach, his lawyer, Simkin, prompts Herzog to slowly realize the grave injustice that has been done against him.   Gersbach, Simkin insists, is a thief and a liar. Simkin goes so far as to call him a murderer so as to prompt Herzog to feel the wrong done to him and to seek out justice. But, since Herzog is so good-natured and only wants to see the good, he has a hard time seeing (or as Kafka would say, knowing) the injustice in front of his own face.

What Bellow seems to be telling us is that the schlemiel doesn’t look for injustice. He stumbles across it.   And when he does, he has a hard time understanding what he is seeing because he only sees and knows the Good   Herzog is a case in point. When he goes to visit Simkin in court, he is already worked up but, still, he doesn’t understand the nature of evil and injustice.

The narrator prefaces the scene of Herzog’s first encounter with injustice (in court) by way of a series of juxtapositions. They prompt a kind of sadness and a sense of loss:

He turned to face the vast gray court building. Dust swirled on the broad stairway, the stone was worn. Going up, Herzog found a bouquet of violets, dropped from the hand of a woman. Perhaps a bride. Little perfume remained in them…he gave them burial in a trashcan, hoping they had not dropped from a disappointed hand. (224)

The smell of beauty has gone away and now, by facing injustice, he, in a way, is facing death and failure.   He is slowly experiencing Evil but he does this by way of feeling a sense of loss. The smell of the lost violets is dwindling but Herzog wants to imagine that they dropped from a hand that was joyful, not disappointed.

When he comes to sit in on a series courtroom trial, we see Herzog politely orienting himself not knowing what he is about to experience: “Herzog crossed his legs…and dark-eyed, attentive, averted his face slightly as he prepared to listen, a tendency inherited from his mother”(225).

The narrator, at this point, makes an interesting move: he lets the trial go on with little commentary from Herzog. This operates in such a manner as to register Herzog’s astonishment at the proceedings. He has never seen anything quite like this.

“…Dragged this man, drunk, off St. Nicholas Avenue, into the cellar of premises at – what is the exact address? With intention to rob…

“How much money did you have in your pocket?” “Sixty-eight cents, your honor,” the bandaged man said.

“And did he force you to enter the basement?”

As the case unfolds, Herzog sees the court put together a story of how one man clobbered another in a basement for “sixty eight cents.” He was hit after having a drink with the man in a basement.   The betrayal of trust, Herzog noticed, is something to which the court was accustomed.   The whole process, the narrator notes, was a “dull routine.”

The narrator describes the scene in such a way as to bring out the shallowness and absurdity of it all and show how evil is, itself, stupid. And those who involve themselves with it are also a part of the stupid scene:

That is – his blood was well thinned with whisky as it dropped into the coal dust. Whisky-blood was bound to be shed in some such way.   The criminal began to go, the same wolfish tension within his voluminous, ridiculous pants. The cop…lard faced…held the door open and sent him on his way with a pat on the shoulder. (226)

The “new group” that comes in after this trial goes deeper into depravity. It starts with a testimony of how “this man (name given) standing in the adjacent space (toilet) reached over and placed his hand upon my organ of sex at the same time saying….”(227).   The offender, we learn, was a German intern at a hospital. If he were to “plea guilty” he would “never practice medicine in the USA”(227).

But before we can hear more of the case, the narrator shows a distracted Herzog who starts seeing the whole scene in a gross, physical manner. He sees their humanity but it is another kind of humanity. One that is more brutal and heartless:

That mass of flesh rising from the opening of the magistrate’s black cloth, nearly eyeless, or whale-eyed, was, after all, a human head. The hollow, ignorant voice, a human voice. You don’t destroy a man’s career because he yielded to an impulse in that ponderous stinking cavern below Grand Central, in the cloaca of the city, where no mind can be sure of stability, where policemen…tempt and trap poor souls. (227)

Herzog sees the depravity in the court. And this is intensified with each trial. But it comes to a head when a child is dragged in. Without a doubt, this hits hardest because Herzog, in many ways (and like all schlemiels), identifies with the child.

Immediately after noting this, he sees a boy brought in:

The prisoner was a boy; though his face was curiously lined, some of its grooves feminine, others masculine enough. He wore a soiled green shirt. His dyed hair was long, stiff, dirty. He had pale round eyes and he smiled with empty…cheerfulness. His voice…was high pitched, ice-cold, thoroughly drilled in its affections. (228)

As the description above suggests, the boy passes between the masculine and the feminine. And then, to Herzog’s shock, we learn that the boy is a boy for some and a girl for others depending on what the client wants: “Your honor, I’m a prostitute.”

He enjoys the “dirt”: “Filth makes it better, judge.” And Herzog notes that all the court relishes this oddity.   He calls them all, including the boy, “actors”(228).   The courtroom becomes a theater rather than a place of justice.

But then things get more odd when we learn that he wasn’t caught in an act of prostitution so much as a holdup of a store. He was subdued by the owner who hit him with a baseball bat.

But what astonishes Herzog is the fact that the boy feels no remorse. He is “cheerful.”  For Herzog, this is a comedy of sorts – but a disturbing one, since the court is also involved:

He seemed to be giving the world comedy for comedy, joke for joke. With his dyed hair, like the winter beaten wool of a sheep, and his round eyes, traces of mascara around them, the tight provocative pants, and something sheeplike…he was a dream actor. With his bad fantasy he defied a bad reality, subliminally asserting to the magistrate, “Your authority and my degeneracy are one and the same.”(228)

What does Herzog take away from this? He sees everyone in the court as not just an actor but as a “whore.” This, he thinks, is what realism is all about. The idea of realism is “nastiness in the transcendent position.”

But this is not a simple kind of meditation on Realism. It affects him deeply. As all of this goes on, Herzog starts feeling “something terrible, inflammatory, bitter, had been grated into his bloodstream and stung and burned his veins, his face, his heart. He knew that he was turning white, although his pulses beat violently in his head…He opened his color…The sweat broke of on his face”(230).

The narrator tells us that this court experience – which hit its zenith with the child prostitute and his comical-slash-defiant exchange with the court  – brought him near to his death but it gives him a new outlook:

He must live. Complete his assignment, whatever that was. (231)

What ensues is not so much a reflection on injustice as a meditation on who Herzog thinks he is and what he must do. The narrator suggests that he must go through this internal process if he is to encounter injustice.  This is his natural response to the courtroom circus with all its absurd comedy and perversity. His internal struggle is also a preface to his first real, heart-felt intimations of what evil and injustice are and have been done to him. After such knowing, Herzog must do something about it.   Mere reflection will not do.   But if he does something, will he continue to be a comic character…only knowing the Good but not knowing Evil?