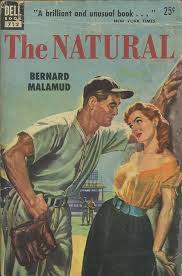 One of the most intriguing aspects of the Bible is the fact that it evinces a creation “out of nothing.”  Creation, it seems, comes out of nowhere.  We have no idea why God creates the world.  We only see the fact of creation (as the expression of God’s radical freedom).  And this turns the will of the creator as well as the creation into a mystery.  What follows from creation, however, is sometimes less a mystery.  Many characters in the Bible, for instance, are archetypal.  They rise and fall.  They go from innocence to experience.  And there is a lesson to be learned.  However, although the story of someone’s journey from innocence to experience is typical, the mystery of creation offsets this journey because it suggests that we may not know why someone has to go through this transition; perhaps it, too, is a mystery.

Drawing on the myth of the creation out of nothing, the beginning of Bernard Malamud’s first novel – perhaps the best novel ever written on baseball – The Natural marks the beginning of an American life from out of the darkness.  Roy Hobbs, the main character and first word of this novel, comes out of nowhere.  He is a mystery and each of his movements, at the outset, is shrouded in mystery.

In the first scene of the book, Malamud uses a register that suggests that Roy is like an animal or primitive child who is looking through the window of a womb (Malamud plays on this by calling it a “berth window”).  He paws it and lights a flame before he passes through a dark tunnel:

Roy Hobbs pawed at the glass before thinking to prick a match with his thumbnail and hold the spurting flame in his cupped palm close to the berth window, but by then he had figured it was a tunnel they were passing through and was no longer surprised at the bright sight of himself holding a yellow light over his head, peering back in. (3)

To emphasize the mystery, Malamud focuses on Hobbs’ gestures and the gestures of the train.  Each of the words used to describe these gestures (such as “yanked,” “thundering,” “kneeling,” “splurge,” “bulked,” and “sprays”) brings out something pre-historic and primitive:

As the train yanked its long tail out of the thundering tunnel, the kneeling reflection dissolved and he felt a splurge of freedom at the view of the moon hazed Western hills bulked against night broken by sprays of summer lighting, although the season was early spring.  (3)

Hobbs watches the land “flowing” by him “despite the lulling train.”  And as he watches he “waits” with a “suppressed expectancy for a sight of the Mississippi, a thousand miles away”(3).  Hobbs comes out of nowhere and is born into a world of flows and gestures. They bring him out toward the Mississippi.  He is born or rather flows into America.  And at birth he has a “splurge of freedom.”

In the midst of this mythological birth and primitive experience of freedom, we learn that he has no sense of time since “he has no timepiece.”  In primitive America, things flow past him in the river of time.  One of things he sees, as things flow past him, is a vision of a an American child throwing a baseball in front of a “bone white farmhouse with a sagging skeletal porch.”  The emphasis on bones reminds me of Ezekiel’s vision of the dry bones in the valley and his question, “Will these bones live?”

Malamud suggests that Hobbs has a kind of mystical vision of a boy who plays baseball, a boy that emerges out of a vision of sorts.   The house is “alone in untold miles of moonlight, and before it this white faced, long-boned boy whipped with train-whistle yowl a glowing ball to someone under a dark oak, who shot it back without thought, and the kid once more wound and returned”(3).

The scene is mythical because it is “unique” and happens over and over again.  Malamud, here, suggests that in America baseball has a mythical core.  The ball is caught up in a kind of Nietzschean eternal return.  And while Roy is aware of this vision, he finds something problematic about it since it reminds him of a confusing dream.

Roy shut his eyes to the sight because if it wasn’t real it was a way he sometimes had of observing himself, just as in a dream he could never shake off….of him standing in  a strange field with a golden baseball in his palm that all the time grew heavier as he sweated to settle whether to hold on of fling it away.

The dream puts before him his destiny.  Should he or should he not, so to speak, take the ball?  His decision to keep the ball leads the ball to become increasingly heavy.  He then gives up and, upon making this decision, the ball becomes “fluffy light” and a “white rose” breaks out of its hide.  As it “all but soars” off, he swears to “hang on to it forever.”

As the novel unfolds, we learn that his emblematic scene is destructive.   It is an Ameircan dream that emerges out of the primitive landscape of America.  It is the dream of success.  In the following paragraph, Malamud writes about the elements and returns to a gestural language.  However, here, the language emphasizes how things are off kilter.  And, in getting caught up in this language, the narrator forgets that a window separates Hobbs from the world:

As dawn tilted the night, a gust of windblown rain blinded him – no, there was a window – but the sliding drops made him thirsty and from thirst sprang hunger. (4)

I would like to suggest that we read this in terms of a mythological sequence.  The confusion about the window indicates that Hobbs is and is not damaged by the elements outside the train of birth.  He is protected by the train – which throttles through the landscape – but Malamud wants to point out that the movements of the train make Hobbs thirsty and hungry.  Hobbes dream, in other words, is not pure.  It is tainted by hunger and the desire for movement.  And this, as the novel goes on to show, will lead him to make reckless gestures.

What I like about Malamud’s creation of Hobbs is that he is a mystery of American creation whose childlike dreams are tainted by the wild and free movements of an American train through the primitive landscape.  It suggests that Hobbs’ struggle with failure and success – which we see throughout the novel – are born out of his relation to the American journey.

He paws at the window and scratches at the match behind the window with his thumb.  He has primitive beginnings.  His vision comes out of the flowing landscape, but it also passes away and leads to hunger.  His childishness or primitiveness, which he brings to the game of baseball, is constantly in the background of everything he does.  It marks a kind of innocence that, for me, is of great interest because Hobbs has many qualities that are shared with the schlemiel.

What Malamud has managed to do is to depict an American myth that is caught between visions of success and the reality of failure.  Hobbs is a “natural.”  He emerges out of the landscape. But, at the same time, he is not a natural.  He is pawing at the window, but from behind it.   He imagines that nothing separates him from his dream and that he can become a hero.  But in reality, this dream is unnatural and has devastating consequences.

The American dream, Malamud seems to be telling us, comes out of something primitive and seemingly natural, but it, like the schlemiel, has its blind spots.  The twist, here, is that Hobbs is not a comical figure but his innocence and blindness are.  His dreams, as they overshadow reality, have a tragic-comic feel only because they are so innocent.  They emerge out of the mystery of creation…Ultimately, Malamud seems to be suggesting that his innocence, his dream, and his birth out of nothing – like America itself – are a mystery.