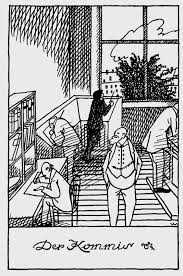 Robert Walser’s fictional child-character, Fritz Kocher begins many of his “essays” with a serious reflection.  But as the essay goes on Kocher drifts into different zones of joy and terror that dissipate the original intent of his essays.  Indeed, his drifting shows us that he often has little to no interest in the things that pre-occupy society.  He would rather bind himself to things that spark his imagination.  After all, as I pointed out in another blog entry on Walser’s Fritz Kocher’s Essays, Kocher sees himself as an “artist.”  And although he is not quite sure what this means, what he does demonstrate to the reader are the ways (as opposed to a portrait) of an artist, so to speak, as a young man.  These ways are the ways of an individual who passes in and out of affective states and imaginings. But what makes this passing significant, for Walser, is that before the child-artist passes in and out of these states s/he begins with a state(ment) of solidity and intent that is sanctioned by society.

In an essay entitled “Careers,” Kocher begins with the statement of serious intent regarding the meaning and purpose of finding a career.  As we learn, the goal of it all is to go from being a child to being an adult:

Anyone who wants to live an upstanding life in this world needs a career. You can’t just work your way along. Work has to have a particular character and a goal it is aiming toward.  To reach that goal, you choose a profession.  This happens when a person leaves school, at which point that person is an adult. (21)

Although Kocher begins his essay with this serious tone and statement of intention, he ends on an entirely different note.  He goes through many professions and argues that he simply can’t choose them and worries about the professions his parents would choose.  In other words, he’s not sure how he wants to or whether he wants to have a career.  He entertains living as an artist or musician in a big city, but, ultimately, he’d rather be nomadic; he’d rather join the circus:

Well there’s one other thing I have in my soul: It would be great to join the circus.  A famous tightrope walker, sparkles on my back, the stars above me, an abyss on either side, and just a slender, delicate path before me.  (22)

But, after pondering this, he thinks that he would rather be a clown: “I do feel I have some talent for joking around”(22).  (I touched on this point in my blog on the essay on friendship.)  However, he fears that his parents would be “hurt” if he were to become a clown.  For this reason, he states, out of a kind of sadness: “I’m not worried about finding a career. There are so many of them”(22).

Kocher’s drifting toward this affective state, although differed, resurfaces in his essay on “The Fair.”  In that essay, he begins by saying that the fair is “useful” and serves the purpose of gathering farmers and the community together.  However, as the essay goes on he drifts into the space of joy and terror.

He finds himself in these states – which I would call, like Georges Bataille, useless – when he reflects on the puppets. But before he has this reflection, he is already adrift.  He describes his experience of the carousel:

I let myself be carried up and down, and down and up.  You ride the most beautiful sleighs of silver and gold, the starts in the sky dance around you, the world revolves with you. (32)

When he arrives at the “Kasperli puppet show,” his desire is already nomadic.  He notes that he laughs at “every blow” of this or that puppet.  However, this turns into horror: “Death leaps out incredibly fast and strikes victims down with marvelous accuracy. They are pretty violently executed”(32).   The puppets executed are “generals, doctors, soldiers, and policemen” – in other words, they are the “useful” members of society.

Meanwhile, the puppet clown killer, Kasperl, gets “away with a light beating.”  He is a sadistic kind of clown/puppet.  What he likes about him is how “his face never changes.”

But he doesn’t focus on it too much; he drifts elsewhere to see the Freak Show.  He sees a “snake lady” who stands as still as a “photograph.”

Taken all together, his drifting in and out of reality has the flavor of virtual reality.   And all of this, ultimately, is wasteful and suggests that society is not of primary interest to him so much as affective states that he would like to see and even participate in.  His childhood, as he sees, will keep him from a useful career and he prefers this. In other words, his end point differs radically from his starting point.  He leaves his original intentions for the circus and this leads him into a world where teleology has no place.  But, ultimately, in the end, he acts as if nothing has changed and he has kept to his original purpose.  This, perhaps, is the trick: to be able to start and end on a point while, in essence, drifting everywhere between point a and b.   This, it seems, is the drift-work of Kocher’s essay and the way of the artist who ends up in the circus.