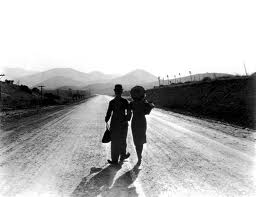 The poet Charles Baudelaire has written several poems in which the poetic voice or the narrator (of many prose pieces from Paris Spleen) wages a battle with TIME.  He wages his fight in the name of Timelessness and intoxication; however, many of those battles ring out with the sound of despair.  To be sure, Baudelaire was very pained by the fact that he had to constantly battle with time.  And, more importantly, he was all alone in this fight against Time.

Delmore Schwartz, no doubt, read Baudelaire.  And in many ways, he also struggled with Time.  However, he didn’t do it all alone.  In his poem “Time’s Dedication,” he calls on “you” the implied reader or some other to join him in this battle.  And, unlike Baudelaire, the battle doesn’t end in despair or tragedy.  Rather, it has a comic ending which includes a key reference to Charlie Chaplin (who, lest we not forget, Hannah Arendt saw as the last schlemiel of what she calls the ‘hidden tradition’).  Schwartz’s comic ending does what Baudelaire can’t: it redeems time by way of taking it away from the trajectory of death and realigns it with what Emmanuel Levinas would call the “time of the other.”  And what makes this so novel is that the poem is “time’s dedication” – not his.

“Time’s Dedication” starts off with a meditation on the self and its bout with the Time:

My heart beating, my blood running

My mind moving, the ground turning,

My eyes blinking, the air flowing,

To be sure, the last words of this stanza bespeak the relation of time to death: Time will kill the poet.  However, the next stanza asks that an implied “you” stay with the voice of the poem and “stand still”:

Abide with me: do not go away,

But not as the dead who do not walk…

Quit the dance from which is flowing

Your blood and beauty: stand with me.

In the face of this voice, the last stanza counters and insists that the voice obsessed with death and time to “wait for me”:

Stay then, stay! Wait now for me,

Deliberately, with care and circumspection,

This countering voice suggests that what “we” need to focus on, with deliberation, is “walking together.”  And this walking should be in a comic manner “like Chaplin and his orphan sister”:

Controlling our pace before we get old,

Walking together on the receding road,

Moving together through time to all good.

The last stanza suggests that “walking together” like “Chaplin and his orphan sister” – with their odd walk – is a manner of  “moving together through time to all good.”  Moving toward the good together is something we find in Mendel Mocher Sforim’s The Travels and Adventures of Benjamin III.  We also see it in Gimpel the fool who, it seems, is always walking toward the good even though it doesn’t seem to be in sight.  These characters, it seems, are not affected by a fatalistic approach to death.  They avoid it by way of trusting the other and the good.

The idea that one is moving toward the good, as the future, appears in Emmanuel Levinas’s work.  To be sure, he ends his book Totality and Infinity with a section entitled “Being as Goodness – The I – Pluralism – Peace.”

Goodness does not radiate over the anonymity of a collectivity presenting itself panoramically, to be absorbed into it.  It concerns a being which is revealed in a face, but thus it does not have eternity without commencement.  (305)

The word “commencement” is interesting as it suggest a meeting and a movement of two people.  Levinas goes on to describe goodness as an “absolute adventure” which is “transcendence itself.”  But this is the not the transcendence of an isolated “I.”  Rather, “transcendence or goodness is produced as pluralism” and it “proceeds” from me to you.   Elsewhere, Levinas calls this relation of goodness the “time of the other.”

What I like about Schwartz’s poem is the fact that it is “time’s dedication.”  The poem is dedicated to the poet by the time of the other.  And it ends with that time rather than dedicating it to the time of the self and death.  Most importantly, this dedication is translated into a comedic kind of walking down the road.  It isn’t exactly “heroic” in the Heideggarian sense of being-toward-death; rather, it is innocent and naïve.

This poem suggests that Schwartz would rather you “wait” for the poet than rush off to death.  And once you arrive, we can walk off together “like Chaplin and his orphan sister through time…toward the good.”