1. My family came from old Europe. We were like that mouse from An American Tail, Fievel. And when we came to the Ellis Island the immigration people changed our species from “mouse” to “human.”

2. I often see Groucho Marx in my dreams.

The grease-painted mustache is of the same general variety to me as those worn Little Richard and John Waters, and yet the extremity of his facial features—and here I think of Digital Underground rapper Shock G’s “Humpty Hump” character (“Doowutchyalike” and “The Humpty Dance”)—and the caricature of the costume struck me as strangely mellifluous with Groucho’s character.

The most cerebral and silver-tongued of the brothers, Groucho could express to me, as I watched his movies on television in my youth (at 6, 7, 8?), along with the always less-interesting Abbot and Costello films, the knowing wink of persona, or performance, and of Jewishness used as both weapon and costume.

3. The old man takes a cruise for the first time, late in life, but he doesn’t want to go. His children do, and they ultimately arrive in New York City to embark for a week’s cruise—the ridiculous activities, the canned stage shows, the sunsets straight out of central casting.

At dinner, the old man is astounded at the bounty of the food, the endless buffet. He sits down at the table, not sure what to make of it all, and is surprised to hear a voice speaking German.

It turns out that the young waiter is part of the international staff, and is indeed from Germany. Over the course of the week the old man begins to speak with him in German, a few words one night, a few more the next. By the end of the week they’ve spoken of many things involving the food, the boat, the working conditions.

On the last evening, at the last dinner, the waiter says to the man: “Where did you learn to speak such excellent German?”

The old man looks directly at the waiter and says “Auschwitz.”

4. Underneath—and it took me a while to recognize that the Marx Brothers were Vaudevillians, in costume (and actual brothers, unlike the Doobies)—I imagined that the performers were absent, not present, that if you lifted the glasses and mustache and eyebrows off Groucho you would find the non-present frame of the invisible man.

I had Groucho very much in mind when writing [SIC], [MU1] my new and plagiarized novel. The work takes it’s title from the Latin abbreviation for “as written,” includes public domain works, like “Caedmon’s Hymn,” Sherlock Holmes, and the prologue to The Canterbury Tales, and features Wikipedia pages, intellectual property law, genetic codes, and other untoward appropriations. The text also pivots on Jorge Luis Borges’s story, “Pierre Menard, Author of Don Quixote,” taking its publication history through a replicated series of Google auto-translations.

The fine-art edition ($24,998.98) comes with a biological pathogen, which the reader may choose to deploy over the text. In this way, [SIC] will make the reader sick—sick about copyright. The book is timed to the release of 25 free, full-text e-books—including The Red-Headed League and Young Goodman Brown, now bearing my “signature.” 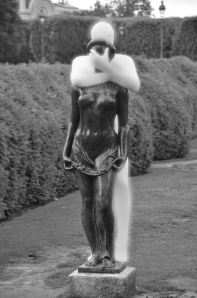 5. When I entered Hebrew School in 5th grade, I could name exactly one Jewish holiday with ease—the ever-present anti-Christmas called Hannukah—although Passover might come to me if I thought hard enough, complete with the frozen Chinese turkey my mother complete with a brackish sweet sauce attached to the edges of the meat (yes, edges!).

Only in my late 20s did I discover Elijah, Biblical wonder-worker, is a separate entity from the Angel of Death. I assumed, perhaps not so strangely, that the angel would slaughter the firstborn child of those with doors unmarked by lamb’s blood, yet for the families of the chosen people, us, the only ones on the block, the old boy, in Elijah guise, would rush in for a quick drink.

6. The appropriations of [SIC], the second part of my DEAD/BOOKS [MU2] trilogy from Jaded Ibis Productions (after BLANK[MU3] ), are not specifically inflected as “Jewish” and my writing is not particularly identified as ethnic in any particular way. And yet to copy, to cover, to hide in plain sight, these are to some extent the lessons I absorbed as a collage artist. 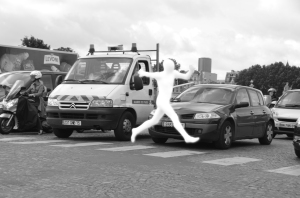 7.  The entire congregation of the Hebrew School, from the well-meaning cantor with the baritone voice to the old Rabbi, whose name escapes me but who I picture as somewhere between the second and third Rabbi in the movie A Serious Man, to the volunteer teachers accredited to the subjects primarily by their willingness to volunteer, implicitly, for this anti-Nazi activity of 1980s Jewish race preservation, laid down this narrative with repeated gravity whenever possible: You, a Jew, are eternal victim.

At the school, the matronly Hebrew History teacher explained the assignment, and I quickly understood that the reports would have to be completed in the only way possible before the internet: from the massive World Book Encyclopedia that had been my father’s and which lined the spaces of our bookshelf not far from the cartoon of Judah P. Benjamin (speaking to me, always, in the voice of Looney Toons’ Foghorn Leghorn). From 1954, the volume remained always for me, with its thousands of pages and the crinkle of its onionskin, as the source for all information of the world entire, eternal, unmoving even 30 years after its advent.

The Hebrew History teacher had me choose from the hat full of names on small sheets of paper:

My name? The name I chose: Josef Mengele.

8. My name? The name I choose: Groucho Marx.

9. My name?  The name I choose in [SIC]: Davis Schneiderman.

His Multifesto: A Henri d’Mescan  (Remix Edition), contains remixes from Matt Bell, Roxane Gay, Alissa Nutting, and others. He is editor of The &NOW AWARDS: The Best Innovative Writing (vols. 1 and 2).

Schneiderman’s work has appeared in numerous publications including Fiction International, Harpers.org, The Chicago Tribune, The Iowa Review, TriQuarterly, and Exquisite Corpse; he blogs for The Huffington Post and is a Contributing Editor for The Nervous Breakdown .

(The photograph was taken by