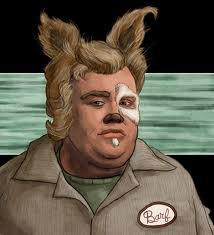 In stories like I.B. Singer’s “Gimpel the Fool,” Sholem Aleichem’s Motl, the Cantor’s Son, or I.L. Peretz’s “Bontshe Shvayg,” we don’t always see the positive effect the schlemiel has on people around him.  Or, if we do, that effect is usually minimal. And that is the point: the fact that people don’t change spurs the reader to be disappointed with the society that laughs at the schlemiel.  On the other hand, Peretz’s schlemiel spurs people to realize that they must change their priorities.  Regardless, we don’t often see the effect of the schlemiels magic in Yiddish literature.  However, in Hasidic literature we, from time to time, do.   I would include Meir Abehsera’s parable of the schlemiel in this kind of literature.  However, I would call it, instead, a “neo-Hasidic” kind of literature since it reflects not just on the schlemiel’s impact on people but it reflects on it within the text.  To be sure, the inclusion of philosophical reflection in the midst of the text is a modern practice.  We see it in all of the great modern and postmodern writers such as Lawrence Stern, Hermann Broch, James Joyce, Thomas Pynchon, etc.  Abehsera includes such reflection to foreground the relationship of the writer to the schlemiel.  And at the end of his parable, he points out what real-life experience spurred him to create and reflect on this relationship.  Abehsera adds the “old beggar” to this relationship.   To be sure, at the end of the parable the beggar – in many senses – stands between the writer and the schlemiel.  Abehsera shows how, of the two, the schlemiel is greater.  The schlemiel can transform others around him in ways that the beggar cannot.   And, in the end, the schlemiel aids the beggar and, in effect, helps the poor and the needy.   He does this by way of transforming himself and becoming-animal.

In the last blog entry, I pointed out how the schlemiel lay dormant in the old beggar and  how the old beggar is reminded of this by way of a dream.  The dream is spurred by the old beggar’s experience of a circus as he begged for money.  As I noted in the last entry, the old beggar meets another old beggar in the dream who tells him about history of the circus and reminds him of the power of joy and laughter – which is at the schlemiel’s core.    The main point of this reminder was to inspire the beggar to go into the world and transform it not so much as a beggar than as a schlemiel.  To do this, he not only has to encounter one kind of joy with another; he also has to sweeten bitterness with joy.   And this last task is the hardest task of all for the schlemiel.

In the last part of the parable, the old beggar awakes from his dream and goes into the world.  But instead of going into the circus, he emerges into a world of angry and solemn people.  If they give anything to him, they “throw” it at him.  The narrator, who seems to have merged with the old beggar, takes on a weary tone and muses on the nature of judgment.  He points out that these people don’t “smell” good.  As I pointed out earlier, the Jewish tradition associates smell with judgment.  And it is the Messiah who it is said, will have the power to smell someone and judge them.  Abehsera plays on this and notes that though the beggar is not the Messiah he, nonetheless, knows what the smell of anger and bitterness is from his own life and experiences.

Using his sense of smell, so to speak, the beggar is able to determine how much a person should give if he/she is to be redeemed.  The implementation of this judgment apparently does wonder.  The narrator notes how “astonishing” it is “how a mere monetary transaction can acquaint the contributor with the reality of redemption.”

The narrator tells us that the old beggar does extremely well and brings home a lot of change.  He helps people to narrowly “avert death” by way of charity and this inspires him to take on the toughest challenge; namely, a miser who never gives money to anyone.

The encounter between the miser and old beggar is telling.  To be sure, the old beggar can do nothing to prompt the miser to give.  The miser is so bothered by the old beggar that he accuses him of “stealing” all of the money he has acquired through begging.   He then proceeds to kick him out of his home.

The old beggar’s response to the miser, strangely enough, transforms him into a schlemiel or rather a playful dog:

As the man lets loose a stream of obscenities, the beggar steps back and begins mimicking his mad behavior, trembling wildly, then falling on all fours, yelping and growling and circling the man who thinks he is having delusions upon seeing the beggar transform into a dog!  The dog barks, and the man panics and kicks it in the head; but the animal grabs the man’s bathrobe and pulls so hard that the miser tumbles, head over heels, crashing to the ground.  (130)

This transformation of the beggar into a dog-schlemiel is fascinating and, as far as I know, has no precedent in schlemiel literature.  Abehsera has the miser and the schlemiel-dog tumble around with each other and, in the end, he “breaks” the miser with laughter:

Man and animal thrash about, knocking over the table, causing plates and dishes to shatter on the gazebo’s marble floor.  The man gropes pitiably among the fragments of glass and porcelain and the remains of his meal.  He reaches for a large bone and flings it across the lawn, beyond the pines.  ‘Go get it!’ he shouts to the dog who, good naturedly, goes scampering after the bone…The latter is delighted. (131)

As all of this goes on, the miser becomes childlike and throws the bone out again.  As he does so, he notices that he is being watched by the community. They cheer and laugh in joy as they watch him and he waves back of them in acknowledgment.  In effect, the schlemiel has won.  By becoming a dog he has endeared the miser and prompted him to give.

But this isn’t the end of the tale.

Abehsera has the schlemiel/dog transform back into the old beggar.  And, strangely enough, the two get into a fight.  The “townspeople stop laughing.” And “absolute silence is interrupted by scattered remarks directed at both the beggar and the rich man.”  Some protest the beating and some encourage it.  But, at some point, the miser let’s himself be beaten up and then it occurs to the audience that they really aren’t fighting: they are play fighting:

The kicks are not truly kicks and the screams are not screams either. It is an unrehearsed drama between two men who, moments before, were antagonists, but through the chemistry of their encounter are about to engender a love so deep as to render it contagious.  (132)

In the end, the miser starts to laugh and the townspeople are dumbfounded.   But it is this dumfoundedness which transforms the community-as-circus into a community that is returned to itself.   Abehsera notes that his parable is drawn from the teachings of the Baal Shem Tov since he, like the Baal Shem Tov, writes of a character who acts with foolishness to bring the dead back to life.

And this, says Abehsera, is the wisdom of the fool.  The schlemiel shares this wisdom with the writer and it becomes the “paradigm of a new type of intellect”(133).

What I find so interesting about this “new type of intellect” (and the parable that is used to communicate it) is not simply that it is “relayed” to the writer by the schlemiel; but that it is also relayed by the schlemiel through becoming an animal that makes the bitter sweet and the man into a child.