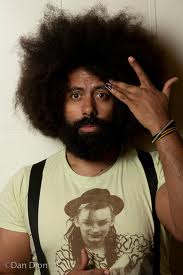 What makes Watts so fascinating, however, is that, like a radio switching from channel to channel (to use an “old school” metaphor) or a person scanning through their texts or facebook feeds, Watts moves from language to language and medium to medium.  Yet he gives us enough time to check out each medium or language before he moves on to the next.  But what makes his routine comic is not just found in how he works with each medium or voice, but also in how he moves from voice to voice with such rapidity and skill.

Reggie’s comic greatness is also written into his body and history.  He is a hybridic character with an unkempt retro-afro.  His mother is French and his father is American.  And since his father was in the military, he moved from place to place before he ended up in Great Falls, Montana.

In a way, Reggie seems to be linking these places, identities, and bodies.  He is seeking for a child-like relationship between them, one that plays at maturity.  In his work, I find an interesting take on what I looked at in yesterday’s blog entry; namely, what Gombrowicz calls “difficult childhood.”  Gombrowicz points out how a good artist will necessarily exhaust maturity and will be thrown into a “difficult childhood” while, at the same time, being, a grown person.  But while Gombrowicz returns to childhood in order to ruin his “Polish Childhood,” Watts returns in order to play on it.

In this clip from TED Talks, Watts inhabits a “difficult childhood” but in a way that seems to be lacking the anxious edge of Gombrowicz’s “difficult childhood.”  Watts does this by way of switching languages, melodies, and rhythms.  The affect of this is to play on the “seriousness” of TED talks.  Yet, at the same time, while playing on it, it does seem as if he is “serious.”  This is what we get from the audience.  They don’t laugh at him when he gets serious.  But at a certain point they do.  Like Andy Kaufman (Watts received the “Andy Kaufman Award” in 2006), he is able to hold the audience in an ambiguous space between laughter and seriousness.

Watts’s form of comedy is working on many levels and, as I mentioned above, he moves between one mode and another in a comic manner so as to create an unusual relatonship that we would never have surmised.  But, in the midst of all this, there is a mark of humility, charm, and absent-mindedness that makes one think of the schlemiel.   But he is not a traditional schlemiel; he is a schlemiel for a new age, an age that has been raised on the internet, hip-hop, and youtube.   But he is not for everyone.  His appeal is to a more narrow audience which appreciates all of this and, at the same time, likes to think deeply about the “meaning of it all.”

Reggie Watts is a comical mystic of the information age.

I would like to return to Watts’ work in future entries.  He is one of the most interesting and innovative comedians out there and watching him is not only entertaining but meaningful and thought provoking.  Playing on McLuhan, I’d say Watts is the message(s).