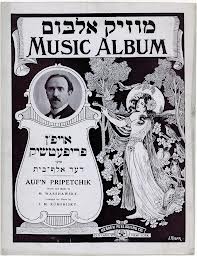 In a “Five Books” interview, the Jewish-American writer Allegra Goodman was asked what five books in Jewish fiction she would suggest people read.  Each book, for Goodman, would provide readers with one sense of the Jewish experience.  One of the books she chose was Sholem Aleichem’s Inside Kasrilevke (the contents of which are the stories of this fictional town (Kasrilevke) which is, arguably, Sholem Aleichem’s version of Chelm).  Like Irving Howe, she notes that the Broadway version of Fiddler on the Roof is a “cartoon version of his work.”  What she finds so important about Inside Kasrilevke is that it is “very funny, laugh out loud funny.”  Goodman likens the stories to “comedy routines” and notes that this book is her “comic ideal.”

Taking Allegra Goodman’s suggestion to heart, I think it makes a lot of sense to focus on these comic routines. But in doing so, I’m interested not so much in a comic ideal as in how the narrator of this collection of stories relates to schlemiels and other stock comic characters in the stories.   In this and in other blog entries on Inside Kasrilevke, I will be making a series of different readings which look into comic relationships and comic rhythms so as to understand how Aleichem, in this collection of stories, presents the schlemiel.

Right off the bat, Aleichem, the “author,” explains why he is writing this book in the “Author’s Foreword.” The picture he presents gives us a sense of someone is an insider and an outsider of the town.  For this reason he, like Sancho Panza to Don Quixote, can report on what happens in the town.

Like a writer of his times (and not, as Howe would say, a folkish “oral story teller”), he notes that “of recent years” many people have been writing books “about cities and lands.”  Playing on a Jewish stereotype (and echoing something we see years late played on in Woody Allen’s film Zelig) he “says to himself”: “We imitate other peoples in everything: they print newspapers – so do we; they have Christmas trees – so do we; they celebrate New Year’s – so do we.” So, just like they publish “guides” to big cities, he asks (with a shrug of sorts): “why shouldn’t we get out “A Guide to Kasrilevke?”

After pointing out how he has much in common writers in pursuing such a project, Aleichem notes how much he owes to this town of fools.  He tells us that he is a native who has left and has recently returned to honor the dead; namely, to visit his parents grave.  While he was visiting their graves, it occurred to him how much he wants to show his “gratitude” for the “hospitality” of his “friends” in Kasrilevke By writing this book, he felt he would be doing this.  I want to underscore this element, here, because Aleichem is noting, in the very beginning, that his book is a response to hospitality.  This implies that his representations, no matter how comic or even negative, are kind-hearted and articulate a way of returning kindness for kindness.

What is so fascinating about the final paragraph of the “Author’s Foreword,” is that it works by way of what Ruth Wisse would call “indirection.”  After stating his personal gratitude and the personal cause of this book, the narrator states that he, “of course” doesn’t have “personal motives” for the book. Rather, he writes it in response to “considerations of public service” meaning that he wrote the book in order to “guide strangers visiting Kasrilekve.”  This, he tells us, will help them to know where to get a train, where to go, eat, and have fun.  But at the end of the paragraph he states something that would contradict his present project, what Irving Howe would see as “troubling.”  He notes that “Kasrilevke is no longer the town it used to be.  The great progress of the world has made inroads into Kasrilevke and turned it topsy-turvy.  It has become a different-place.”

This final, sour note gives us a sense of how, in Aleichem, the comic is as Irving Howe would say, citing Saul Bellow: “laughter and trembling are so curiously intermingled that it is not easy to determine the relation between the two.” But, in relation to Howe’s claim, I would also like to emphasize, as does Howe and Sidrah Dekoven Ezrahi, how important place is for Aleichem and how place relates to comedy. After all, the book is all about this place, perhaps the changing place of Jews in Eastern Europe.  Through fiction, Aleichem gives honor to the place and the people.  This, he claims, is not simply personal; it is a “public service.”

Even though Aleichem ends on this somber note of how “it has become a different place,” he changes rhythm and words by “indirection.”  And I want to underscore rhythm because there is a comical music going on at the outset and how this comic music is connected to place.  It addresses what the place has become (which is sad) by way of comedy.  (Laughter and tears, in other words, are intimately related to and emerge out of a place, a world.)

As a comic rejoinder to this sad meditation on place in the “Author’s Foreword,” the narrator points out how, immediately on arrival, he is accosted by a bunch of hotel porters and a sea of yellow: “At the station I was set upon by a horde of yellow porters with yellow whiskers, yellow coats, and bits of yellow tin stuck on their yellow, threadbare caps.”

The cacophony of yellow, so to speak, is coupled by a cacophony of voices calling on the narrator to come to his hotel/place: “Mister! Grand Hotel!” “Hotel Francia, mister!” “Hey, mister, Portugalia” “Mister! Turkalia!”  He tries to avoid this cacophony by moving to another place, but there too he is once again occasioned by a mob.

They are not “civil” and take his bag away from him just to get him to their hotel.  He fights with one to get back what is most important to him: his manuscripts.  Right after he seizes his back, he rushes for the “tramway.”  But when he gets there, he occasions more cacophony this time between passengers, the rider, and the manager.  All of the “noise” is comic and sheer slapstick.  And once it does move, it gets in an accident.

The movements in this text teach us that, for Aleichem, the schlemiel is not simply in the character as in a comic exchange and rhythm: that occur in terms of an erratic movement from place to place, stopping and starting, while comically gesticulating. All the while, there is a blindness and a timing in each movement.  Each thing collides, changes direction, moves no, stops, and repeats this process.  Each event prompts one to move, so to speak, from one vehicle or hotel to another.

But each of these movements, while erratic, is endearing.  In the midst of all this, the narrator is scrambling.  In fact, by the time he gets to the hotel, he has a hard time retaining his cool.  When the hotel manager tells him that he can either be in a room that is infested by bed bugs or a room penetrated by the music of a cantor practicing for the Sabbath or a bunch of Yiddish actors, the narrator is startled.

And for good reason… Given what we have learned from the “author’s forward” we don’t see evidence of hospitality so much as rudeness, he don’t see civility so much as chaos.  More importantly, since we know that he was a native of the town and is now on a visit, we see that he may be lying or have forgotten what really goes on in this town.  Its as if he led us on.

He is startled (and we are startled) by a city that is full of many erratic rhythms.  And, it seems, the narrator is the shlimazel while the town, and all its rhythms, is the schlemiel.  This comes out when, after being told about choosing between music and bedbugs in another room (without music) the narrator chooses the music:

Indeed, in Karilevke, in a town full of schlemiels and permeated by schlemiel rhythms, that seems to be the only option.   And perhaps Aleichem is telling us that to understand the schlemiel, we must first relate to its comic musicality.

Perhaps we hear a similar in Woody Allen’s Zelig but in Allen’s film there isn’t an ambivalent sense of place; there is constant movement and change which echoes what we said in the beginning of this entry; namely, that Jews do what others do and become what they become.  For Allen, as opposed to Aleichem, this music of change, which happens in America, is purely comic. While there are tears, laughter, and music for Aleichem over Kasrilevke, there are no tears for Allen; in relation to America, there is only laughter and music.  Here you can dance the Zelig-dance (“The Chameleon”) without any remorse: