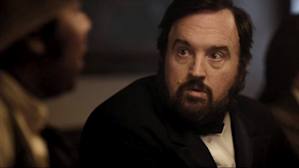 A facebook friend recently cued me in to a website that collected things Louis CK has said about Jews.   Included in the archived videos are a few clips: a clip where Louis CK plays on many different dialects and how speech indicates different kinds of sick lifestyles (the Jewish dialect amongst them), a video on rape where he goes so far as to say, in an aside, that Jews should be raped and follows “did I say that?”; it also includes a clip on Jewish girls (which was removed from Youtube), the “Goodbye Jews” clip that I discussed in the last blog entry on Louis CK, and a clip entitled “Hasidic Cum Tissues” (which was also removed from Youtube).

Regarding this clip, the webpage cites Louis CK as saying:

From the Louis CK page, we learn that the clip was removed by Youtube.  Nonetheless, I wondered if it may have been renamed.  It was.  And it was simply filed under the Opie and Anthony Show.   As their Wiki page points out, Opie (Greg “Opie” Hughes) and Anthony (Cumia) had a show since 1995 and that went on to 2002.  They had a hiatus and went onto XM Satellite Radio in 2006.  The show, over the years, has been host to many comedians including Louis CK.  The energy in and around the show is anxious and highly charged – much like The Howard Stern Show.  The language is heavy and very vulgar. And like Stern, they often disregard political correctness and speak what is on their minds.  And sometimes that can get very risky.

This clip in particular is very vulgar and you may not want to hear or see my reading of it as the clip that I address portrays some Hasidic Jews in a very negative even anti-Semitic fashion.  I found many details that were not mentioned by the person who runs the website or anyone on the web for that matter.  I have noted them below. Read and listen at your own risk.

After saying this, Opie and Anthony come to the rescue and say that while he is right about the Hasidim being a closed society, it woukd be wrong to say that all Hasidim are the same.  Yet, they say Hasidim are “mysterious.”  Louis CK then comes in and talks about some “good” Hasidim he has met at B & H Photo in Manhattan.  He imitates one of the Hasidim who works behind the counter and notes that some can be rude, there, while others “can be nice.”

Louis CK points out, without wincing, that “when she was beating them, she said they were the only clients she ever hit with spite.” Finding her spite (and her beating of the Hasidim) to be justifiable, he notes that the Hasidim had “crossed the line.”  In other words, they deserved a cruel beating.

After justifying her cruel (as opposed to “kind,” normal) whipping, Louis CK notes that she said that she “used to crucify them….and inside, when she was hitting them, she thought ‘You Fucking Jew!’”

Opie then gets going and talks about how he heard of a “tranny” who would make the Hasidim shower because they smelled so bad.  All of the anti-Semitic stuff starts coming here and then a phone-call comes in that is directed at these Hasidim.

The caller who is apparently a cop confirms this claim. And even calls them “filthy, filthy animals.”  Then he says not all of them “…a couple of them.”

What is so disturbing about all of this is not simply the negative anti-Semitic descriptions, but the fact that the topic is simply passed by.  After the cop hangs up, they simply talk about other things.