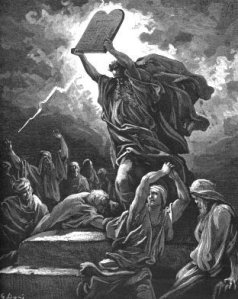 From 1917 until June 1919, Kafka stopped writing entries in his diaries and decided, instead, to write eight notebooks (or what Max Brod, Kafka’s best friend, called the “Blue Octavio Notebooks”).  In these notebooks, Kafka describes and performs his relationship to commandments and being commanded.   The question for Kafka concerns who is giving the commandment: me or the other?

The fourth of Kafka’s Eight Notebooks immediately begins with this pressing question:

Who is the “you” Kafka is speaking to?  Is it himself?  It is as if Kafka is talking to his soul, educating it.  He tells his soul of how the fear of things, terror of the world, leads to idol worship.  And Kafka acknowledges that in apposition to this is another kind of terror: the terror of responsibility!

As Kafka notes, it is “so tremendous” that they “did not even dare to impose it upon one single entity.”  But why?  Kafka tells us because “even the mediation of one being would not have sufficiently lightened human responsibility.”  In other words, the knowledge that nothing can take away this “tremendous” responsibility is equavalent to knowing that one cannot get rid of it.  Howeover, Kafka takes an interesting turn by noting that man is not alone in his responsibility.  In fact, everything “was given responsibility for itself.”

But, more than being alone, Kafka believes his soul should know that these things are not simply responsible for themselves: “they were given a degree of responsibility for man.”

This sounds like a terrifying and a beautiful lesson about responsibility.  But that’s not the end of it.  To be sure, in Kafka’s final movement of his first fragment of the Fourth Notebook, he names this “world” of responsibility naïve yet the “most complicated” of all worlds:

Man could not do enough for his own satisfaction in the creation of counterweights; the naïve world was the most complicated that ever existed; its naivite worked out, in life, exclusively in the brutal logical consequence.

To be sure, this complicated yet naïve world sounds like the world of the schlemiel. In I.B. Singer’s “Gimpel the Fool” on in Shalom Aleichem’s Motl: The Cantors Son, for instance,  Gimpel and Motl are naïve and trustworthy.  Their responsibility to others is illustrated by how much they trust others and all things.   But it is complicated by the fact that they are being lied to or the fact that everyone suffers while they, caught up in goodness, can’t notice.  For the schlemiel, its all good; for us, we can see its not so easy.

Kafka hits on this theme. But what is most interesting is that, from his perspective, the schlemiel must also grappled with responsibility. To be sure, this is what he illustrates.  He grapples with the question of who gives him responsibility and, after this, he grapples with what he calls “commandments.”

This is a settling thought for Kafka.  It is heroic.  And, to be sure, he ends the entry with an image of a hero who runs “before a cart” because he is harkening after the responsibility that he is.

However, his heroism doesn’t last long.  A few entries after this first entry, Kafka, on February 7th, has a fight with himself (or rather a fight with his soul) over the “inner commandment”:

Why do you compare the inner commandment to a dream? Does it seem senseless as in a dream, incoherent, inevitable, making you happy or frightening you equally without cause, not wholly communicable, but demanding to be communicated?

What is most fascinating in this questioning is the fact that, through these questions, Kafka is describing the “inner commandment.”  The most important features being that it is “not wholly communicable, but demanding to be communicated.”

Therefore, the one who must communicate the “inner commandment” (which is not wholly communicable) is a schlemiel.  The one who lives in accordance with tradition is a dreamer.

Kafka, however, struggles with the obeisant schlemiel dreamer:

All that is senseless; for only if I do not obey it can I maintain myself here; incoherent, for I don’t know whose command it is and what he is aiming at; inevitable, for it finds me unprepared, descending upon me as surprisingly as dreams descend upon the sleeper, who, after all, since he lay down to sleep, must have been prepared for dream.

As you can see, Kafka contemplates not keeping the commandment but then realizes that its too late: it has surprised him and he has been overtaken by a dream.

I’ll end on this note.  But I will return to it in my next blog.  To be sure, Kafka’s struggle with the “inner commandment” is a kind of kvetch.  He must obey it, but he thinks its impossible to obey.  He does so anyway.

As a schlemiel, Kafka must struggle with his dream-slash-commandment.

Note: I decided to write on this topic today because it is Shavuot: the Jewish festival which commemorates God’s “giving of the Torah to the Jewish people on Mount Sinai.”

One thought on “Kafka’s Commandment – Take 1”