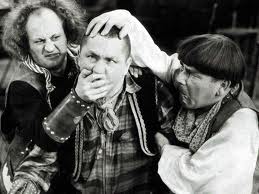 The destructive elements of the American schlemiel cannot be understood apart from the innocent aspects of this character – its childishness.   Likewise, one cannot understand the “destructive element” in Walter Benjamin without understanding its relationship to innocence, childhood, and youth.   Benjamin’s intense interest in childhood and in the daemonic from early on in his life bears evidence of this link.

As I would like to argue, here, and in future blog entries, Benjamin was a schlemiel of sorts and had much interest in comic failures.  He was a man-child.  And, as we see from his work on Kafka, he identified with the comic failure.  However, unlike many Yiddish writers, who saw their task in a more ameliorative light, he understood his obsession with youth and childhood to be a response to a damaged childhood; a response that was, ultimately, destructive.  Nonetheless, he felt it was necessary for himself and for Europe.

When Benjamin was 29 years old, he wrote an essay on Fyodor Dostoevsky’s The Idiot.  In this essay, published in 1921, Benjamin says, quite explicitly, that the “pure word for immortality is ‘youth’.”  And by this he means that it, in a poetic sense, is a dangerous word.  The concept of the “pure word” comes from the German poet Friedrich Holderlin.

In his book on Paul Celan’s poetry entitled Poetry and Experience, Phillip Lacoue-Labarthe likens the “pure word” to a “spasm” and a suspension of meaning. “Poetry is the spasm or syncope of language. Hölderlin called the caesura ‘the pure word’” (49)   But this “spasm” of language cannot be spoken, Benjamin tells us, because the youth have failed.

He notes that Dostoevsky’s “great lamentation in this novel is for the failure of the youth movement.”  The problem, the reason for the movement’s failure, has to do with Russia’s inability to “keep a hold on, or absorb into itself, its own immortality.”  According to Benjamin, this failure explains “why the author of the novel believes that the only salvation for young people and their nation lies in childhood.”  The proof for this, claims Benjamin, can be found in the fact that there are many “childlike figures” in The Idiot.  The novel clings to them, so to speak, out of desperation.

However, according to Benjamin, this turn to childhood, while desperate, is necessary.   Turning back to “childlike simplicity” brings with it “unlimited healing powers.”  This healing was necessary because “this young generation suffers from a damaged childhood: the damaged childhood of the Russian country and people has paralyzed their energies.”  From here, Benjamin ventures a thesis about the “spirit of childhood”; namely, that without this spirit, “noble life” will not develop.

This implies that one must return to this childhood spirit – one must, in effect, return to the schlemiel – if one is to “grow” and become “noble.”  But, Benjamin notes, there is a fundamental problem with the child.  In fact, there is a disaster: it can’t speak.

“The child’s inability to express itself continues to have a crippling effect on the speech of Dostoevsky’s characters in general and an overwrought yearning for childhood….consumes the women in the novel.”

Benjamin saw this “overwrought yearning for childhood” and this “inability to speak” to be signs of disaster.

Benjamin likens the cumulative affect of such speechlessness and such yearning for childhood, compounded by all the childish characters in the book, to a natural disaster; it “resembles the implosion of a gigantic crater.”

Benjamin explains the meaning of this figure: “Because nature and childhood are absent, humanity can only be arrived at via a catastrophic process of self-destruction”(my emphasis).

Much of what Benjamin writes about others is autobiographical and mimetic.  We can see this in his writings on authors he admires such as Franz Kafka and Robert Walser.  We can also see this in his words about Dostoevsky.  Dostoevsky’s failure and damaged childhood are his.  The characters who desperately yearn for childhood reflect Benjamin’s own yearning.  Their inability to express themselves is his.

What does this all lead to?

Benjamin argues that their “overwrought yearning,” which is based on a “damaged childhood,” leads to a “catastrophic process of self-destruction.”

If he doesn’t do this, Benjamin is telling us that he will not be able to live a “noble life.”   Indeed, a noble life is an innocent life.  And that is what he, like Dostoevsky’s characters in The Idiot, desperately yearns.  But, as Benjamin knows, this innocence, though yearned for, is damaged.

Unlike the traditional, Yiddish schlemiel, his hope for a “noble life” doesn’t seem to be in tension with despair.  He knows he must go through self-destruction if he is to rescue youth.  However, he also notes that it may come of itself.  He likens this disclosure of youth to an explosion.

Perhaps the kinetics of schlemiel comedy is based on a kind of chemical breakdown and explosion of new energy.  Perhaps the yearning for innocence and youth, which comes out of a response to a damaged childhood, will lead us to an eruption or breakdown.   One thinks of the eruptions of self-destructive schlemiels like Andy Kaufmann or Lenny Bruce.

Gershom Scholem and Walter Benjamin, to be sure, were both interested in likening modern breakdowns to natural disasters. Scholem likens the Sabbatinan disaster to an exploding volcano.  While Benjamin likens the self-destruction of a culture yearning for youth to the “implosion of a gigantic crater.”

Regardless of the metaphors, both Scholem and Benjamin see something self-destructive in the schlemiel’s actions.  More importantly, this self-destruction, this chemical-slash-comic breakdown of the schlemiel, comes out of a “damaged childhood” and the “failure” of writers, artists, and youth to recover “youth.”

In light of Benjamin’s insight, how do we read this Marx Brothers clip?  Does the breakdown they stage through their comic-kinetics show us an obsession with youth which is based on failure?  Are they paving the road from self-destruction to the “noble life?”   Or are these schlemiels simply….destructive?  What breakdowns do they articulate?:

One thought on “Damaged Childhood: Fools, Self-Destruction, and Reclaiming Youth”